405 Marlborough was designed by architect Samuel D. Kelley and built in 1889 by Keening & Strout Brothers, masons, for jeweler and real estate developer Edwin B. Horn, Jr., one of two six unit apartment buildings (405-407 Marlborough) built for Edwin Horn at the same time. In 1890, he had two additional apartment buildings built, a twelve unit building at 409 Marlborough and a six unit building at 411 Marlborough, both also designed by Samuel D. Kelly and built by Keening & Strout Brothers.

Edwin Horn purchased the land for 405-407 Marlborough on January 16, 1889, the lot for 405 Marlborough from Nelson S. Bartlett, and the lot for 407 Marlborough from Josiah Bradlee. Nelson Bartlett had purchased the lot at 405 Marlborough on February 1, 1887, from Anna Sears Amory, the daughter of William Amory, Jr., and Ellen (Brewer) Amory. Josiah Bradlee had purchased the lot at 407 Marlborough on May 11, 1882, from Anna Sears Amory’s sister, Caroline Brewer (Amory) Lyman, the wife of George Hinckley Lyman, Jr. Both lots had been part of a 134 foot wide parcel purchased by Anna Amory’s and Caroline (Amory) Lyman’s father, William Amory, Jr., on February 10, 1881, from George P. Bangs and Charles P. Horton. All of the land had been part of a parcel purchased on March 1, 1872, from the Boston Water Power Company by a real estate investment trust formed by Grenville T. W. Braman, Henry D. Hyde, and Frank W. Andrews.

Click here for an index to the deeds for 405 Marlborough, and click here for further information on the land on the north side of Marlborough between Hereford and Massachusetts Avenue.

Construction of 405 Marlborough required increasing the height of the party wall with 403 Marlborough by three stories, and in April of 1889, Charles Tilton, owner of 403 Marlborough, filed suit in the Supreme Judicial Court for Suffolk County to prevent construction of windows in the wall. On June 22, 1889, the parties agreed that no openings would be made in the wall “except as necessary for the purpose of repairs” and that “the intendment and purpose of this mutual agreement is that any party wall between said estates shall be in character a solid structure and without permanent opening of any kind.”

In July of 1889, Edwin Horn advertised 405 and 407 Marlborough in the Boston Evening Transcript as having “handsome apartments of 8 rooms with every possible convenience, including passenger elevator. The rooms are large and all outside to air; finished and decorated in the most artistic taste; rents extremely low.”

In August of 1889, Edwin Horn sold 405 Marlborough to attorney Benjamin Lowell Merrill Tower.  An August 29, 1889, advertisement in the Transcript noted that “having been purchased by a gentleman of this city for investment and personal occupancy” the building would be “managed with the utmost regard for convenience of occupants.”

Benjamin Tower took title to the property on October 1, 1889, and he and his wife, Eliza Curtis (Kneeland) Tower, made one of the apartments their home.  They previously had lived at 133 West Concord.

On August 7, 1893, Benjamin Tower transferred the property into his wife’s name.

The Towers continued to live at 405 Marlborough during the 1895-1896 winter season, but moved thereafter to 432 Marlborough. By the next season, they had moved to an apartment at 409 Marlborough.

On January 13, 1896, 405 Marlborough was purchased from Eliza Tower by Robert Waterston Lord, trustee under the will of his maternal grandfather Robert Waterston for the benefit of his mother, Marian Ruthvan (Waterston) Lord, widow of George Clement Lord. The January 14, 1896, Boston Globe report on the sale described the building as “one of the ‘swellest’ in this part of the Back Bay, and comprises a swell front brick apartment house of six units…”.

On December 2, 1902, 405 Marlborough was purchased from Robert Lord by Alonzo N. Burbank. In May of 1902, he had acquired 407 Marlborough. He and his wife, Ann M. (Gale) Burbank, lived in Brookline and later in Newton. He was a founder of the International Paper Company and served as its treasurer and later as its president.

On February 16, 1916, 405 and 407 Marlborough were acquired from Alonzo Burbank by Mrs. Sarah Elizabeth (Williams) Hodson, the former wife of Septimus Hodson. She was a secretary in the real estate offices of J. Sumner Draper and Mark Temple Dowling, and acted as conveyancer of the properties.

The property changed hands and on November 23, 1916, was acquired by real estate dealer William N. Ambler.

On April 12, 1920, Frederick A. Thayer foreclosed on a mortgage given by William Ambler and took possession of 405 Marlborough.

The property changed hands and on November 1, 1922, was acquired by James Madison Todd, an investment banker. He and his wife, Ethel G. (Vivian) Todd, lived in Manchester, Massachusetts. They previously had lived in Cleveland, where he was a coal company executive. 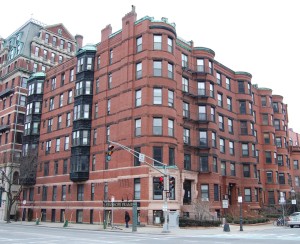 On October 26, 1931, 405 Marlborough was acquired from James Todd by Edward F. McKeon. On May 5, 1933, he transferred the property to the City Institution for Savings in Lowell, which held a mortgage on the property.

In June of 1934, the bank filed for (and subsequently received) permission to increase the number of units from six to ten by subdividing the floor-through apartments on the third, fourth, fifth, and sixth floors.

On February 1, 1937, 405 Marlborough was acquired from the City Institution for Savings by Dryco Properties Inc.

The property changed hands and on September 1, 1967, was acquired by John M. LeCoq, trustee of the 405 Marlborough Street Realty Trust. In April of 1968, the trust filed for (and subsequently received) permission to convert the property from ten apartments into eleven apartments and one office.

405 Marlborough again changed hands and on June 10, 1981, was purchased by Dorothy M. Desmond and James W. Sullivan, trustees of the 405 Marlborough Street Trust

On September 10, 1981, they converted the building into eleven condominium units, the 405 Marlborough Condominium.