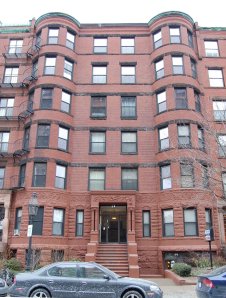 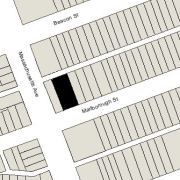 Edwin Horn purchased the land for 409-411 Marlborough on May 1, 1890, from Walter C. Cabot. He had purchased the land on January 17, 1880, from Grenville T. W. Braman, Henry D. Hyde, and Henry M. Whitney, trustees of a real estate investment trust. The land was part of a larger parcel originally purchased by the trust on March 1, 1872, from the Boston Water Power Company.

Click here for an index to the deeds for 409 Marlborough, and click here for further information on the land on the north side of Marlborough between Hereford and Massachusetts Avenue. 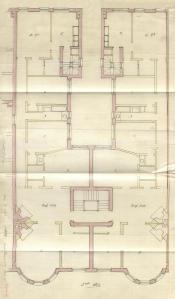 On August 23, 1905, 409 Marlborough was purchased from the Marlboro Associates by attorney and real estate investor Frederick Silsbee Whitwell. He and his wife, Gertrude (Howard) Whitwell, lived at 166 Marlborough. 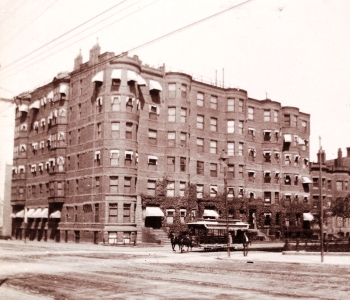 By 1915, 409 Marlborough had been converted from twelve to eighteen apartments.

The property changed hands and on May 29, 1922, was acquired by Grace Maria (Bishop) McClary, the wife of real estate dealer Walter Percival McClary. They lived in Melrose.

On February 14, 1924, 409-411 Marlborough were acquired from Grace McClary by Gibran Kahlil Gibran and Faris Salem Maloof. Gibran Kahlil Gibran was a noted artist, poet, and philosopher, best known for his work, The Prophet. He was unmarried and lived in New York City. Faris Maloof was manager of a wholesale bakery and later would become an attorney and leader of the Syrian and Lebanese American community. He and his wife, Hanny F. (Malouf) Maloof, lived in Jamaica Plain.

On March 4, 1925, 409-411 Marlborough were purchased by George Regina Boardman, the wife of Earl Griswold Boardman. They had married in May of 1924 and lived in Brookline. On May 27, 1926, she transferred the property to her husband’s sister, Clara (Claire) Althea Boardman. Earl and George Boardman divorced in 1928.

On January 20, 1928, Clara Boardman sold a one-half interest in 409-411 Marlborough to Zelda (Jacobson) Greenhood, the wife of attorney Benjamin Harris Greenhood. They lived in Brookline. On June 3, 1931, Zelda Greenhood transferred her interest to her husband.

Clara Boardman married in January of 1933 to Gordon Judson McCurdy. She continued to own a one-half interest in 409-411 Marlborough. 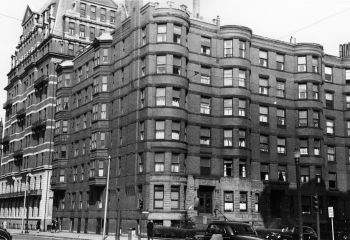 On July 30, 1964, 409 Marlborough was purchased from the Boardmans by Robert M. Cabitt, trustee of the 409 Marlborough Trust, and on July 28, 1966, it was acquired from him by Lee E. Ellison. In July of 1967, he applied for (and subsequently received) permission to convert the property into 36 apartments, 1 retail store, and 1 office.

In February of 1968, he applied for (and subsequently received) permission to amend the permit previously approved for Lee Ellison and change the occupancy to 38 apartments, 1 retail store, and 1 office.

On March 17, 1982, 409 Marlborough was purchased from the Florida-Marlborough Properties Corporation by The Marlborough Group Limited Partnership (Camran, Inc., general partner). In April of 1988, it applied for (and subsequently received) permission to convert the property into 39 apartments and 1 retail store (the office having been converted into a residential unit).

409 Marlborough remained an apartment house and commercial building in 2017.