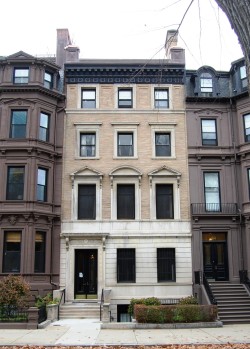 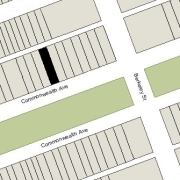 43 Commonwealth was designed by architect Julius A. Schweinfurth and built in 1902 for Ashton Rollins Willard and his wife, Agnes (Fairbanks) Willard.  They previously had lived at 340 Commonwealth. It replaced a townhouse built ca. 1869 which the Willards purchased on March 1, 1902.

Click here for an index to the deeds for 43 Commonwealth, and click here for further information about the land between the north side of Commonwealth and Alley 423, from Berkeley to Clarendon.

Ashton Willard was a lawyer and art historian, author of several books on Italian art.

Agnes Willard died in March of 1910.  Ashton Willard continued to live at 43 Commonwealth with their daughter, Theodora Willard, and his sister, Mary Willard.

Ashton Willard died in October of 1918.  His sister and his daughter continued to live at 43 Commonwealth until 1922. 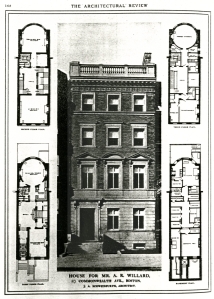 On July 14, 1922, 43 Commonwealth was purchased from Theodora Willard by Mabel (Rothschild) Rosenthal, the wife of leather and wool merchant Louis Rosenthal. They had lived at 261 Clarendon in 1921 and in Beverly earlier in 1922.

Prior to moving to 43 Commonwealth, the Rosenthals had the interior remodeled by architects Bigelow and Wadsworth.  Plans for the remodeling are included in the City of Boston Blueprints Collection in the Boston City Archives (reference BIN G-49).

The Rosenthals continued to live at 43 Commonwealth until about 1947.

On April 7, 1948, 43 Commonwealth was purchased from the Rosenthals, by Michael (Max) Lilly, a partner in the Lilly Construction Company with his father, Harry Lilly, and brother, David Lilly.  Michael Lilly and his wife, Goldie Gertrude (Karess) Lilly, lived at 215 Newbury.

In 1948, he converted 43 Commonwealth into six apartments. Plans for the remodeling, prepared by architect Clark F. Merrick, are included in the City of Boston Blueprints Collection in the Boston City Archives (reference BIN R-88).

On November 3, 1958, 43 Commonwealth was acquired by the Copley Realty Corporation, the treasurer of which was real estate dealer and investor Edward Swartz,

The property changed hands, remaining an apartment house, and was acquired on September 15, 1971, by James H. Currens, trustee of the 61 Mt. Vernon Street Trust. 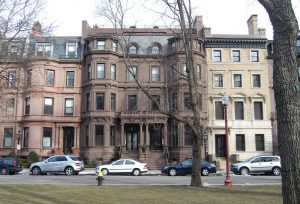 The land for 41-47 Commonwealth was purchased from the Commonwealth of Massachusetts at its October 24, 1860, public auction by shipping merchant John Ellerton Lodge.  He died in September of 1862, and on May 4, 1864, the Commonwealth conveyed the land to his children, Elizabeth James and Henry Cabot Lodge, as his heirs. Elizabeth Lodge had married George James the month before and her one-half interest in the property was held by the trust established under her marriage contract.  Henry Cabot Lodge, who later would become a US Senator, was still a minor, and his widowed mother, Anna (Cabot) Lodge, was his guardian.

By the spring of 1868, the Lodge family had agreed to sell the land to Elijah Drew and on May 11, 1868, he entered into a party wall agreement with Samuel Walley, owner of the lot immediately to the east (where 39 Commonwealth later would be built).

It appears that Elijah Drew had an agreement with John Taylor Clark, a wholesale crockery dealer, under which John Clark took responsibility for having the houses built on Elijah Drew’s land. On May 26, 1868, the Boston Journal reported that John T. Clark had filed a Notice of Intention with the Board of Aldermen to build on Commonwealth. The news report is not specific, but the filing probably was for all four houses.

On January 22, 1869, as the houses were nearing completion, Elijah Drew purchased and took title to the land from Elizabeth Cabot (Lodge) James and Henry Cabot Lodge.

On August 20, 1869, Elijah Drew sold the land at 43 Commonwealth to Eliza (Andrew) Clark’s father, William T. Andrews, as her trustee.

John and Elia Clark continued to live at 43 Commonwealth in 1878, but had moved to Savin Hill in Dorchester by 1879.

By the 1878-1879 winter season, 43 Commonwealth was the home of shoe manufacturer Harold W. Windram and his wife, Adelaide (Snow) Windram.  They had been married in March of 1878, and 43 Commonwealth may have been their first home together.  They continued to live there in 1880, but moved soon thereafter to the Hotel Vendôme.

On August 25, 1880, 43 Commonwealth was purchased from Edward Ingersoll Browne, successor trustee for the benefit of Elizabeth Clark, by molasses and syrup dealer Irving O. Whiting. He and his wife, Angeline Geraldine (Grafton) Whiting, made it their home. They previously lived at 198 Dartmouth.

Daniel G. Grafton, Angeline Grafton’s father, lived with them until his death in December of 1889.

Irving Whiting died in December of 1901, and on March 1, 1902, 43 Commonwealth was purchased from his estate by Ashton and Agnes (Fairbanks) Willard, who demolished it and built their new home in its place. 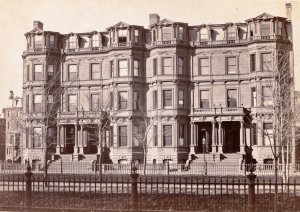