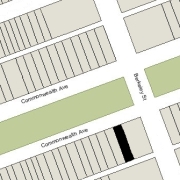 54 Commonwealth was designed by Ahearn-Schopfer and Associates, architects, and built in 1986 as a seven-story, seven-unit apartment building. It was built for the 54 Commonwealth Development Corporation, which is shown as the owner on the original building permit application, dated March 20, 1986. The building was originally proposed to be nine stories, but was reduced to seven stories to comply with the Back Bay’s 65-foot height limit.

54 Commonwealth was built on a lot which had been vacant since 1936, when the original townhouse was purchased and razed by James Allen Mason. In December of 1939, he transferred the lot to William B. Cohen and Lawrence Mason, trustees of Commonwealth-Berkeley Associates. James and Lawrence Mason were brothers (the sons of William and Mae (Rudnick) Mason), and William B. Cohen was their uncle (William Cohen’s wife, Anna (Rudnick) Cohen was the sister of Mae (Rudnick) Mason).

Commonwealth-Berkeley Associates also owned the apartment house next door, at 50 Commonwealth, which they had built in 1925-1926.

Click here for an index to the deeds for 54 Commonwealth, and click here for further information about the land between the south side of Commonwealth and Alley 436, from Berkeley to Clarendon.

On July 27, 1966, 50 Commonwealth and the lot at 54 Commonwealth were acquired from William B. Cohen, his wife Anna (Rudnick) Cohen, and their daughter, Rosalie (Cohen) Geller, trustees of the Commonwealth-Berkeley Associates, by real estate dealer Nathan R. Miller. On March 26, 1971, both properties were purchased from Nathan R. Miller by John T. Manelas, Jr., trustee of the Grosvenor Realty Trust, and on September 18, 1985, both properties were purchased from John Manelas by John R. Giles, trustee of the 50 Capitol Realty Trust.

On February 7, 1986, the lot at 54 Commonwealth was purchased from John R. Giles by the 54 Commonwealth Development Corporation (Robert M. Barsamian, president), which constructed the new apartment house on the lot.

In February of 1988, after the building was completed, 54 Commonwealth Development Corporation converted the building into seven condominium units, the Berkeley Place Condominium.

The original house at 54 Commonwealth was designed by Snell and Gregerson, architects, and built ca. 1866 by Standish and Woodbury, masons. It had been one of four contiguous homes (54-56-58-60 Commonwealth) built at the same time in a Georgian Revival style, with bow fronts and balustraded parapets above the main cornice.

John Sharp died in September of 1890.  Helen Sharp continued to live at 54 Commonwealth with their unmarried daughters, Helen Sharp and Marie Francoeur Sharp. Marie Sharp married in February of 1903 to Frank Brewster, an attorney, and they lived with her mother and sister after their marriage.

In July of 1906, John and Helen Sharp’s son and daughter-in-law, Arthur Russell Sharp and Mary (Sparks) Sharp, purchased and moved to 52 Commonwealth.

Helen (Sayles) Sharp died in April of 1919.  The Brewsters and Miss Helen Sharp continued to live at 54 Commonwealth. They also maintained a home in Devereux, Massachusetts, through about 1930, and in Marblehead thereafter.

On April 15, 1936, 54 Commonwealth was acquired from Marie Brewster’s estate by James Allen Mason. Two days later, he applied for (and subsequently received) permission to demolish the house.  It remained a vacant lot until the mid-1980s. 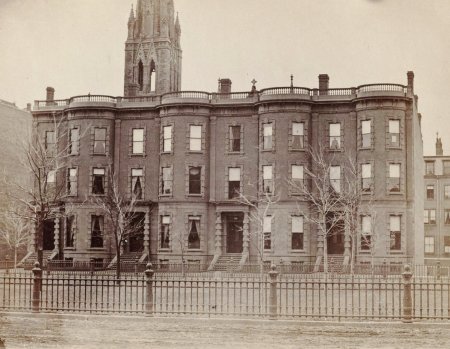 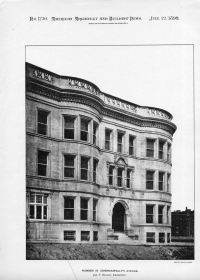 In its July 22, 1899, issue, the American Architect and Building News published two photographs of a recently-completed building identified as “Number 54 Commonwealth Avenue” designed by James T. Kelley. One photograph was of the front façade and the other of the entrance. The only mention in the text of the journal is the reference to the illustrations, in which it is described as “No. 304 Commonwealth Ave., Boston, Mass.”

The attribution of 54 Commonwealth to James T. Kelley has been repeated in various sources, presumably relying on the American Architect and Building News, including the summary of his work published by the Southwest Harbor Public Library. 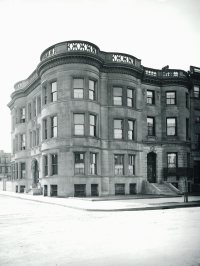 By the 1898-1899 winter season, the Vorenbergs had made 504 Commonwealth their home. They previously had lived at 166 West Brookline. They also maintained a home, Green Gate, in Swampscott.

Simon Vorenberg was a retail clothier. In 1913, he and his half-brother, Felix Vorenberg, a china and glassware merchant, worked with the management of the Gilchrist Company, operators of Gilchrist’s department store, to save the company from bankruptcy, reaching agreement with their creditors to accept 50 cents on the dollar. Simon Vorenberg subsequently served as treasurer of the company and Felix Vorenberg served as Vice President, and later as President and then Chairman of the Board. Felix Vorenberg and Edward Filene are credited with founding the credit union movement in the United States.