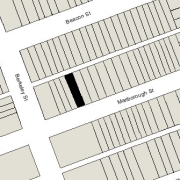 Bainbridge Bunting’s Houses of Boston’s Back Bay does not attribute 29-31-33 Marlborough to a specific architect.  However, a January 1, 1870, article in the Boston Daily Transcript Supplement states that they were designed by the firm of Emerson and Fehmer and built by I. & H. M. Harmon, builders.

The land on which 33 Marlborough was built was part of a larger parcel of land originally purchased from the Commonwealth of Massachusetts on November 6, 1858, by George Goss. He and his partner, Norman Carmine Munson, were the contractors responsible for filling the Commonwealth’s Back Bay lands. The original parcel ran from where 9 Marlborough would be built west to Berkeley Street, comprising 17 lots with either 24 foot or 25 foot frontages. On the same day he purchased the land, George Goss sold the lots to nine different buyers, who then resold them to others.

Between July and October of 1865, Charles William Freeland made a series of purchases from those who had bought land originally part of George Goss’s tract. He assembled a parcel with a frontage of 248 feet where 21-39 Marlborough would be built.

Click here for an index to the deeds for 33 Marlborough, and click here for further information about the land on the north side of Marlborough from Arlington to Berkeley, south of Alley 421.

On December 1, 1869, the land for 33 Marlborough was purchased from Charles Freeland by the estate of Joshua Stetson, who had died in July of 1869. The house subsequently was built for his widow, Ellen (Lamb) Treadwell Stetson. Prior to his death, they had lived at 29 Commonwealth; in 1870, while she was awaiting the completion of 33 Marlborough, she lived temporarily at 145 Beacon. 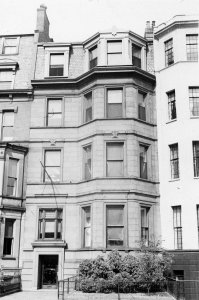 By the 1880-1881 winter season, it was the home of wool merchant Sterne Morse, a widower. He previously had lived at 18 Chester Park. He continued to live at 33 Marlborough in 1885, but moved thereafter to the Hotel Kensington (northeast corner of Boylston and Exeter).

By the 1885-1886 winter season, 33 Marlborough was the home of Miss Emily Mitchell Peirce and Miss Arabella Woodbridge Lawrence, both of whom were teachers and maintained a school for girls at the house. They previously had lived and operated their school at 111 Boylston.

By the 1888-1889 winter season, Misses Peirce and Lawrence had ceased operating their school and Mrs. Stetson converted the house into a two-family dwelling, with Miss Lawrence and Miss Peirce living in one unit, and Dr. Philip Coombs Knapp, a physician, living and maintaining his medical offices in the other. Dr. Henry R. Stedman, also a physician, maintained his medical office with Dr. Knapp; his home was in Bourne but he probably also maintained a Boston residence with Dr. Knapp.

By 1890, Miss Lawrence and Miss Peirce had moved, and their apartment had become the home of James O’Dealy, a cabinetmaker, and his wife, Mary A. (Sheridan) O’Dealy.  They continued to live there until 1906, when they moved to 74 Marlborough.

Dr. Knapp also continued to live and maintain his medical offices at 33 Marlborough.  In December of 1893, he married Isabel (Williams) Stebbins, the widow of John Louis Stebbins.  After their marriage, they lived at 33 Marlborough.

By the 1895-1896 winter season, Ellen Stetson resumed living at 33 Marlborough, living with Dr. and Mrs. Knapp (she is shown as a boarder with them in the 1900 Census).  She continued to live there until her death in October of 1905.

On February 14/16, 1906, 33 Marlborough was acquired from the heirs and estate of Joshua Stetson by Jessie Maria (Whitman) Means Little, the wife of architect Arthur Little. They lived in Swampscott and later in Wenham.

By the 1906-1907 winter season, 33 Marlborough was the home of Samuel Parker Bremer and his wife, Mabel Ruth (Burrage) Bremer. They had lived at 82 Marlborough in 1906.  They also maintained a home in Manchester.

Samuel Parker Bremer was a dry goods merchant and an executive of several woolens manufacturing companies.

On June 28, 1916, Samuel Bremer purchased 33 Marlborough from Jessie Little. That same month,, he filed for (and subsequently received) permission to lower the front entrance to ground level and add a rear ell.  The remodeling was designed by Kilham and Hopkins, architects.  Plans for the remodeling, in very poor condition, are included in the City of Boston Blueprints Collection in the Boston City Archives (reference BIN L-49).

The Bremers continued to live at 33 Marlborough during the 1924-1925 winter season, but moved thereafter to The Fensgate at 534 Beacon. S. Parker Bremer died in November of 1925, a suicide.

During the 1925-1926 winter season, 33 Marlborough was the home of note and investment broker Benjamin Perley Poore Moseley and Elizabeth Whitwell (Thomas) Moseley. They also maintained a home in Ipswich. They had moved from 33 Marlborough by the next season, and by 1927-1928 season had made 327 Commonwealth their Boston home.

On September 21, 1926, 33 Marlborough was purchased from the estate of S. Parker Bremer by Katherine Lee Bayard (Warren) Thayer, the wife of investment banker John Eliot Thayer, Jr. They had lived at 77 Marlborough during the previous season. They also maintained a home in Lancaster. They separated in 1933 and subsequently divorced. She continued to live at 33 Marlborough during the 1933-1934 winter season, but moved to Lancaster thereafter.

In 1934, 33 Marlborough became the home of banker and investment broker John J. Moran and his wife, Katherine C. (Berigan) Moran. They previously had lived in Brookline. They continued to live at 33 Marlborough until about 1938, when they moved to an apartment at 301 Berkeley. 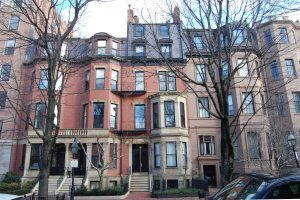 On September 24, 1937, 33 Marlborough was purchased from Katherine (Warren) Thayer by textile manufacturer John Moseley Abbot and his wife, Anita (Whittaker) Abbot. They also maintained a home, Bletchingly, in Beverly Farms. They continued to live at 33 Marlborough until about 1950.

In June of 1950, Louis Heller applied for (and subsequently received) permission to convert the house into a three-family dwelling.

On November 10, 1953, they transferred the property into Elizabeth Heller’s name.

The Hellers continued to live at 33 Marlborough until about 1959, when they moved to 165 Mt. Vernon.  In September of 1963, they purchased and moved to 11 Commonwealth.

On November 25, 1959, 33 Marlborough was acquired from Elizabeth Heller by Dr. Jost J. Michelsen, a physician and surgeon, and his wife, Ruth Hazel (Winebrenner) Scotvold Michelsen.  They previously had lived at 253 Marlborough.  It remained a three-family dwelling.

On December 28, 1986, the Michelsens converted the house into three condominium units, the 33 Marlborough Street Condominium.