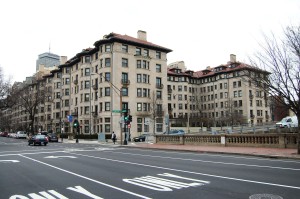 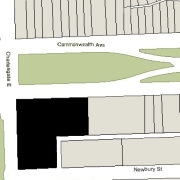 400-416 Commonwealth (30 Charlesgate East) was designed by architect Arthur H. Bowditch and built in 1897-1899 as a six story hotel, The Somerset (later known as the Hotel Somerset and Somerset Hotel). It was built for the Somerset Trust, organized by Francis Peabody, Jr., and Henry M. Williams.

The Somerset was built on two lots purchased on September 18, 1897, by Francis Peabody, Jr., and Henry Williams, the lot at the southeast corner of Commonwealth and Charlesgate East, with a frontage of 133 feet on each street, which they purchased from Nathaniel Thayer and Eugene Van Rensselaer Thayer, and the lot at the northeast corner of Newbury and Charlesgate East, with a frontage of 125 feet on Newbury and 98 feet on Charlesgate East, which they purchased from the estate of Abbott Lawrence. Both lots originally were part of one of four parcels purchased from the Boston Water Power Company on October 15, 1880, by Henry Melville Whitney, Grenville Temple Winthrop Braman, and Henry Dwight Hyde, trustees of The Park Entrance Lands Trust.

Click here for an index to the deeds for 400-416 Commonwealth, and click here for further information on the land on the south side of Commonwealth between Massachusetts Avenue and Charlesgate East.

Construction started in October of 1897 and the hotel opened on March 1, 1899. Like the Hotel Vendôme further east on Commonwealth, The Somerset accepted both travelers and permanent guests. 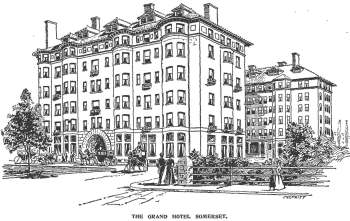 A March 1, 1899, Boston Globe article on the hotel’s opening described it as “among the distinctively magnificent hotels of the world.”

“It is built on three sides of a quadrangle, facing Charlesgate-east, with a large court yard in front. It is six stories high, with exterior walls of grey sandstone, and a roof of red tiles, and it is nearly fireproof as modern construction can approach it.”

“Above the first floor there are 250 rooms, every one of which some time during the day gets the sun. .. Electricity is used throughout the building for lighting, and no gas or gas piping has been put into the building. Steam is used for heating purposes. All the rooms have not been furnished because such rooms as are to be leased to permanent guests will in all probability be furnished by the occupants to their own tastes, unless furnished apartments are desired.”

“The upper floor of the hotel is arranged for the maids of the guests and for the servants of the hotel. … All the wood finish above the first floor is in sycamore and all the doors are of an exclusive and new pattern. Each door contains but two large panels, a square panel at the top and a large oblong panel below it.”

The article described the public rooms at length, noting that “the frontage on Charlesgate-east is over 200 feet, and with the exception of the easterly wing all of this floor is utilized for public rooms.”

“From the easterly to the westerly wings runs the main corridor, a pure reproduction of the Louis XIV style, as portrayed in the palace of Versailles” with a vaulted ceiling, columns, and walls “paneled in gold and silver damask. … In the middle of the grand corridor, opposite the entrance to the palm room, is the grand stairway. It is 12 feet wide, of white marble, with a solid balustrade of in white and a broad railing of mahogany.”

“The breakfast room, or palm room, occupies the central position of the main building. The ribbed ceiling is worked in an early English design, Around the walls is a paneled wainscoting rising to within three feet of the ceiling and colored in olive green enamel.”

“The main dining room, at the corner of Commonwealth av and Charlesgate-east, is furnished after the style of the Jacobean period. In size, the room is 45 by 60 feet, without a pillar or other intervening support for the ceiling. Two massive mahogany beams, 30 inches deep, divide the ceiling into three bays. These beams, as well as the panels framing the spaces between the windows, all bear the lavish decoration of the Jacobean period.”

“From the easterly end of the grand corridor the stairway leads to the ballroom, which is located in the basement. A marble staircase with sides of Parian marble leads from Newbury st. The ballroom is 40 by 60 feet in dimensions, and is finished in crimson, gold, and white. The ceiling is divided by massive beams, supported by columns of parian marble.”

When it was built, The Somerset occupied the end of the block between Commonwealth and Newbury on a lot with a frontage of 133 feet on Commonwealth (at 416 Commonwealth) and 231 feet on Charlesgate East.

On March 4, 1901, Francis Peabody, Jr., and Henry M. Williams established a new trust, the Somerset Hotel Trust, to which they subsequently transferred the hotel.

On May 27, 1901, the new trust purchased the vacant lot immediately to the east on Commonwealth, with a frontage of 100 feet, from John C. Haynes.  The lot also originally had been part of the land purchased on October 15, 1880, from the Boston Water Power Company by The Park Entrance Lands Trust.

The Somerset Hotel Trust constructed an annex at 400 Commonwealth on the newly acquired land, increasing the total number of rooms from 250 to 350. In its May 29, 1901, article on the land purchase, the Boston Globe noted that the addition would “conform in style and architecture with the original building,” and that the plans “have been prepared in the office of Arthur H. Bowditch and Roland G. Hart will be the superintending architect.”

The Hotel Somerset rapidly became one of Boston’s premier hotels, the locus for balls, cotillions, and weddings as well as the hotel of choice for visitors from the political, social, and entertainment worlds, ranging from Gloria Swanson to the Beetles. 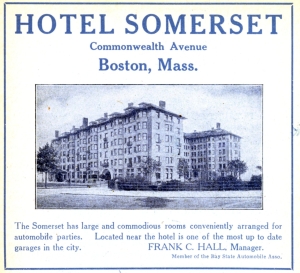 In December of 1904, the Somerset Hotel Company was organized to operate the hotel under a lease from the Somerset Hotel Trust, with Arthur Edward Childs as president. He and his wife, Alice Grant (Moen) Childs, lived at 121 Bay State Road. He later also served as president of the Columbian National Life Insurance Company and the Light, Heat, and Power Corporation (later the Massachusetts Lighting Company).

On May 29, 1936, the Hotel Somerset was acquired from the Somerset Hotel Trust by the Boston Five Cents Savings Bank, which held two mortgages on the property.

On August 7, 1936, the property was acquired from the bank by the Somerset Hotel Company. Glenwood J. Sherrard, who also owned the Parker House hotel and the Bellevue Hotel, was president of the company. A July 28, 1936, Boston Globe article on the impending sale noted that “An extensive program of improvements and rehabilitation involving an expenditure of close to $200,000 designed to make the Somerset one of the most modern hotels in the city, is scheduled to begin immediately.”

On June 30, 1942, the Somerset Hotel Company transferred the property back to the Boston Five Cents Savings Bank.

From 1942 to 1945, the Hotel Somerset was used by the US Navy to house sailors who were studying at the naval training school at Wentworth Institute. An August 30, 1942, article from the Milwaukee Sentinel described the hotel’s use:

“‘The ‘U.S.S. Somersault’ — formerly the Somerset hotel — has demonstrated what smooth sailing means to a navy that is temporarily land-locked. When the navy took over the hotel to house several hundred sailors, while they studied at nearby Wentworth Institute, the hotel staff undertook the task of keeping them happy. Menus were changed, rooms stripped of unnecessary furnishings and tiers of double bunks installed, and a WPA band moved in to furnish dinner music.”

On December 1, 1944, the Hotel Somerset was acquired from the Boston Five Cents Savings Bank by Somerset Hotel, Inc. Edward Bryce Bell was president and managing director, and undertook renovating and refurbishing the property so that it could return to use as a hotel.

In its October 31, 1952, article on the opening of the new, expanded hotel, the Boston Globe wrote: “The Somerset Hotel took on a ‘new look’ yesterday with the official opening of its new lobby and entrance. The consolidation of the Somerset with the Hotel Puritan has made possible one large hostelry containing 524 rooms. The main lobby, constructed with a coral terrazzo floor, plastered green walls, and a ceiling of the latest acoustical material, has a 33-foot curved desk of green Italian marble and two tone plate glass. Iron trim stairways connect with the terrace lobby, formerly the street level of the Puritan, and with the lower level of the Puritan, where a dining room, cocktail lounge and coffee shop are located. Smart shops open off the terrace lobby.”

In 1955, the Somerset Hotel installed an outdoor swimming pool in the patio area facing Charlesgate East.

In November of 1957, the hotel applied for (and subsequently received) permission to install a “macademized open-air parking lot” on the vacant lot at 388 Commonwealth.

An October 20, 1960, Boston Globe article on the impending sale indicated that it “stems from the fact that the contract which H. C. A. [Hotel Corporation of America] has with Prudential Insurance Company to run the 1000-room hotel in its huge Back Bay development requires H. C. A. to confine its local hotel activities to the Prudential operation.”

On January 31, 1966, the re-acquisition of the properties was achieved through a foreclosure of the mortgage given by Louis Berry and his partners to the Cleveland Hotel Corporation, which took possession of the properties and transferred them on the same day to the S. H. Corp.

The Hotel Corporation of America resumed operation of the properties and in 1966-1967 it constructed a 352 car garage at 425 Newbury.

On October 15, 1971, the Boston Globe reported that a “preliminary understanding” had been reached to sell the Somerset Hotel to real estate developer Pasquale Franchi, “who reportedly plans to renovate the Somerset into a luxury apartment building.” He also was in the process of renovating the Hotel Vendôme.

Over the next three years, Pasquale Franchi converted the buildings into 187 apartments, a night club, shops, and offices. The entirety of 390 Commonwealth was devoted to office and commercial space.  425 Newbury remained a garage.

On July 19, 1976, the Savings Bank Trust Company foreclosed on a mortgage given by The Somerset Building, Inc., and took possession of the property.

The properties subsequently changed hands, including going through foreclosure again, and on January 29, 1982 were acquired by the 400 Commonwealth Avenue Apartments LP.

In August of 1981, the 400 Commonwealth Avenue Apartments LP filed for (and subsequently received) permission to remodel the apartments on the north side of the building, noting that this was Phase I of its remodeling. The legal occupancy of the building remained “187 apartments, coffee shop, flower shop, keyboard lounge, rib room restaurant, music halls I and II, and restaurant.”

In March of 1983, 400 Commonwealth Avenue Apartments LP sold 388-390 Commonwealth to Frederic W. Rust, trustee of the Puritan Investment Trust. The purchase included an interest in the Somerset garage at 425 Newbury. He subsequently remodeled 390 Commonwealth into residential units and built a new building at 388 Commonwealth, joined with 390 Commonwealth, and converted them into the Windsor Place Condominium.

On February 12, 1985, the condominium association amended the master deed to conform it with the legal occupancy, specifying 117 residential units and 4 commercial units.