117 Commonwealth was designed by architect Charles K. Kirby and built in 1871, probably for speculative sale, on land which he purchased from the Commonwealth of Massachusetts on August 24, 1871.

Click here for an index to the deeds for 117 Commonwealth, and click here for further information about the land between the north side of Commonwealth and Alley 424, from Clarendon to Dartmouth.

On October 2, 1871, 117 Commonwealth was purchased from Charles Kirby by wholesale dry goods merchant Walter Hastings, Jr.  He and his wife, Elizabeth Diantha (Glidden) Martin Hastings, made it their home. They previously had lived in Charlestown.

Walter and Elizabeth Hastings continued to live at 117 Commonwealth during the 1876-1877 winter season, but moved thereafter to 115 Commonwealth. 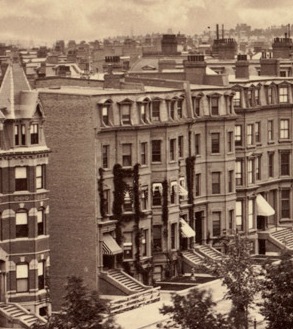 113-117 Commonwealth ca. 1879 (with empty lot at 119 Commonwealth), detail from photograph of the north side of Commonwealth looking east; courtesy of the Boston Public Library

On March 12, 1878, 117 Commonwealth was purchased from Walter Hastings by merchant and banker Ezra Howes Baker, Jr.

Ezra Baker and his wife, Mary Ann (Martyn) Baker, made 117 Commonwealth their home.  They previously had lived at 22 Worcester. In 1881, they built a stable at 350 Newbury; it remained in the Baker family until 1899.

Charles Baker, an investment banker, married in October of 1886 to Edith Clarke Demmon.  After their marriage, they moved to the Longwood district of Brookline.

Ezra Baker died in June of 1888, and on June 1, 1889, his estate transferred 117 Commonwealth to Mary Ann Baker. She continued to live there with her unmarried children, Ezra, Arthur, and Esther.

Arthur Baker moved to Colorado Springs in about 1889, where he became a broker dealing in mining stock.

Ezra Baker, an investment banker, married in November of 1892 to Martha Gertrude Keyes.  After their marriage, they lived at 294 Marlborough. 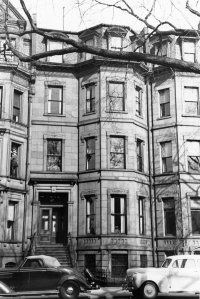 John Hitchcock died in August of 1910. Esther Hitchcock and their children continued to at 117 Commonwealth live with her mother.

Mary Ann Baker died in December of 1917. Esther Hitchcock continued to live at 117 Commonwealth until her death in August of 1945.

On December 20, 1945, 117 Commonwealth was acquired from Mary Ann Baker’s estate by real estate dealer Julius Kalman (Kalmanovitz). That same month, he applied for (and subsequently received) permission to convert the property into eight apartments.

In March of 1954, Julius Kalman’s real estate firms had been identified as among the victims of George L. Maitland, who had been indicted for obtaining loans based on fraudulent representations. On February 6, 1956, Julius Kalman committed suicide at his home in Allston. The Boston Globe reported that the suicide was “on the eve of one of the trials growing out of the so-called Maitland loan fraud case” in which he “was to have been a star witness” for the prosecution.

On March 29, 1957, Haven Realty transferred 117 Commonwealth to Jennie Loitman Barron, Mark R. Werman, and Jacob Grossman, executors of the will of Julius Kalman.

On August 26, 1958, 117 Commonwealth was acquired from Julius Kalman’s estate by real estate dealer Lester Werman and his wife, Ruth (Ehrlich) Werman. They lived in Waban. Lester Werman was the brother and business associate of Mark Werman, an insurance broker, former treasurer of Haven Realty, and one of Julius Kalman’s executors.

On May 25, 1977, 117 Commonwealth was purchased from Lester and Ruth Werman by William B. Allred, an engineer. In May of 1978, he applied for (and subsequently received) permission to increase the number of units from eight to nine.

On June 9, 2000, 117 Commonwealth was purchased from the Allred Nominee Trust by 117 Commonwealth Realty Inc. Norman S. Drubner, president and treasurer). In May of 2000, prior to taking title, it had applied for (and subsequently received) permission to remodel the property and reduce the number of units to two.