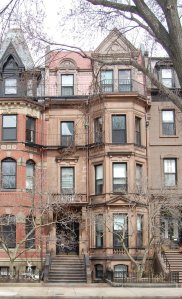 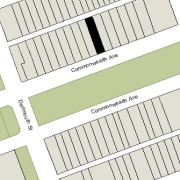 119 Commonwealth was designed by Bradlee and Winslow, architects, and built in 1879-1880 by Standish & Woodbury, builders, as the home of Samuel Newell Brown and his wife Ruth (Ruthy) Coombs (Haskell) Brown. Ruthy Brown is shown as the owner on the original building permit application, dated October 1, 1879.

Samuel Brown was a dealer in scales, doing business (in 1885-1890) as Fairbanks, Brown & Co. and selling the Fairbanks Scale. He also owned a number of hotels, including the New Ocean House in Swampscott.

Click here for an index to the deeds for 119 Commonwealth, and click here for further information about the land between the north side of Commonwealth and Alley 424, from Clarendon to Dartmouth.

By the 1880-1881 winter season, Samuel and Ruthy Brown had made 119 Commonwealth their home.  They previously had lived at 1 Huntington Avenue, on the northwest corner of Huntington and Dartmouth, where the Boston Public Library later would be built.

Ruthy Brown’s unmarried sister, Grace Harriet Haskell, lived with them, first at 1 Huntington and then at 119 Commonwealth.

Ruthy Brown died in March of 1909. Samuel Brown inherited 119 Commonwealth and continued to live there. Grace Haskell lived there with him during the 1909-1910 winter season, but moved thereafter to Brookline. 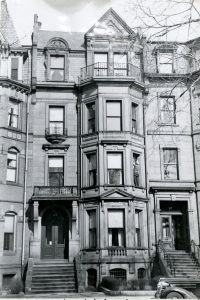 In October of 1910, Samuel Brown married again, to Charlotte Thompson (Ames) Bradford, the widow of Joel P. Bradford. On September 27, 1910, in anticipation of their marriage, Samuel Brown transferred 119 Commonwealth into her name.

Samuel Brown died in July of 1912, at his New Ocean House Hotel.  Charlotte Brown continued to live at 119 Commonwealth.

On December 4, 1912, Charlotte Brown transferred 119 Commonwealth to Harold H. Brown, Samuel Brown’s son by his first marriage. She died in January of 1913.

On September 14, 1914, 119 Commonwealth was purchased by Mary Gertrude (Sutton) Russell, the wife of Richard Spofford Russell. They previously had lived at 491 Commonwealth.

Richard Russell was president of William A. Russell and Brother, the investment banking firm that managed the Russell family’s manufacturing and mining businesses.

The Russells also maintained a home, Oakland, in North Andover, where Richard Russell’s father, paper manufacturer and Congressman William Augustus Russell, had an estate, Lakeview Farm.  Lakeview Farm subsequently became the site of the Brooks School, a preparatory boarding school founded by Rev. Endicott Peabody in 1926, and Richard and Mary Russell’s home became a dormitory for the school.  Richard Russell served as treasurer of the school.

On November 6, 1936, 119 Commonwealth was acquired from Richard Russell by Anna C. Tuohy, an attorney.

On September 4, 1937, 119 Commonwealth was acquired by Walter R. Scott, who reconveyed the property to Mrs. Susan Jane (Northridge) Taylor Jones, the widow of Thomas Brierley Taylor and the former wife of David R. Jones, who lived at 59 Commonwealth.

On the same day, Susan Taylor Jones transferred the property to her daughter, Lucille F. (Taylor) Clarke, the widow of Lawrence Clarke, who operated it as a lodging house. She previously had lived with her mother at 59 Commonwealth. She also maintained a home in Marshfield.

In 1940, Lucille Clarke remarried to Robert W. Norris. In November of 1943, she applied for permission to convert 119 Commonwealth from a single-family dwelling into a lodging house, legalizing its current use. She subsequently abandoned the permit, but the property continued to be operated as a lodging house.

On May 6, 1944, 119 Commonwealth was acquired from Lucille Norris by her first cousin, Charles Leroy Northridge and his wife, Ann (Lundberg) Northridge. They previously had lived at 265 Clarendon.  He was the son of Susan (Northridge) Taylor Jones’s brother, William H. Northridge.

In June of 1944, Ann Northridge applied for permission add a fire escape at the rear of the house and convert it from a single-family dwelling into a lodging house.  She subsequently abandoned the permit, but in April of 1946, she once again filed for (and subsequently received) permission to add a fire escape at the rear.  In that application, she indicated that the building’s current and proposed use would be as a single-family dwelling.  However, based on the Boston Lists of Residents, it appears that she nevertheless continued to operate it as a lodging house.

On June 2, 1953, 119 Commonwealth was acquired from the Northridges by Edward J. Goodfellow and his wife, Mary Dorine (Jewers) Goodfellow. They lived there and continued to operate it as a lodging house. They previously had lived in an apartment at 247 Beacon.

Edward Goodfellow was a salesman. In the early 1960s, he became the proprietor of the Colonial Lounge Bar at 981 Tremont in Roxbury.

In December of 1969, the Goodfellows acquired 121 Commonwealth.

The Goodfellows lived at 119 Commonwealth until the mid-1970s, when they moved to Florida.

On August 23, 1974, 119 Commonwealth was acquired from the Goodfellows by their son-in-law and daughter, John DeMusis and Mary C. (Goodfellow) DeMusis. They lived in one of the apartments. In November of 1974, they applied for (and subsequently received) permission to legalize the occupancy as eight apartments and six lodgers, noting that “this has been an existing condition for many years.”

In August of 1976, John and Mary DeMusis acquired 121 Commonwealth from the Goodfellows.

In July of 2000, John and Mary DeMusis filed for (and subsequently received) permission to change the occupancy of 119 Commonwealth to seven apartments and six lodgers.

119 Commonwealth remained an apartment building in 2016.