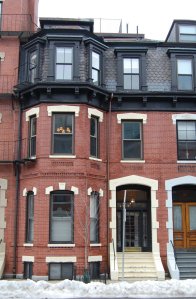 12 Gloucester was designed by architect John H. Besarick and built in 1872 by carpenter and building contractor Hiram A. Gerrish, one of a symmetrical pair (10-12 Gloucester) and one of four contiguous houses (334 Marlborough and 10-12-14 Gloucester), built for speculative sale. Hiram Gerrish is shown as the owner on the original building permit application for all four houses, dated June 4, 1872.

Hiram Gerrish purchased the land for 10-12-14 Gloucester and 334 Marlborough on June 26, 1872, from George Martin Gibson, also a builder and contractor. George M. Gibson had purchased the land on March 1, 1872, from a real estate investment trust formed by Grenville Temple Winthrop Braman, Henry Dwight Hyde, and Frank William Andrews. The land was part of one of several tracts of land the trust had purchased that same day from the Boston Water Power Company.

Click here for an index to the deeds for 12 Gloucester, and click here for further information about the land between the south side of Marlborough and Alley 428, from Gloucester to Hereford.

On September 7, 1872, when the houses were under construction, Hiram Gerrish sold all four to George M. Gibson’s son, George Alonzo Gibson. He was a builder and contractor in business with his father, and later would become a lawyer and, after that, a piano manufacturer. On January 25, 1873, when the houses were substantially complete, Hiram Gerrish acquired them back.

On November 11, 1873, all three houses were offered for sale at public auction. A November 5, 1873, Boston Traveller advertisement by auctioneer J. L. Porter noted that “each house contains 12 well arranged rooms, large closets, together with all modern improvements to be found in first class houses.  Finished in hard wood, making them very desirable for first class residences.”

12 Gloucester was purchased at the auction by Charlotte (Willet) Ellis, the widow of George Ellis.  Neither 10 Gloucester nor 14 Gloucester sold.

Charlotte Ellis made 10 Gloucester her home.  She previously had lived at 20 Highland, where her husband had died in April of 1873. Their three surviving children – George Ellis, Charlotte Ellis, and Mary W. Ellis – lived with her.

George Ellis married in December of 1875 to Alice Mary Shackford. After their marriage, they lived at 12 Gloucester with his mother and sisters. He was a commission merchant.

They continued to live at 12 Gloucester during the 1881-1882 winter season, but moved thereafter to Jamaica Plain.

On October 2, 1882, 12 Gloucester was purchased from Charlotte Ellis by attorney Charles Montgomery Reed. He and his wife, Maria Ames (Carlisle) Reed, made it their home. They previously had lived at 6 Bulfinch Place. They also maintained a home in Boxford.

In April of 1896, Charles Reed transferred 12 Gloucester into his wife’s name.

George Henry Thayer, his wife, Cordelia (Skinner) Thayer, and their adult son, Lucian Skinner Thayer, lived with the Reeds as lodgers from about 1898.  George Thayer was a dealer in dyestuffs.  They had lived at 125 Marlborough in 1897.  They continued to live with the Reeds during the 1901-1902 winter season, but moved thereafter to an apartment in The Francesca at 46 Hereford.

In April of 1905, Charles Reed was charged with embezzling funds from an estate for which he was trustee.  He pleaded guilty and was sentenced to six-to-eight years in state prison.  Maria Reed moved to an apartment at 155 Massachusetts Avenue with their four adult children: Montgomery Reed, a lawyer; Carlisle Reed, a physician; Margaret Carlisle Reed; and Katharine Montgomery Reed. She continued to own 12 Gloucester and lease it to others.

By 1906, 12 Gloucester was the home of attorney Edmund Kent Arnold and his wife, Pearl (Butler) Arnold. They previously had lived in Lexington.

Charles Reed died in December of 1920, and on May 27, 1921, Maria Reed sold 12 Gloucester to Edmund Arnold. The Arnolds also maintained a home in Manchester, Massachusetts.

They continued to live at 12 Gloucester during the 1931-1932 winter season, but moved thereafter and by 1934 were living at 262 Commonwealth, as lodgers.

In January of 1936, Viola Davis applied for (and subsequently received) permission to convert 12 Gloucester from a single-family dwelling into three apartments.  She lived in one of the apartments.

By 1937, she had moved to 2 Strong Place, and in May of 1942, she married Edward William Thomas. After their marriage, they lived in Amherst, New Hampshire.

From about 1937, one of the apartments at 12 Gloucester was the home of Frank Heber Merrill and his wife, Esther Corinne (Link) Merrill. They previously had lived in Winchester. He was president and treasurer of the Andrews Paper Company. They continued to live at 12 Gloucester until the late 1940s.

From about 1942, one of the apartments at 12 Gloucester was the home of Henry H. Hill, a life insurance broker, and his wife, Marion Coffin (Kelley) Hill. They continued to live there until his death in January of 1967.

On September 13, 1943, 12 Gloucester was acquired from Viola Thomas by Scott K. Wainwright.

By the mid-1940s, the number of apartments had been increased from three to four.

The property changed hands and on April 11, 1946, was acquired by William Randolph Taylor, a furniture dealer, and his wife, Ruth Ranghild (Weckstrom) Taylor. They lived in one of the apartments. They previously had lived at 122 Bowdoin. Before their marriage in 1943, he had .lived at 169 Commonwealth with his mother, Susan Jane (Northridge) Taylor Jones, the widow of Thomas Brierley Taylor and the former wife of David R. Jones.

On April 28, 1948, 12 Gloucester was acquired from the Taylors by Richard K. de L’Etoile, and on May 13, 1949, he transferred it to the Kenson Engineering Corporation, of which he was the president and treasurer.

The property changed hands and on May 17, 1963, was acquired by Thomas Joseph Prisk, Jr., and his wife, Jean Marie (Manby) Prisk. He was a research manager with Prudential Insurance. They lived in one of the apartments.

On July 12, 1967, 12 Gloucester was acquired from the Prisks by Ralph E. Torchio, trustee of the Underwood Realty Trust.

The property changed hands and on July 6, 1972, was acquired by William Lewis Hodgins, a noted residential interior designer.

On September 7, 1979, 12 Gloucester was purchased from William Hodgins by Andrew R. Rose and Gerald Gouchberg, trustees of Northern Rose Realty Trust. On the same day, it was acquired from them by Eraldo A. De Santis.

In March of 1982, Eraldo De Santis filed for (and subsequently received) permission to legalize the occupancy as four apartments, which he indicated was an existing condition.

On April 22, 1982, 12 Gloucester was purchased from Eraldo DeSantis by George Lewis, Jr.

In November of 1982, he applied for (and subsequently received) permission to erect a new dormer replacing an existing dormer.

On April 7, 1983, he converted the property into four condominium units, the Twelve Gloucester Street Condominium.