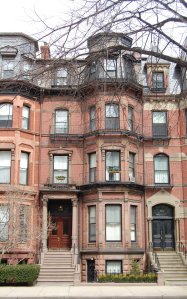 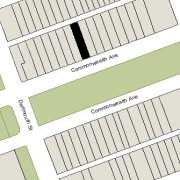 123 Commonwealth was designed by architect William G. Preston and built ca. 1872, one of two contiguous houses (123-125 Commonwealth) designed in the same style.

Click here for an index to the deeds for 123 Commonwealth, and click here for further information about the land between the north side of Commonwealth and Alley 424, from Clarendon to Dartmouth. 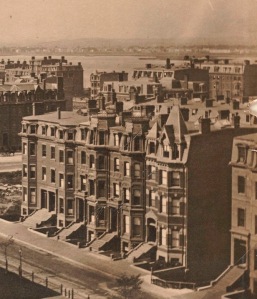 Elizabeth Kendall continued to live at 123 Commonwealth during the 1880-1881 winter season; her unmarried son, William Beals Kendall, a stockbroker, lived with her. They had moved by the 1881-1882 season, possibly to New York City, where William Kendall married in February of 1883 to Kate Varnum Whitney.  By the 1883-1884 season, Elizabeth Kendall was living at 321 Commonwealth.

On January 25, 1881, 123 Commonwealth was purchased from Elizabeth Kendall by Elizabeth Nancy (Cummings) Butler, the wife of Charles Shorey Butler. He was a dealer in leather and hides. They previously had lived at 35 Union Park.

They continued to live at 123 Commonwealth during the 1884-1885 winter season, but moved thereafter to the Hotel Brunswick (southeast corner of Clarendon and Boylston).

On June 15, 1885, 123 Commonwealth was purchased from Elizabeth Butler by Anna (Weld) Perkins, the wife of Naval Captain (later Commodore) George Hamilton Perkins. They previously had lived at 284 Marlborough. They also maintained a home, The Box (Winnepauket Farm), in Webster, New Hampshire, and the De Rham cottage in Newport. Their daughter, Isabel Weld Perkins, lived with them.

William F. Weld had died in December of 1881, and, after specific bequests to his wife, children, and others, he left his residual estate to his four grandchildren: Charles G. Weld and William F. Weld (the sons of William Gordon Weld) Isabel Perkins, and Mary Pratt, to be held in trust until they reached the age of 25. Mary Pratt was born in 1871 and Isabel Perkins was born in 1876, and as they grew to adulthood, they were frequently mentioned in the society columns with reference to their wealth.

Isabel Perkins married in June of 1897 to Larz Anderson. The wedding reception was held at both the Perkins house at 123 Commonwealth and her aunt’s house at 127 Commonwealth, with (according to the Boston Globe’s report), “the two buildings being connected by a closed gallery constructed in the rear.”  The houses had similarly been joined together by a temporary rear gallery in November of 1891, when her cousin, Mary Pratt, married Charles Franklin Sprague.

Larz Anderson was a diplomat and, prior to their marriage, served in the US Embassies in London and Rome.  During the Spanish American War, he was a Captain and Assistant Adjutant General of Volunteers, and in 1911, was appointed as Envoy Extraordinary and Minister to Belgium.  In 1912-1913, he served as Ambassador to Japan.

After their marriage, the Andersons lived in Washington DC.

George Perkins retired from the Navy in October of 1891. In 1896, he was promoted to the rank of Commodore on the retired list of officers.

123 Commonwealth was inherited by Isabel Anderson.

Larz and Isabel Anderson had continued to live in Washington DC and , in 1905, had a new home built there at 2118 Massachusetts Avenue, designed by architects Little and Browne. They also maintained a home, Weld, on Avon Street in Brookline.

Larz Anderson died in April of 1937.  Isabel Anderson continued to live at 123 Commonwealth until about 1943.

On November 9, 1942, 123 Commonwealth was acquired from Isabel Anderson by the Navy League of the United States.

On February 7, 1944, 123 Commonwealth was acquired from the Navy League by Joseph P. Brennan. The transfer was made pursuant to an order by the Superior Court.

The property changed hands and on April 26, 1944, was acquired by Edward H. Whitney of Brighton, who operated it as a lodging house. 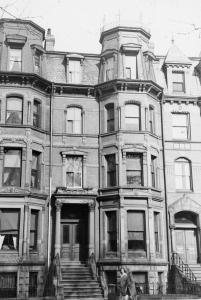 The property subsequently changed and on February 26, 1946, was acquired by Samuel G. Rosenberg. In March of 1947, he filed an affidavit with the Building Department stating that, at the time he purchased the house, it was “listed with the OPA as a rooming house” and “had been run as a rooming house for many years,” and that he intended to continue to operate it as such. In January of 1947, he filed for (and subsequently received) permission to change the legal occupancy from a private dwelling to a lodging house.

The property changed hands, remaining a lodging house through the 1950s.

Among the longterm residents at 123 Commonwealth were Chalmers Murray and his wife, Harriette Rebecca (Evans) Murray, who lived there from about 1944. They previously had at 76 Marlborough.  He was a photographer and concert violinist.  In about 1954, they were joined by Harriette (Evans) Murray’s sister, Lois Bertha (Evans) Slingerland, the former wife of photographer Fay Ernest Slingerland.  In the 1940s, before their divorce, they had lived at 76 Marlborough and then in Washington DC.

Chalmers Murray died in April of 1954 and Harriette Murray moved to Florida to live with their son, Chalmers, Jr.  Lois Slingerland continued as a lodger at 123 Commonwealth until about 1958.  She also maintained a home in Hingham.

123 Commonwealth changed hands and on March 1, 1962, was acquired by Paul Jerome Zirkle, Jr., and his wife, Patricia Marie (Powell) Zirkle. In August of 1962, he filed for (and subsequently received) permission to convert the property from a lodging house into twelve apartments and two lodging units. In his application, he stated that “in essence what I am proposing is to legalize what one or more former owners accomplished without proper authority.”

On September 30, 1964, 123 Commonwealth was acquired from the Zirkles by Daniel H. Ferguson and his wife, Joan M. Ferguson.

123 Commonwealth remained an apartment house in 2016. 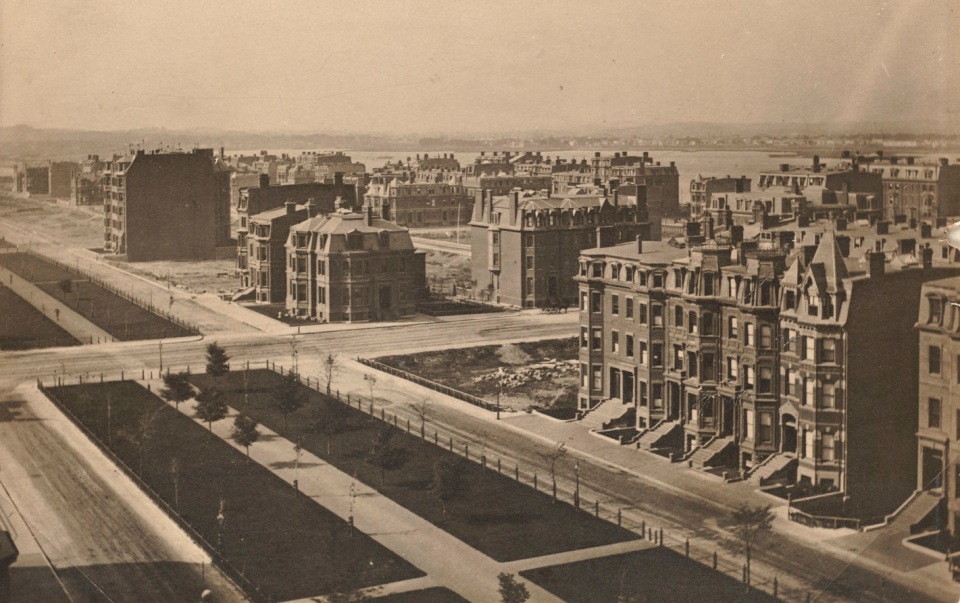