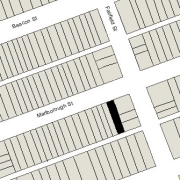 284 Marlborough was designed by Ware and Van Brunt, architects, and built in 1872 for builder and contractor George Martin Gibson, for speculative sale, one of five contiguous houses (284-286-288-290-292 Marlborough) designed as a symmetrical composition: 284 and 292 Marlborough are mirror images of each other, each with a turreted bay; they flank 286-288-290 Marlborough, which have stepped (curvilinear) Dutch-style gables. At the same time, Ware and Van Brunt also designed three additional houses for George Gibson, 282 Marlborough and 7-9 Fairfield.  George Gibson received a permit in early June of 1872 to build all eight houses (reported in the Boston Herald on June 8, 1872).

George Gibson acquired the land for 282-292 Marlborough and 7-9 Fairfield on March 22, 1872, from Edward John Hale, who was associated with John M. Forbes & Co., shipping merchants and investors in railroads, mining, and other enterprises. Edward Hale and his wife, Justine Elise (Sewell) Hale, lived at 3 Brimmer. Edward Hale assembled the parcel through three purchases in October and December of 1870. All of the land was part of one of several parcels originally purchased from the Boston Water Power Company on January 29, 1866, by a real estate investment trust formed by John Templeman Coolidge, Franklin Evans, and Charles Henry Parker. The trust had subdivided the property into lots, which it sold to investors and builders, who then frequently resold the lots to others.

Click here for an index to the deeds for 284 Marlborough, and click here for further information about the land between the south side of Marlborough and Alley 427, from Fairfield to Gloucester.

George Gibson is shown as the owner on the original building permit application for 284-292 Marlborough, dated April 16, 1872, and on the final inspection report, dated October 17, 1872.

On October 1, 1872, 284 Marlborough was purchased from George Gibson by George Walker Weld. It became the home of his brother-in-law and half-sister, George Hamilton Perkins and Anna (Weld) Perkins.

George Perkins was a Commander in the US Navy and was serving as the Lighthouse Inspector for the Second District.  He later would be promoted to Captain and then to Commodore.

George and Anna Perkins continued to live at 284 Marlborough during the 1884-1885 winter season, but moved soon thereafter to 123 Commonwealth.

On July 18, 1885, 284 Marlborough was purchased from Anna Perkins by Maria (Davis) Hastings, the wife of Dr. William Henry Howe Hastings. They previously had lived at 128 Charles.

William H. H. Hastings was a physician and served as Superintendent of the Boston Dispensary.

Davis Hastings died in January of 1891.  Alice Davis married in April of 1896 to George Crompton, a manufacturer of looms. After their marriage, they lived in Worcester.

William H. H. Hastings died in February of 1900.  Maria Hastings and their two unmarried daughters, Susan and Maria, traveled to Europe in late 1900, returning in April of 1902, and then moved to The Marlborough at 416 Marlborough. Maria Hastings continued to own 284 Marlborough and lease it to others.

The house was not listed in the 1902 Blue Book.

By the 1902-1903 winter season, 284 Marlborough was the home of wool merchant Samuel Gibson Adams and his wife, Abbie Louise (Fisher) Clapp Adams.  They previously had lived at 174 Townsend.  Two of Abbie Adams’s sons by her previous marriage, to Erstene Follen Clapp, lived with them: Charles Erstene Clapp, a stockbroker, and Joseph Albert Clapp.

By the 1906-1907 winter season, it was the home of Francis Bacon Sears and his wife Mary Elizabeth (Sparhawk) Sears.   They previously had lived at 104 Marlborough.  He was a banker and also served as treasurer of several cotton mills in Georgia and South Carolina.

They continued to live at 284 Marlborough during the 1909-1910 winter season, joined by their son-in-law and daughter, attorney Henry Endicott, Jr. and Katharine (Sears) Endicott.  By 1911, the Searses and the Endicotts had moved to 250 Commonwealth.

On February 28, 1910, 284 Marlborough was purchased from Maria Hastings by Mabel Howard (Kimball) Hobart, the wife of Edward Hobart. They also maintained a home in East Bridgewater where he was treasurer of the Carver Cotton Gin Company.

Edward Hobart died in December of 1936.  Mabel Hobart continued to live at 284 Marlborough.  In September of 1944, she applied for (and subsequently received) permission to remodel the interior to accommodate a “Shepard Home Lift” operating from the first to the second floor.

She continued to live at 284 Marlborough until about 1947.

On July 14, 1947, 284 Marlborough was acquired from Mabel Hobart by Dr. Eveline B. Lyle, a physician, who made it her home and medical office. She also operated the property as a lodging house. She previously had lived in Brookline. On October 29, 1947, she transferred the property to Sidney A. Hamilton, Preston S. Lincoln, Milton Guberman, and herself as trustees of the 284 Marlborough Street Trust

She continued to live and maintain her office at 284 Marlborough, and to operate it as a lodging house, until about 1951.

On December 17, 1951, 284 Marlborough was acquired from the trust by Ellen Gertrude (Costello) Hogan, the wife of Edward Francis Hogan. They lived in Watertown. 284 Marlborough became the home of her brother, James G. Costello, and his wife, Margaret (McDonald) Costello, who operated it as a lodging house. They previously had lived at 240 Marlborough, also owned by Ellen Hogan, where they also had operated a lodging house.

They continued to live at 284 Marlborough until about 1954, when they moved to 246 Marlborough, which Ellen Hogan had acquired in October of 1953.

On June 29, 1956, 284 Marlborough was purchased from Ellen Hogan by real estate dealer Stuart H. Hastings, and on October 3, 1956, it was acquired from him by Dominic J. Saraceno.  In October of 1956, he filed for (and subsequently received) permission to convert the property from a lodging house into ten apartments.

On January 2, 1963, 284 Marlborough was purchased from Dominic Saraceno by Alvin J. Lipsky, trustee of the Alvin Lipsky Realty Trust.

The property changed hands. It remained an apartment house in 2020.