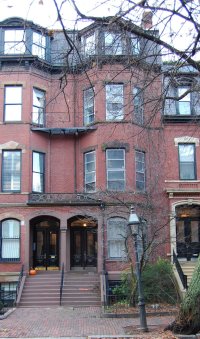 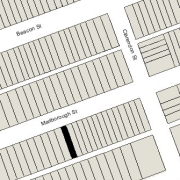 130 Marlborough was built in 1868 by Ivory Harmon, mason and builder, for Charles William Freeland, one of eleven contiguous houses (110-130 Marlborough) built for speculative sale on a parcel with a 198 foot frontage. Charles Freeland was a merchant, cotton manufacturer, and real estate developer. He and his wife, Sarah Ward (Harrington) Freeland, lived at 117 Beacon.

Click here for an index to the deeds for 130 Marlborough, and click here for further information about the land between the south side of Marlborough and Alley 424, from Clarendon to Dartmouth.

On October 7, 1870, 130 Marlborough was purchased from Charles Freeland by Caroline (Metcalf) Plumer, the wife of flour merchant Avery Plumer. They previously had lived at 11 McLean.

Caroline Plumer moved at about the same time and by the 1891-1892 winter season was living in an apartment at 138 Marlborough.

During the 1890-1891 winter season, 130 Marlborough was the home of Dr. Joseph Weatherhead Warren, a physician and instructor at Harvard Medical School.  He previously had lived at 119 Boylston.  In 1891, he moved to Bryn Mawr, Pennsylvania, where he became professor of physiology at Bryn Mawr College. 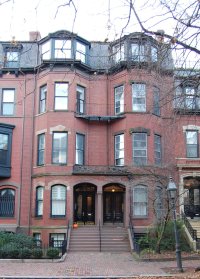 On June 9, 1891, 130 Marlborough was purchased from Caroline Plumer by Dr. Edward Reynolds, a gynecologist, who made it his home and office. He previously had lived and maintained his office at 15 Charles.

Also living at 130 Marlborough during the 1891-1892 winter season was Mrs. Rebecca Coit (Blatchford) Scudder, the widow of Marshall Sears Scudder.  She previously had lived at the Hotel Pelham (southwest corner of Boylston and Tremont).  She continued to live at 130 Marlborough during the 1893-1894 winter season, but moved to an apartment at 362 Commonwealth thereafter.

In April of 1893, Edward Reynolds married Harriet Wolcott Parker. After their marriage, they made 130 Marlborough their home. On April 27, 1893, Dr. Reynolds transferred the property into his wife’s name.

They continued to live there in 1904.  By 1905, they had moved to Readville/Milton and he had purchased 65 Marlborough to be his office.

By 1906, 130 Marlborough was the home of Sara Augusta (called Augusta) (Mitchell) Higbee, the widow of Rev. Charles Higbee. Their two unmarried daughters, Cornelia Post Higbee and Caroline Higbee, lived with her. They previously had lived in an apartment at 384 Commonwealth and, before that, in New Rochelle, New York. They moved to Dover, Massachusetts, in early 1907.

On April 29, 1907, 130 Marlborough was purchased from Harriet Reynolds by real estate dealer and trustee Paul Mascarene Hamlen, as trustee under the will of his father, Nathaniel Perez Hamlen. He and his wife, Agnes Dorothy (Devens) Hamlen, lived at 845 Boylston and by the 1908-1909 winter season had moved to 32 Gloucester,

130 Marlborough became the home of Paul Hamlen’s sisters, Miriam Perkins Hamlen and Elizabeth Perkins Hamlen. They had lived with their widowed father, Nathaniel Perez Hamlen, at 246 Beacon until his death in December of 1904, and then at 49 Chestnut.

During the 1909-1910 winter season, the Misses Hamlen were living elsewhere and 130 Marlborough was the home of Mrs. Julia White (Loomer) Hall, the widow of John Manning Hall, former president of the New York, New Haven, and Hartford Railroad. Their two unmarried children, John Loomer Hall and Florence Marian Hall, lived with her. They had lived at 285 Beacon during the 1907-1908 season, after which John Loomer Hall, a lawyer, moved to 927 Boylston, and Julia and Florence Hall probably moved to New Haven (where Julia Hall’s daughter, Helen, married in November of 1908 to John Ellsworth Owsley).  John Loomer Hall married in January of 1910 to Dorothy Brinley Morgan.  After their marriage, they lived at 130 Marlborough for several months and then moved to 339 Beacon; Julia and Florence Hall probably moved back to New Haven (where Florence Hall married in December of 1912 to William Edwards Day).

By the 1910-1911 winter season, Miriam and Elizabeth Hamlen were living at 130 Marlborough once again.

Miriam Hamlen married in October of 1911 to Edward Ross Warren, president of the Boston Dispensary.  After their marriage, they lived at 130 Marlborough until about 1913.  By 1914, they were living at the Hotel Kempton at 237 Berkeley and Elizabeth P. Hamlen was living at 37 Chestnut.

On September 13, 1913, 130 Marlborough was purchased from Nathaniel Hamlen’s estate by George R. Alley, a brewer. He and his wife, Miriam White (Stedman) Alley, made it their home. They previously had lived in Brookline. His mother-in-law, Susan Livingston (Boyd) Stedman, the widow of Daniel Baxter Stedman, Jr., lived with them.

Susan Stedman continued to live with the Alleys in 1919, but had moved to Seattle by 1920 to live with her son and daughter-in-law, Livingston Boyd Stedman and Ann B. (Leiper) Stedman.  Susan Stedman died in Seattle in July of 1920.

The Alleys continued to live at 130 Marlborough during the 1920-1921 winter season, but moved soon thereafter to Norwood.

By the 1921-1922 winter season, 130 Marlborough was the home of Miss Katherine (Kate) Irving Sanford. She previously had lived at 385 Marlborough.  She also maintained a home in Taunton.

On November 22, 1922, 130 Marlborough was purchased from George Alley by Agnes Hoppin (Grew) Wheeler, the wife of attorney Alexander Wheeler. They lived at 95 Mt. Vernon and also maintained a home in Manchester.

Katherine Sanford continued to live at 130 Marlborough during the 1922-1923 season, but moved thereafter to 387 Marlborough. 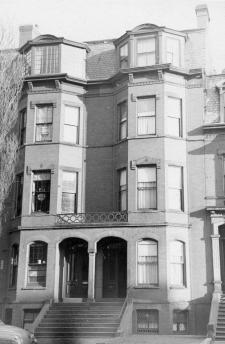 On May 22, 1931, 130 Marlborough was purchased from Agnes Wheeler by Mary Agatha (Day) Greeley Pierce, the former wife of Martin Henry Greeley and the widow of Wallace Lincoln Pierce, who had been president of the S. S. Pierce Company, importers and retail dealers in groceries. John Greeley Pierce, her son by her first marriage, lived with her (he had taken his step-father’s surname). They previously had lived at 90 Fenway.

John Pierce married in April of 1947 to Barbara Graham. After their marriage, they lived with his mother at 130 Marlborough. They all continued to live there until about 1949.

On October 6, 1949, 130 Marlborough was purchased from Mary Pierce by Edward M. Walsh, a heating contractor, and his wife, Octavia Morley (Sawyer) Walsh. They previously had lived at 128 Marlborough.

In June of 1950, he applied for (and subsequently received) permission to convert the property from a single-family dwelling into a lodging house.

On April 26, 1952, Edward Walsh transferred his interest in the property into his wife’s name.

On June 30, 1952, 130 Marlborough was purchased from Octavia Walsh by John Leo MacDonald and his wife, Ina Edith MacDonald, who operated it as a lodging house. They previously had lived at 556 Newbury.

On December 3, 1958, 130 Marlborough was purchased from the MacDonalds by Edith Johnson.

On September 3, 1959, 130 Marlborough was acquired from Edith Johnson by Henry (Hans) Jacob F. Winter, a real estate broker, and his wife, Helen (Eilena) Mercurio (Schiff) Winter, who operated it as a lodging house. They previously had been lodgers at 319 Dartmouth.

On August 7, 1961, 130 Marlborough was acquired from the Winters by real estate dealers Jack Fay (Jacob Fagelman) and his brother, Irving Fay (Israel/Isidore Fagelman). It remained a lodging house.

The property changed hands and on September 4, 1984, was acquired by Rosebud Associates LP (Robert Collier, general partner). In November of 1985, Rosebud Associates applied for (and subsequently received) permission to convert the property from a lodging house into nine apartments. In April of 1986, Robert Collier applied for (and subsequently received) permission to increase the number of units to ten, noting that it was the existing condition.

On June 6, 1991, the Guaranty-First Trust Company foreclosed on its mortgage to Rosebud Associates, took possession of the property, and transferred it to its affiliate, the First Investment Corporation.

On June 28, 1991, the property was acquired from the First Investment Corporation by Keith C. Bouthillier and Gabriel J. Bouthillier.

130 Marlborough remained an apartment house in 2021.