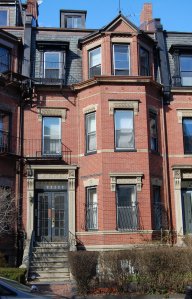 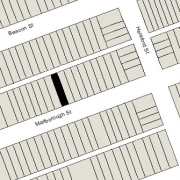 Click here for an index to the deeds for 385 Marlborough, and click here for further information on the land on the north side of Marlborough between Hereford and Massachusetts Avenue.

They all previously had lived at 10 Hawthorne Street.

The same day she purchased the house, Mary Mulliken transferred it to her daughter, Mary Clark. The deed was not recorded, however, until March 28, 1886, after Mary Mulliken’s death.

Sarah Mulliken and Julia Mulliken continued to live at 385 Marlborough during the 1883-1884 winter season, but moved thereafter.

Mary (Payson) Mulliken died in March of 1886. Mary Clark and her children continued to live at 385 Marlborough.

Joseph Payson Clark, a physician, moved to 76 Marlborough in about 1895.

Mary Clark died in January of 1913 and 385 Marlborough was inherited by her four children.

Herbert Clark, a real estate dealer, Frank M. Clark, a bank clerk, and Mary O. Clark continued to live at 385 Marlborough. Frank Clark married in November of 1914 to Bertha Mayer Hamilton and they moved to an apartment at 373 Commonwealth.  In about 1917, Herbert Clark moved to 71 Marlborough to live with his brother, Joseph Payson Clark.  Mary O. Clark went to France in January of 1917 to work in the relief effort during World War I.

The Clark family continued to own 385 Marlborough and lease it to others.

By the 1916-1917 winter season, 385 Marlborough was the home of mining company executive Richard Fay Parker and his wife, Emma Rosalie (Guild) Parker.  They previously had lived at 193 Beacon. They continued to live at 385 Marlborough during the 1917-1918 season, but moved thereafter and by 1920 were living at The Puritan at 390 Commonwealth.

During the 1921-1922 winter season, 385 Marlborough was the home of Cleveland Bigelow, a cotton merchant, and his wife Frances Constance (Folsom) Bigelow.  They previously had lived at 10 Gloucester.  They also maintained a home in Cohasset.

On July 28, 1922, 385 Marlborough was purchased from Joseph, Herbert, Mary, and Frank Clark by Frank Alphonsus McDonald, an undertaker. He and his wife, Nellie A. (Denneny) McDonald, lived at 11 Belvidere.

They continued to live at 385 Marlborough until his death in February of 1939. Clare Supple and their five children (Clare, Edward, David, Philip, and Lawrence) moved soon thereafter to Newton.

On January 24, 1940, the Union Savings Bank foreclosed on the mortgage it held on 385 Marlborough and took possession of the property.

On April 13, 1942, 385 Marlborough was purchased from the bank by Margaret M. (DeBeukelaer) Izzicupo , the wife of Donato Izzicupo, an interior decorator. They previously had lived at 53 East Springfield.

In July of 1942, Margaret Izzicupo filed for (and subsequently received) permission to convert the property from a single-family dwelling into three apartments.  The Izzicupos lived in one of the apartments until his death in May of 1945.

On October 5, 1945, 385 Marlborough was purchased from Margaret Izzicupo by Charles Harvey Edwards, an engineer, and his wife, Hannah (Marx) Edwards. They previously had lived in Michigan. They lived in one of the apartments until about 1949, but moved thereafter.

On July 15, 1949, 385 Marlborough was acquired from the Edwardses by John Watkins Dineen and his wife, Rose C. (Ulrich) Dineen. They previously had lived in New Hampshire. They lived in one of the apartments until about 1953, but moved thereafter.

On August 20, 1953, 385 Marlborough was acquired from the Dineens by Rose Rochelle (Goldberg) Levin Glazer, the former wife of Reuben Levin and of Max L. Glazer, who lived at 273 Beacon.  She was a pianist and entertainer who performed as (and legally changed her name to) Rose Rochelle.  She owned several apartment buildings and lodging houses in the Back Bay and South End. On November 4, 1960, she transferred 385 Marlborough and several other properties to herself as trustee of the Rochelle Realty Trust.

On December 31, 1963, 385 Marlborough was purchased by John Francis Kane, an accountant and real estate developer. He was unmarried and lived in one of the apartments.

John Kane died in May of 1989.  In his will, he left the bulk of his estate to his friend, Jon J. Feeney, whom he also named as his executor.

In August of 2009, Paul Schlegel, successor trustee of The 385 Marlborough Street Nominee Trust, filed for (and subsequently received) permission to convert the property from three apartments to four apartments, indicating that this had been the existing condition “since the 1940s” (based on City Directory entries, it appears that the property had been occupied by four families since the mid-1950s).

The property continued to be assessed as a four- to six-family dwelling in 2021.