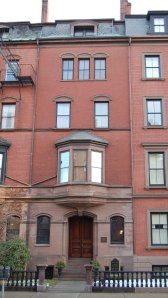 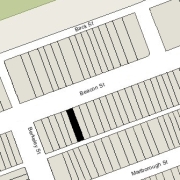 137 Beacon is located on the south side of Beacon, between Arlington and Berkeley, with 135 Beacon to the east and 139 Beacon to the west.

Samuel Russell and Catherine Gibson purchased the land for 135 Beacon and 137 Beacon on September 1, 1859, from William Warren Goddard and T. Bigelow Lawrence. It was part of a larger tract they had purchased from the Commonwealth of Massachusetts on August 1, 1857.

Click here for an index to the deeds for 137 Beacon, and click here for further information about the land on the south side of Beacon from Arlington to Berkeley, north of Alley 421.

On November 11, 1859, the Boston Traveller reported that Samuel Hammond and Catherine Gibson had each filed notices of their intention to build houses on Beacon Street. On May 25, 1860, the Boston Evening Transcript reported that the houses were “nearly roofed in,” and on July 31, 1860, the Transcript commented in more detail that “Mr. E. C. Cabot has two houses under his direction, which will be situated on the south side of Beacon below Arlington street. The dwellings are to be built for S. H. Russell, Esq., and Mrs. C. Gibson, and will be 22 feet by 58 feet in dimensions, and four stories high. The fronts will be of freestone to the second story, with face brick and freestone above.”

On September 3, 1860, Charles Gibson and Samuel Russell joined with land owners and builders of the houses under construction at 131-133 Beacon and 139-147 Beacon in a petition to the Board of Aldermen seeking permission to remove “the very objectionable Poplar trees in front of their premises.”  The petition was granted by the Board.

Charles Gibson married in December of 1871 to Rosamond Warren. After their marriage they lived at 137 Beacon with his mother. They also maintained a home, Forty Steps, in Nahant.

Catherine continued to live at 137 Beacon until her death in March of 1888.

Charles Gibson inherited 137 Beacon and on December 7, 1888, he transferred it into his wife’s name. They continued to live there, redecorating portions of the house, including adding white woodwork in the music room and gold-embossed “Japanese leather” wallpaper in the reception hall.

The Gibsons’ three children — Mary Ethel, Rosamond, and Charles, Jr. — lived with them. 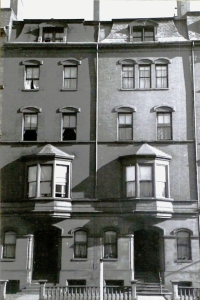 Charles Hammond Gibson, Jr., moved to 59 Beacon in about 1909 and then to an apartment at 48 Beacon in about 1910.  He continued to live there until the 1911-1912 winter season, when he became a lodger at 121 Beacon.  Although he had worked as an investment banker for several years in the early 1900s, he was primarily an author and poet.  In 1899, he published Two Gentlemen of Touraine, a study of French Chateaux, under the pseudonym Richard Sudbury, and in 1907 he published Among French Inns under his own name.  He also published several volumes of poetry.

Mary Ethel Gibson married in July of 1911 to Dr. Freeman Allen, a physician, and they moved to 200 Beacon.

Rosamond Gibson married in October of 1916 to real estate broker and trustee Charles Gibson Winslow.  After their marriage, the Winslows lived temporarily at 137 Beacon with her mother, but had moved to 310 Marlborough by the 1917-1918 winter season.

Rosamond Gibson died in September of 1934. Charles Gibson, Sr., had left 137 Beacon to their two daughters, and on January 28, 1935, the State Street Trust Company transferred it into their names.  On the same day, Mary Ethel Allen and Rosamond Winslow transferred the property to their brother, Charles, Jr.

Charles Hammond Gibson, Jr., continued to live at 137 Beacon (and in Nahant) until his death in November of 1954.  He never married.

He had a deep and wide interest in the Victorian era in which he was raised and preserved the exterior and interior of the house as it had been in Victorian times.  In his will, he specified that the house and contents should be maintained as a museum, and established the Charles Hammond Gibson Memorial Trust to oversee it.  The Gibson House Museum opened to the public in 1957.

May 21, 1999, the Trust entered into a preservation agreement with Massachusetts Historical Commission.

On August 7, 2001, the Gibson house was designated a National Historic Landmark.

On February 8, 2005, the Trust transferred the property to the Gibson Society, Inc., and on October 25, 2006, the Gibson Society entered into an amended preservation agreement with the Massachusetts Historical Commission.