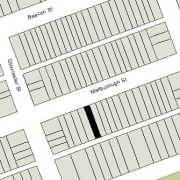 310 Marlborough was designed by architect Frederic H. Moore and built in 1878 by Daniel Weeks Beckler, builder, and Michael Nolan, mason, one of five contiguous houses (302-304-306-308-310 Marlborough) built for speculative sale.

Daniel Beckler is shown as the owner on the original building permit application for all five houses, dated January 2, 1878. It appears that he built the houses under an agreement with the Metropolitan Railroad Company, operators of a horse car system in Boston, which owned the land at the time he filed the permit application. The Company had purchased the land in 1871: two 24 foot wide lots on February 16, 1871, from Franklin Evans, and two 24 foot wide lots on April 5, 1871, from Solomon H. Howe. Daniel Beckler built five houses on the land, each on a 19.2 foot lot. The land originally was part of one of several parcels purchased from the Boston Water Power Company on January 29, 1866, by a real estate investment trust formed by John Templeman Coolidge, Franklin Evans, and Charles Henry Parker.

Click here for an index to the deeds for 310 Marlborough, and click here for further information about the land between the south side of Marlborough and Alley 427, from Fairfield to Gloucester.

After acquiring the land in 1871, the Metropolitan Railroad constructed a stable and horse car building on it, in apparent violation of the deed restrictions which provided that only private stables could be built on the land. In 1874, Charles W. Seabury, owner of the nearest house to the west, at 322 Marlborough, brought suit to require removal of the stables (Seabury v. Metropolitan Railroad Company; 115 Mass. 53). The case was dismissed on demurrer (the court concluded that Charles Seabury had not shown a basis entitling him to enforce the deed restrictions). By the time of the decision, however, the company had already made plans to relocate the stables. At its January 14, 1874, annual meeting, the management reported that “arrangements have been made for the lease for a short term of a tract of land at the junction of Marlborough and Parker streets, to which the car-house and stable on Marlborough will be removed as soon as the spring opens, and the land owned there by the corporation can then be sold” (as reported in the Boston Daily Advertiser on January 15, 1874). By mid-1874, the company had moved the stables and car-house to the leased land (located about where 390–396 Marlborough later would be built). According to an October 31, 1900, Boston Globe article about Timothy C. Taylor, a car starter who had worked with the street railway from 1871, the buildings were “carried bodily on rollers to the corner of Parker and Marlboro sts.”

In 1878, while 302-310 Marlborough were being built, the Metropolitan Railroad Company apparently entered into an agreement to sell the land to Harvey Jewell, one of the company’s directors, and he is shown as the owner (and Daniel Beckler as the former owner) on the final building inspection report dated December 23, 1878. The Metropolitan Railroad Company conveyed the land to Harvey Jewell on April 9, 1879.

Harvey Jewell held the five houses at 302-310 Marlborough as rental property. He was a lawyer and former state legislator, who had served as Speaker of the Massachusetts House of Representatives from 1868 through 1872. He and his wife, Susan A. (Bradley) Jewell, lived at 204 Beacon.

By mid-1880, 310 Marlborough was the home of silverware manufacturer Lewis Edwin Jenks and his wife, Phoebe Ann Pickering (Hoyt) Jenks, an artist.  They previously had lived at the Hotel Union at 303 Shawmut.  By the 1881-1882 winter season, they had moved to 290 Marlborough.

On January 24, 1882, 310 Marlborough was purchased from Harvey Jewell’s estate by banker and stockbroker Lucian (Lucien) Skinner, He and his wife, Celina (Holmes) Skinner, made it their home. They previously had lived at 5 Burroughs Place.

Lucian Skinner died in January of 1884.  Celina Skinner continued to live at 310 Marlborough with their unmarried son, Frederick Skinner (and possibly some of their other children).  Living with them in 1900, and possibly before, was the Skinners’ daughter, Helen Walker, the widow of James R. Walker, a banker, who died in May of 1872.

By the 1905-1906 winter season, 310 Marlborough was the home of attorney Henry Dubois Tudor and his wife, Eleanor (Gray) Tudor.  They had married in June of 1905 and 310 Marlborough probably was their first home together.  Prior to their marriage, he had lived at 208 Beacon with his parents, William and Elizabeth (Whitwell) Tudor.

Henry and Eleanor Tudor continued to live at 310 Marlborough during the 1915-1916 season, but moved thereafter to Cambridge.

The house was not listed in the 1917 Boston Blue Book.

On May 28, 1917, 310 Marlborough was purchased from Frederick Skinner (by then a resident of the Lenox Hotel at 61 Exeter) by Charles Gibson Winslow, a real estate broker and trustee. He and his wife, Rosamond (Gibson) Winslow, made it their home. They had married in October of 1916, after which they had lived at 137 Beacon with her mother, Rosamond (Warren) Gibson, the widow of Charles Hammond Gibson. They also maintained a home in Beverly Farms and then at Smith’s Point in Manchester.

On December 3, 1918, Charles Winslow transferred the property into his wife’s name, and on December 30, 1925, she transferred it into both of their names.

The Winslows continued to live at 310 Marlborough until about 1945, when they moved to an apartment at 276 Marlborough.

On August 30, 1945, 310 Marlborough was purchased from the Winslows by Guglielmo Cini, a jeweler. He and his wife, Bettina Blythe (Brower) Piper Cini, made it their home. They previously had lived in an apartment at 234 Beacon.  They divorced in about 1946 and he remarried soon thereafter to Zelda Gottlieb. By 1948, they were living at 174 Newbury.

On September 16, 1947, 310 Marlborough was acquired by US Army Lt. Colonel Raymond William Spencer and his wife, Gladys (Gilliam) Spencer.  In November of 1947, they filed for (and subsequently received) permission to convert the property from a single-family dwelling into a two-family dwelling.

The Spencers continued to live at 310 Marlborough until about 1960.

On December 14, 1960, 310 Marlborough was purchased from the Spencers by Russell Gordon Jones, an engineer, and his wife, Elizabeth Walker (Jones) Jones. They previously had lived in Reading. On February 2, 1961, they transferred the property into Elizabeth Jones’s name.

In May of 1964, Robert Jones filed for (and subsequently received) permission to convert the property from a two-family dwelling into a three-family dwelling.

By the mid-1960s, the number of units had been increased to four.

On October 6, 1967, Elizabeth Jones transferred the property back into both of their names, and on January 29, 1973, they transferred it back into her name.

In July of 1999, Keith Bouthillier filed for (and subsequently received) permission to convert the property from a three-family dwelling into four units, indicating that was the existing condition and had been for thirty-five years.

On December 29, 2004, they transferred the property to Bouthellier LLC (Keith C. Bouthillier, manager of record).

On January 26, 2016, Scott Kirwan, as successor trustee of the 310 Marlborough Investment Realty Trust, transferred 310 Marlborough to himself and his wife, Di Kirwan. They subsequently converted the property into a single-family dwelling.

310 Marlborough continued to be assessed as a single family dwelling in 2020. 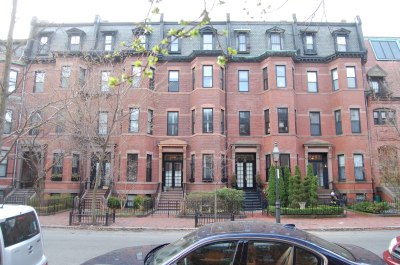