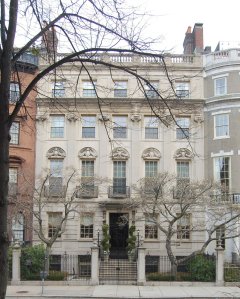 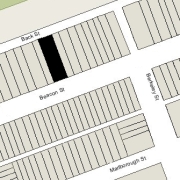 150 Beacon is located on the north side of Beacon, between Berkeley and Clarendon, with 148 Beacon to the east and 154 Beacon to the west.

150 Beacon was designed by architect Alexander Wadsworth Longfellow, Jr. and built in 1904-1905 by Frank L. Whitcomb, builder, as the home of Eben Sumner Draper and his wife, Nannie (Bristow) Draper.  Eben Draper is shown as the owner on the original building permit application, dated October 29, 1904. They previously had lived at 90 Marlborough.

Architectural plans for the house — including elevations, foundation plans, floor plans, and floor framing plans — are included in the City of Boston Blueprints Collection in the Boston Public Library’s Arts Department (reference BIN A-98).

Click here for an index to the deeds for 150 Beacon, and click here for further information on the land on the north side of Beacon, including the Storrow Memorial Embankment on the Esplanade.

Eben Draper was a manufacturer of cotton machinery in the firm founded by his father in Hopedale.  He served as Lieutenant Governor of Massachusetts in 1906-1908, and as Governor in 1909 and 1910. 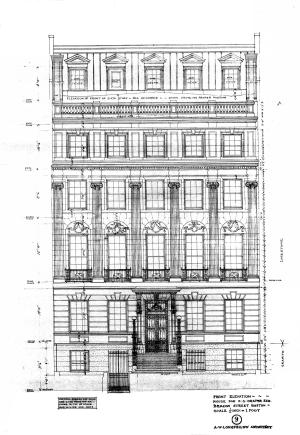 On October 5, 1909, less than five years after it was completed, 150 Beacon suffered a major fire which destroyed the entire interior, leaving only the walls intact.  After inspecting the damage, he commented to the Boston Globe the next day that “there was not a thing left as large as a finger that I could take as a souvenir.”  The house was rebuilt under the direction of the original architect and builder.  While the house was being rebuilt, the Drapers lived at 299 Berkeley with Anne Phillips, the widow of John C. Phillips.

On March 15, 1920, 150 Beacon was purchased from Dorothy Gannett by Flora Anabella (Tufts) Fuller, the widow of Alvan Bond Fuller. She lived in Rye Beach, New Hsmpshire.

Alvan Fuller was an automobile dealer, the first distributor of Packards in New England.  In 1914, he was elected to the Massachusetts House of Representatives, serving from 1916 to 1920.  He subsequently was elected Lt. Governor and, in 1924, he defeated Boston Mayor James Curley for Governor.  He was reelected in 1926.  Prior to their marriage in 1910, Viola Davenport had performed in the “debutante series” of the Boston Opera, making her debut in Lakmé on November 20, 1909. 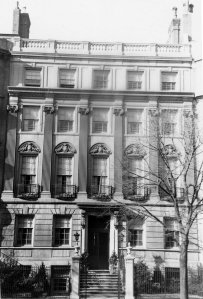 On April 14, 1961, 150 Beacon was acquired from the Rabbs by Emerson College. In July of 1961, it applied for (and subsequently received) permission to convert the property from single-family dwelling into a dormitory and dining quarters.

In 1966, Emerson College acquired 148 Beacon and, in May of 1967, it filed for (and subsequently received) permission to combine 148 Beacon with 150 Beacon, with the use of the combined buildings being as a school.

On September 27, 1999, Emerson College sold 150 Beacon to 150 Beacon Associates LLC (Enrique Darer, manager of record) and sold 148 Beacon to Joseph T. Doyle, Jr., trustee of the 148 Beacon Street Realty Trust. The properties were separated from each other, and in October of 1999. 150 Beacon Associates filed to convert the property into seven apartments, including constructing a 470 square foot addition on the roof. They subsequently withdrew their proposal for the rooftop addition. 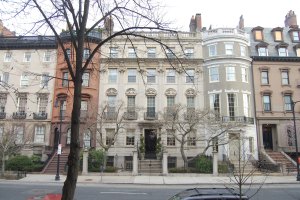 150 Beacon was designed by architect Abel C. Martin and built in 1860 for Barnabas Thayer Loring and his wife, Phebe Farnum (Southwick) Loring. The house was originally numbered 125 Beacon, but re-numbered as 150 Beacon ca. 1862 when homes were built on the south side of the street.

Barnabas Loring purchased the land for 150 Beacon from the Boston and Roxbury Mill Corporation on November 21, 1859.

Click here for an index to the deeds for 150 Beacon (Demolished), and click here for further information on the land on the north side of Beacon, including the Storrow Memorial Embankment on the Esplanade.

On March 31, 1860, Abel C. Martin filed with the Board of Alderman a Notice of Intention to build on Benjamin T. Loring’s land. Construction probably started soon thereafter.

By 1861, Barnabas and Phebe (Southwick) Loring, had made 150 Beacon their home. They previously had lived at 48 Pinckney. He was a boot and shoe manufacturer and wholesale leather merchant.

The Lorings continued to live at 150 Beacon until about 1870, when they moved to Braintree.

On January 30, 1871, 150 Beacon was offered for sale at public auction.  A January 26, 1871, Boston Traveller notice by auctioneer J. K. Porter & Co. described the property: “The house is 21 by 70 feet, is five stories high, with free stone front and octagon bay windows. It contains 18 rooms, has plate glass windows, 3 bath rooms and 5 water closets, with every modern improvement and convenience.  The dining room and drawing room are each 20 by 26 feet, and the library is 20 feet square.”

Either the auction was not held or the property did not sell, and it was offered again by J. K. Porter & Co. on February 2, 1871.  The successful bidder probably was tea merchant Horace Dudley Hall, who purchased the house on February 11, 1871, from Barnabas Loring.  He and his wife, Abbie F. (Allen) Hall, lived in Medford.

On November 10, 1871, 150 Beacon was acquired from Horace Hall by Andrew Robeson, Jr. He and his wife, Mary (Allen) Robeson, made it their home. They previously had lived at 22 Beacon. They also maintained a home in Tiverton, Rhode Island.

Andrew Robeson was a textile mill owner in Fall River, his father having constructed the first calico printing mill in the area. In 1842, he built a granite mansion in Fall River, later the location of the Fall River Historical Society. He was an abolitionist and his home was a station on the underground railway.

The Robesons’ two unmarried children – Andrew Robeson, III, and Mary Allen Robeson – lived with them. Their third daughter, Alice, had married in November of 1870 to Stephen Van Rensselaer Thayer, who had died in October of 1871 while they were living at 6 Commonwealth.

Mary Allen Robeson married in November of 1873 to Charles Sprague Sargent, a horticulturalist and first director of the Arnold Arboretum. After their marriage, they lived in Brookline.

Andrew Robeson died in July of 1874. 150 Commonwealth was inherited by his three children.

Mary (Allen) Robeson continued to live at 150 Beacon with her son, Andrew, a cotton manufacturer. On April 26, 1878, he mortgaged his one-third interest in 150 Beacon to his maternal grandfather, Zachariah Allen of Providence.

Andrew Robeson married in March of 1880 to Abby Frances Knight. After their marriage, they lived in Fall River. His mother moved from 150 Beacon at about that time and by the 1880-1881 winter season was living at 267 Clarendon.

On May 5, 1880, Alice (Robeson) Thayer and Mary (Robeson) Sargent sold their interests in 150 Beacon to John Lowell Gardner, Jr. On the same day, Zachariah Allen foreclosed on his mortgage to Andrew Robeson and sold the property to real estate dealer Henry Winsor, Jr., who then transferred it to John L. Gardner, Jr.

John L. Gardner, Jr., and his wife, Isabella (Stewart) Gardner, lived at 152 Beacon, and soon after acquiring 150 Beacon they combined the two houses, with the address of 152 Beacon.

152 Beacon was built ca. 1860 for New York importer and mine owner, David Stewart, on land which he purchased from the Boston and Roxbury Mill Corporation on November 28, 1859. He built the house as a wedding present to his daughter, Isabella, who married John Lowell Gardner, Jr., in April of 1860. The house was originally numbered 126 Beacon, but re-numbered as 152 Beacon ca. 1862 when homes were built on the south side of the street. The Gardners also maintained homes in Brookline and Beverly.

Click here for an index to the deeds for 152 Beacon (Demolished), and click here for further information on the land on the north side of Beacon, including the Storrow Memorial Embankment on the Esplanade.

Prior to their marriage, John L. Gardner, Jr., had lived at 7 Beacon with his parents, John Lowell Gardner and Catherine Elizabeth (Peabody) Gardner (they later would moved to 182 Beacon). He was associated with his father’s firm, shipping merchants in the East India and Russian trade, and also served as Chairman of the Board of the Chicago, Burlington & Quincy Railroad.

In May of 1880, John L. Gardner, Jr., purchased 150 Beacon. Soon thereafter they combined the two houses, with the address of 152 Beacon, to provide greater space for the display of the growing art collection being assembled by Isabella (Stewart) Gardner. The remodeling was designed by architect John Hubbard Sturgis and completed in 1881.

John L. Gardner, Jr., died in December of 1898, and Isabella Gardner purchased land in the Fenway area and began plans for construction of her Fenway Court museum and residence.  She continued to live at 150-152 Beacon until about 1902, when Fenway Court was completed. 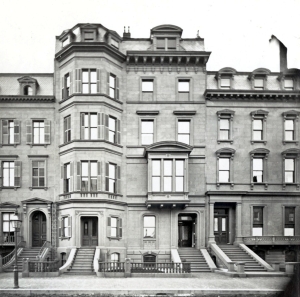 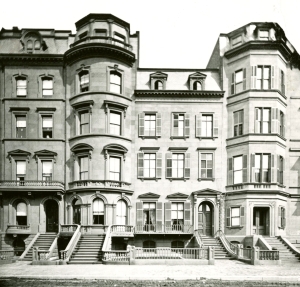