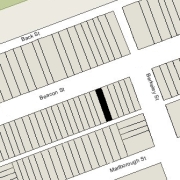 159 Beacon is located on the south side of Beacon, between Berkeley and Clarendon, with 157 Beacon to the east and 161 Beacon to the west.

Click here for an index to the deeds for 159 Beacon, and click here for further information about the land between the south side of Beacon and Alley 420, from Berkeley to Clarendon.

In his Houses of Boston’s Back Bay, Bainbridge Bunting indicates 149-159 Beacon were built by Bourne & Leavitt. Robert Tower Bourn (Bourne) and William Leavitt were house carpenters. They bought the lot at 159 Beacon on July 5, 1860, and sold it with the completed house the next year. It appears likely that they built the house and, as indicated by Bunting, also built the other houses at 149-157 Beacon.

159 Beacon was purchased from Robert Bourn and William Leavitt on August 10, 1861, by Frederick Augustus Whitwell. He and his wife, Mary Crowninshield (Silsbee) Whitwell, made it their home. They had married in June of 1861 and 159 Beacon probably was their first home together. He previously had lived at 79 Beacon with his parents, Samuel and Sophia (Story) Whitwell, and his unmarried siblings: Henry, Sophia Louisa, and Samuel Horatio Whitwell. By 1865, they all had moved to 161 Beacon, next door to Frederick and Mary Whitwell.

Frederick Whitwell was an importer of woolens and later a real estate broker and investor in partnership with his brothers, Henry and S. Horatio Whitwell.

Frederick and Mary Whitwell continued to live at 159 Beacon until about 1868, when they moved to a new house they had built at 239 Beacon.

On May 7, 1868, 159 Beacon was purchased from Frederick Whitwell by Mrs. Mary Ann (Binney) Hayward, the widow of Dr. George Hayward.  Dr. Hayward was a surgeon and, in 1846, had been the first physician to use ether in a surgical operation.  Prior to his death in 1863, they had lived at 16 Pemberton Square.  Before moving to 159 Beacon, she may have lived briefly at 21 Marlborough.

In June of 1871, Emily Silsbee married to dry goods and textile merchant Amory Appleton Lawrence.  After their marriage, they lived in the Longwood district of Brookline and at 77 Beacon, and then at 59 Commonwealth.

During the 1877-1878 winter season, 159 Beacon was the Boston home of Emily (Dunbar) Wooldredge, the wife of John Wooldredge.  In 1877, she and her husband had lived at 224 Beacon.  They maintained their primary residence in Lynn, where he was a shoe manufacturer.  He also was president of the Eastern Railroad and First National Bank of Lynn.

During the 1878-1879 winter season, it was the home of Rev. Leighton Parks, Rector of Emmanuel Church, and his wife, Margarita Alden (Haven) Parks. They had married in August of 1878 and 159 Beacon probably was their first home together. By the next season they had moved to 293 Marlborough.

On April 5, 1883, 159 Beacon was acquired from Mary Hayward by Francis Cabot Lowell. He and his wife, Cornelia Prime (Baylies) Lowell, made it their home. They previously had lived at 80 Marlborough.

Francis Lowell was an attorney.  He served as a member of the Massachusetts House of Representatives from 1895 until 1898, when he was appointed to the US District Court by President William McKinley.

In June of 1901, Vice President Theodore Roosevelt stayed at 159 Beacon while attending the Harvard commencement (Judge Lowell and the Vice President had become friends while at Harvard). Three months later, President McKinley was assassinated and Roosevelt became President.  In 1905, he appointed Francis Lowell a judge of the US Court of Appeals for the First District.

Francis Lowell died in March of 1911, and Cornelia Lowell continued to live at 159 Beacon until her death in January of 1922.

On March 28, 1922, 159 Beacon was purchased from the estate of Cornelia Lowell by Susan Edith (Waterbury) Weld, the widow of Stephen Minot Weld, Jr.  He had served in the Civil War from 1861 to 1865, rising to the rank of Colonel and, upon discharge, was brevetted a brigadier general.  After the war, he became a cotton and wool broker, and served as treasurer of the Elliott Felting Mills.

Susan Edith Weld previously had lived in Dedham, where her husband had died in March of 1920.  She also maintained a home in Wareham, which Stephen Weld  had purchased in the early 1880s.

In about 1947, Susan Weld was joined at 159 Beacon by Mary Frances (Blodgett) Nye, the widow of Theodore Herbert Nye.  She previously had lived in Springfield, where her husband, a wholesale provisions dealer, had died in April of 1924.

On February 28, 1948, 159 Beacon was acquired from Susan Weld by John Francis Nangle and his wife, Jane Frances (Potter) Nangle. They previously had lived in Brookline They continued to live at 159 Beacon until his death in April of 1981. After his death, Jane Nangle probably continued to live there, but at the time of her death in April of 1988, she was a resident of Newburyport.

On February 26, 1990, 159 Beacon was acquired from Jane Nangle’s estate by Dr. Sidney Levitsky, a cardiothoracic surgeon, and his wife, Dr. Lynne (Lipton) Levitsky, a pediatric endocrinologist. They continued to live there until 2004.

The house subsequently changed hands. It remained a single-family dwelling in 2020.