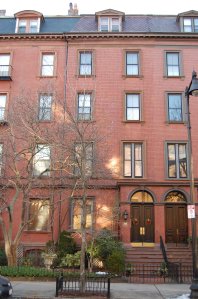 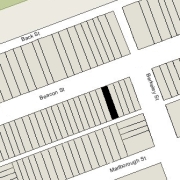 157 Beacon is located on the south side of Beacon, between Berkeley and Clarendon, with 155 Beacon to the east and 159 Beacon to the west.

Click here for an index to the deeds for 157 Beacon, and click here for further information about the land between the south side of Beacon and Alley 420, from Berkeley to Clarendon.

In November of 1861, real estate dealer Francis H. Jackson advertised in the Boston Evening Transcript, offering 157 Beacon “for sale or to let.”

By 1862, 157 Beacon was leased from Henry Lee, Jr., and J. Amory Davis by Thomas Goddard and his wife, Sarah (Farrie) Goddard. They previously had lived at 9 High. Thomas Goddard’s sister, Anna Blake Wilkins (Goddard) Campbell, the widow of restaurateur Abner R. Campbell, lived with them.

Thomas Goddard was a carriage manufacturer, described in his obituary in The Hub as “one of the most noted of New England’s carriage manufacturers,” especially known for his “Goddard Buggy,” which was widely imitated by other carriage makers.  His factory was destroyed in the Great Boston Fire in November of 1872.  He subsequently retired, selling the firm to Joseph F. Pray, who operated a carriage manufactory on the north side of Beacon opposite Parker Street.

Thomas Goddard died in February of 1894 and his sister died in August of 1895.  Sarah Goddard continued to live at 157 Beacon until her death in November of 1906.

The house was not listed in the 1908 Blue Book.

In 1908, it was briefly the home of Charles Winslow’s brother-in-law and sister, John Jameson Cairnes and Amabel (Winslow) Cairnes. They previously had lived at 267 Clarendon. He was a prominent amateur tennis player. They had moved from 157 Beacon by the 1908-1909 winter season. In about 1911, they made Horton Priory in Kent, England, their home.

By the 1908-1909 winter season, 157 Beacon was the home of wool merchant William Farnsworth and his wife, Lucy Holman (Burgess) Farnsworth. They previously had lived in Dedham, where they continued to maintain a home. Their two children, Ellen Holman Farnsworth and Henry Weston Farnsworth, lived with them.

Ellen Farnsworth married in June of 1912 to Alfred Lee Loomis. After their marriage, they lived in Tuxedo Park, New York. Alfred Lee Loomis was an attorney and later would become an investment banker, physicist, and underwriter of scientific research. He established the Loomis Laboratory at Tuxedo Park and is credited with developing several navigational and radar systems.

Henry Weston Farnsworth was killed in France in September of 1915 while serving in the French Foreign Legion.

Lucy Farnsworth died in April of 1929. William Farnsworth continued to live at 157 Beacon until his death in October of 1932. 157 Beacon was inherited by their daughter, Ellen (Farnsworth) Loomis.

On May 18, 1935, 157 Beacon was purchased from Ellen Loomis by attorney Henry Isaac Lazarus and his wife, Leah Emeline (Van Wyke) Wade Lazarus. They previously had lived in an apartment at 33 Commonwealth.

On April 15, 1965, 157 Beacon was purchased from Leah Lazarus by Harvey Brockway Moore, a life insurance agent, and his wife, Elizabeth Jackson (Blakney) Moore, trustees of the Harvey B. Moore Realty Trust. They lived at 31 Lime.

They converted the property into five apartments.

On October 19, 1967, 157 Beacon was acquired from the Moores by Edward P. Jones, a stockbroker. He lived in one of the apartments.

On February 2, 1979, he converted the property into five condominium units, the 157 Beacon Street Condominium.

In May of 1979, Ralph Johnson applied to legalize the occupancy of the building as five units, noting that although it was zoned as a three-family dwelling, it contained five units (with a kitchen and bathroom in each) when he acquired it in 1978. He subsequently abandoned the application, and the occupancy was not legalized as five units until 2002.