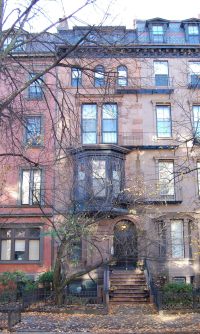 161 Beacon is located on the south side of Beacon, between Berkeley and Clarendon, with 159 Beacon to the east and 163 Beacon to the west.

161 Beacon was designed by architect James Hovey Rand and built in 1863-1864 by Joel T. Watson, mason, as the home of real estate dealer Henry Whitwell. It was one of four houses (161-163-165-167 Beacon) built on land which Henry Whitwell purchased on October 21, 1861, from shipping merchant and US Congressman Samuel Hooper.

Click here for an index to the deeds for 161 Beacon, and click here for further information about the land between the south side of Beacon and Alley 420, from Berkeley to Clarendon.

On August 24, 1863, Henry Whitwell sold the eastern portion of the lot, with a 19 foot six inch frontage, to James Hovey Rand, who designed the house and probably oversaw its construction. On April 26, 1863, prior to James H. Rand’s taking title to the property, Joel T. Watson, a mason, had filed a Notice of Intention to Build on his behalf with the Board of Aldermen.

In May of 1864, James Rand advertised 161 Beacon for sale in the Boston Daily Advertiserand on June 8, 1864, he offered it for sale at public auction through N. A. Thompson & Co., auctioneers.  Henry Whitwell was the successful bidder, taking title to the property on June 15, 1864.

On November 7, 1864, Henry Whitwell transferred 161 Beacon to himself as trustee for the benefit of his mother.

Henry Whitwell subdivided the remainder of his 78 foot parcel into an 18 foot lot at 163 Beacon, a 20 foot lot at 165 Beacon, and a 19 foot lot at 167 Beacon, leaving an additional one foot six inches at the western boundary of his land. In February of 1865, he sold the lot at 167 Beacon to Arthur Devens, and in November of 1865 he sold him the additional one foot six inch strip of land (which Arthur Devens sold that same day to Paul Wallis, who combined it with the land where 169 Beacon was built). In May of 1868, Henry Whitwell sold Anna Flagler, the wife of John Haldane Flagler, the lot at 165 Beacon. He retained the lot at 163 Beacon.

On May 5, 1873, 161 Beacon was purchased from the Whitwell family by Dr John Homans, a physician. He and his wife, Helen Amory (Perkins) Homans, made it their home. They previously had lived at 6 Park Square.

They continued to live at 161 Beacon during the 1889-1890 winter season, but moved thereafter to a new home they had built at 164 Beacon.

On July 23, 1890, 161 Beacon was acquired from John Homans by Jessie (Motley) Guild, the wife of stockbroker Samuel Eliot Guild. They had married in March of 1890 and then traveled in Europe for several months, and 161 Beacon was their first home together. Prior to their marriage, he had lived at 80 Beacon and she had lived at 22 Commonwealth. In 1892, they built a home in Nahant.

By the 1906-1907 winter season, it was the home of Charles Frederic Lyman and his wife, Isabella Ogden Reed (Macomber) Lyman.  They previously had lived in Brookline.

Charles Lyman and John Appleton Burnham, III, were partners in the firm of Lyman & Burnham, which manufactured automobiles ca. 1904-1905 and later dealt in automobile accessories.  By 1910, Charles Lyman had became a stockbroker.

John Bapst Blake was a surgeon; he served as surgeon-in-chief at Boston City Hospital and was a professor of surgery at Harvard Medical School.

Anne Blake died in September of 1910.  John Blake remarried in June of 1913 to Margaret Barney, and they continued to live at 161 Beacon until about 1921, when they moved to an apartment in The Chesterfield at 371 Commonwealth.

On May 15, 1923, 161 Beacon was acquired from William Stober by Frederika Elizabeth (Hammond) Clough, the wife of banker Frank Roland Clough.

In June of 1923, F. Roland Clough applied for (and subsequently received) permission to remodel the interior and add a fire escape at the rear of the house.  The occupancy was stated to be “dwelling,” but it appears that the remodeling was designed to create several apartments or rooms for lodgers. By the mid-1920s, there were several families listed in the Blue Books at 161 Beacon along with the Cloughs.

F. Roland Clough died in September of 1927, and Frederika Clough continued to live at 161 Beacon.  Their daughter, Beatrice Frederika Clough, lived with her until the early 1930s, when she went to England to study at Oxford.  In 1932, she married John Rankin Rathbone.  He was elected to Parliament in 1935 and was killed in 1940 in the Battle of Britain.  She was subsequently elected to fill his seat and continued to serve until 1945, when she retired.

By 1930,161 Beacon had been converted into five or more apartments. Frederika Clough continued to live in one of them until about 1938. Thereafter, she probably moved to London. She continued to own 161 Beacon.

On November 8, 1945, the Suffolk Savings Bank for Seamen and Others foreclosed on its mortgage to Frederika Clough and sold 161 Beacon to Herbert Appleton Stanwood, an automobile salesman, and his wife, Emily S. (Levis) Stanwood.  The Stanwoods had lived in one of the apartments at 161 Beacon since about 1942; prior to that, they had lived at 170 Walworth.

Herbert Stanwood died in September of 1951. Emily Stanwood continued to live at 161 Beacon until about 1957.

The property subsequently changed hands and on January 28, 1965, was acquired by Richard E. Kent, trustee of the Bay Real Estate Trust. In July of 1965, he filed for (and subsequently received) permission to legalize the occupancy as a twelve unit apartment building. In his filing, he indicated that this was an existing condition.

On February 15, 1966, 161 Beacon was acquired from Richard Kent by Edward E. Plaisted and Janice A. Ring, trustees of the PNB Realty Trust.

On February 2, 1970, real estate broker and investor Patrick J. Glynn and his wife, Anne T. Glynn, as the owners of a majority of the shares of the PNB Realty Trust, appointed themselves as its trustees. The trust terminated on January 7, 1986, and on December 8, 1986, Patrick and Anne Glynn transferred the property into Patrick Glynn’s name. On January 8, 1987, he transferred the property to himself and his wife.

161 Beacon remained an apartment building in 2020.