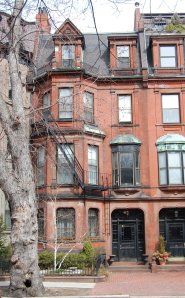 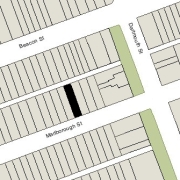 Click here for an index to the deeds for 173 Marlborough, and click here for further information about the land between the north side of Marlborough and Alley 418, from Dartmouth to Exeter.

On October 28, 1882, 173 Marlborough was purchased from George B. Upton by shipping merchant George Shattuck Cushing, as trustee for the benefit of his wife, Mary Ellen (Baldwin) Cushing, and their children, Ellen Watson Cushing and George Marston Cushing. They made 173 Marlborough their Boston home. They also maintained a home in Milton.

The Cushings continued to live at 173 Marlborough during the 1887-1888 winter season, but moved thereafter to their home in Milton. By the 1891-1892 season, they were living in an apartment at 409 Marlborough.

On July 31, 1888, 173 Marlborough was purchased from George S. Cushing by Helen G. (Smith) Coburn, the wife of George W. Coburn. They previously had lived at 38 Chester Square. They also maintained a home in Andover.

George Coburn was a wool merchant in the firm of Hallowell & Coburn, formed in 1865 with Richard P. Hallowell. 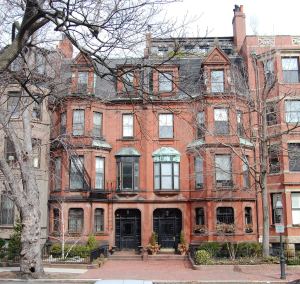 George Coburn died in April of 1890.  Helen Coburn continued to live at 173 Marlborough until her death in December of 1906.

William Donald was a wool merchant and had been associated with George Coburn’s firm, Hallowell & Coburn, from 1865, when it was formed. After George Coburn’s death, he joined with Richard Hallowell to form the successor company, Hallowell, Donald & Company. William and Cornelia Donald’s daughter, Jessie C. Donald, married in June of 1896 to Frank W. Hallowell, the son of Richard P Hallowell.

The Donalds continued to live at 173 Marlborough during the 1912-1913 winter season, but moved thereafter to Chestnut Hill. They also maintained a home in South Yarmouth.

On October 18, 1915, 173 Marlborough was purchased from William Donald’s estate and heirs by Charles Fessenden Morse. He and his wife, Ellen Mary (Holdredge) Morse, made it their home. They previously had lived at 311 Marlborough. They also maintained a home in Falmouth.

Charles Morse had retired in 1913 as general manager of the Kansas City Stockyard Company.

On September 27, 1940, 173 Marlborough was purchased from the Morse family by Florence J. (Smith) Doerfler Joyce, the wife of Myles J. Joyce, a shipper with the Allston Storage Warehouse. They previously had lived (and operated a lodging house) at 397 Marlborough.

In November of 1940, Florence Joyce applied for (and subsequently received) permission to convert the property from a single-family dwelling into a lodging house. They continued to live at 173 Marlborough until about 1945.

On June 16, 1945, 173 Marlborough was purchased from Florence Joyce by Edward Beaudry and his wife, Noelia (Laurendeau) Beaudry, who operated it as a lodging house. They previously had lived at 10 Isabella.

The property changed hands and on September 26, 1947, 173 Marlborough was acquired by Katherine T. Gillis, who operated it as a lodging house.

On July 28, 1952, the Second Federal Savings and Loan Association of Boston foreclosed on its mortgage to Katherine Gillis and sold 173 Marlborough to Beatrice Mary (Gaffney) Carney, the widow of Bernard J. Carney, who continued to operate it as a lodging house. She lived in Dorchester, where she also operated a lodging house.

Katherine Gillis continued to live at 13 Marlborough until the mid-1950s.

On March 19, 1972, the house was significantly damaged by a fire in which two residents died, and a third and two firefighters were injured. The March 20, 1972, Boston Globe article on the fire indicated that it was of “suspicious origin.”

In August of 1973, Neal Gold of Watertown filed for (and subsequently received) permission to repair the fire damage and continue the property’s use as a lodging house. On November 14, 1973, the property was purchased from the Carney Realty Trust by Neal Gold’s father, Benjamin Gold, as trustee of the Gold Realty Trust, who transferred the property to Neal Gold on the same day.

On October 12, 1976, Neal Gold transferred the property to himself as trustee of the 173 Marlborough Trust. 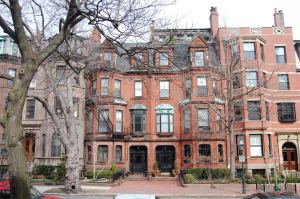