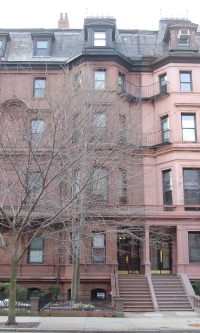 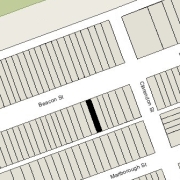 217 Beacon is located on the south side of Beacon, between Clarendon and Dartmouth, with 215 Beacon to the east and 219 Beacon to the west.

In his Houses of Boston’s Back Bay, Bainbridge Bunting does not attribute 211-219 Beacon to a specific architect.  However, an August 19, 1865, Boston Daily Advertiser article identifies the architects as Ware and Van Brunt:

“A block of five brown-stone fronts is to be started immediately upon the land…which has been purchased by C. W. Freeland, esq.  These houses are to be built from plans drawn by Messrs. Ware and Van Brunt and are to be constructed of first-class materials.  Mr. Hammond, who has been superintending the building of Mr. Beebe’s elegant house on the old Hancock estate, is to be the builder of this block.”  James Beebe’s house was located at 30 Beacon; the builder probably was John Hammond, a carpenter and housewright.

All of the land on the south side of Beacon between Clarendon and Dartmouth was sold by the Commonwealth of Massachusetts at its public auction on January 3, 1863.  The successful bidders for the land where 211-219 Beacon would be built were Franklin Evans (Lots 4 and 5) and Sidney Homer (Lots 6 and 7), four 25 foot wide lots. Charles Freeland subsequently acquired their rights to purchase the land and subdivided it into five 20 foot wide lots for 211-219 Beacon. He took title to the land from the Commonwealth on April 17, 1866, probably after the houses were completed.

Click here for an index to the deeds for 217 Beacon, and click here for further information about the land between the south side of Beacon and Alley 419, from Clarendon to Dartmouth. 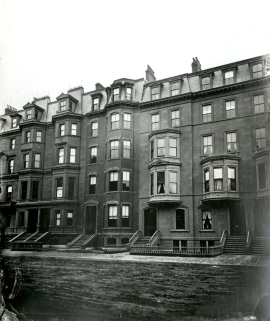 On May 6, 1870, 217 Beacon was purchased from Charles Freeland by wool merchant William Hilton. He and his wife, Esther Althine (Ward) Hilton, made it their home. They previously had lived at 89 Pinckney.

They continued to live at 217 Beacon during the 1882-1883 winter season, but moved thereafter to 17 Commonwealth.

In November of 1883, William Hilton offered 217 Beacon for sale through real estate dealers John Jeffries & Sons. In its Boston Daily Advertiser and Boston Journal advertisements, the firm noted that it was “built in the most thorough manner, under the supervision of Mr. Harmon” and “will be sold for one-half the original cost. A great bargain.” Mr. Harmon probably was Ivory Harmon, a mason whose firm, I. & H. M. Harmon, built a number of homes in the Back Bay. As noted above, in 1865, when 211-219 Beacon were about to begin construction, the Boston Daily Advertiser reported that “Mr. Hammond … is to be the builder of this block.” John Hammond was a carpenter and Ivory Harmon was a mason, and they probably built the house together; however, it is possible that either the 1865 article or the 1883 advertisement had the wrong name.

On November 27, 1883, 217 Beacon was purchased from William Hilton by Agnes Maria (Claflin) Davis, the wife of Charles Davis, Jr. They previously had lived at 118 Charles. Charles Davis was treasurer of the Atlantic Dyewood Company.

By the 1888-1889 winter season, it was the home of William Croad Lovering, a cotton manufacturer in Taunton.  He was a widower.  He previously had lived at 46 Newbury.

William Lovering was elected to Congress in 1896.  He continued to maintain his Boston residence at 217 Beacon during the 1896-1897 winter season, after which he moved to 357 Beacon.

In 1902, 217 Beacon was the home of Col. Henry Sturgis Russell and his wife, Mary Hathaway (Forbes) Russell.  They previously had lived at 281 Beacon.  They also maintained a residence, Home Farm, in Milton.  Col. Russell was Boston Fire Commissioner; he formerly had been a shipping merchant in the East India and China trade in his father-in-law’s firm, John Murray Forbes & Co., and had served as president of the Continental Telephone Company.  By 1903, they had moved to an apartment at 191 Commonwealth, where he died in February of 1905.

During the 1902-1903 winter season, 217 Beacon was the home of Charles Albert Read, Jr., and his wife, Ellen Arvilla (Hatfield) Read.  They had lived at 431 Marlborough during the 1901-1902 season.  Living with them at 217 Beacon was Ellen Read’s niece, Adelena Hatfield.  Their principal residence was in Manchester.

By the 1903-1904 winter season, 217 Beacon was the home of Olivia A. (Dodd) Bigelow, the widow of jeweler and bank president Abraham Orlando Bigelow, and their daughter, Helen Olivia Bigelow.  They previously had lived in Jamaica Plan, and before that at 325 Beacon. They continued to live at 217 Beacon until Olivia Bigelow’s death in December of 1905.

In 1907, 217 Beacon was the home of attorney Charles Benjamin Barnes, Jr., and his wife, Josephine Lea (Low) Barnes.  They previously had lived at 3 Exeter.  They also maintained a home in Hingham.  By 1908, they had moved to 15 Marlborough.

By the 1907-1908 winter season, 217 Beacon was the home of  Dr. Lincoln Davis, a physician and surgeon, and his wife Katharine Bradlee (Crowninshield) Davis.  They previously had lived at 315 Marlborough.

By the 1922-1923 winter season, 217 Beacon was the home of Ellery Sedgwick James and his wife, Louise Russell (Hoadley) James.  They also maintained a home in East Hampton, New York.

Ellery James was the Boston resident partner for the private banking firm of Brown Brothers & Company. 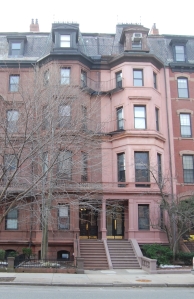 They continued to live at 217 Beacon in 1926, but moved soon thereafter to New York City.

By the 1926-1927 winter season, 217 Beacon was the home of former US diplomat Francis Munroe Endicott and his sister, Mrs. Florence Elizabeth (Endicott) Davis Haven.  She was the widow of Chester Hasbrouck Davis, a wholesale boot dealer, and of Franklin Haven, Jr., a banker. Francis Endicott and Florence Haven previously had lived at 35 Beacon; they also maintained a residence in Beverly Farms.

Florence Haven died in November of 1933.  Francis Endicott continued to live there until his death in July of 1935.

On September 16, 1937, 217 Beacon was acquired from Aaron Davis and Charles Claflin Davis, the children of Charles and Agnes (Claflin) Davis, by Dorothy A. Palmer of Waterville, Maine. Later that month, she also acquired 219 Beacon.

On August 30, 1939, 217 Beacon and 219 Beacon were acquired from Dorothy Palmer by Adelard Monet, a former dealer in furniture and household goods He lived at 377 Beacon, where he operated a lodging house.

By 1943, 217 Beacon was the home of John Dever, a painter and decorator, who operated it as a lodging house.

Also in April of 1944, Adelard Monet filed for (and subsequently received) approval to change the occupancy of 217 Beacon from a single-family dwelling to a lodging house, legalizing the existing use.

On June 6, 1947, 217 Beacon was purchased from Adelard Monet by Charles Green, a retired millwright at the Baker Chocolate factory, and his wife, Jennie (Russell) Green, who continued to operated it as a lodging house. They previously had lived at 40 Chelmsford.

On June 25, 1963, John Erlemann transferred his interest in 217 Beacon to Karoline Erlemann. They separated at about that time and by 1966 he was living at 15 Gloucester.

Karoline Erlemann continued to live (and operate a lodging house) at 217 Beacon until about 1972.

In November of 1994, Patrick Glynn applied for permission to convert the property into 17 apartments. His application was denied and his appeal was dismissed by the Board of Appeal.

The property remained a lodging house in 2016. 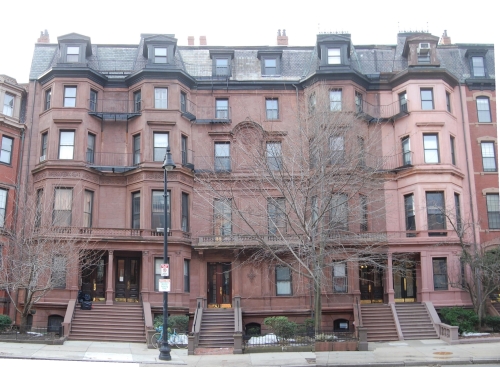