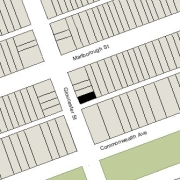 15 Gloucester was designed by architect Willard Thomas Sears (of the firm of Cummings and Sears) and built for him in 1872-1873 by Charles J. Fox, mason, one of four contiguous houses (9-11-13-15 Gloucester) designed as two symmetrical pairs united by an uninterrupted mansard roof.  At the same time, he also designed and had built 322 Marlborough on the adjoining lot to the east.  The building permit for the five houses was issued to Cummings and Sears during the week ending May 3, 1872 (reported in the Boston Journal on May 4, 1872).

Click here for an index to the deeds for 15 Gloucester, and click here for further information about the land between the south side of Marlborough and Alley 427, from Fairfield to Gloucester.

Willard Sears sold he lot at 322 Marlborough to his brother-in-law and sister, Charles W. Seabury and Elizabeth Willard (Sears) Seabury, in July of 1872, before the house was completed, and kept 9-11-13 Gloucester as rental property.

Willard Sears and his wife, May (Motte) Sears, made 15 Gloucester their home. They previously had lived at the Hotel Boylston (Boylston at Tremont), and before that at 395 Beacon with May Sears’s parents, Rev. Mellish Irving Motte and Marianne (Alger) Motte.

In 1878, Mellish and Marianne Motte lived at 15 Gloucester with the Searses.  They were no longer living there in 1880, and probably had moved to Washington DC, where Rev. Motte died in December of 1881.

On December 22, 1886, Willard Sears transferred 15 Gloucester to his wife. He retained in his name the 3 foot 6 inch wide lot at the rear of the property reserved for passage and drainage to the alley for the benefit of 9-11-13 Gloucester.

Willard and May Sears continued to live at 15 Gloucester during the 1908-1909 winter season, after which they moved to 755 Boylston.

On March 19, 1909, 15 Gloucester was purchased from May Sears by Frances Clifford (Brown) Prescott, the widow of Linzee Prescott. She purchased the 3 foot 6 inch strip at the rear of the property from Willard Sears on the same day. She previously had lived at 413 Beacon.

Her daughter, Edith Prescott, lived with her until November of 1917, when she went to France to work in a YMCA canteen on the front lines (in December of 1918 she married in Paris to Major Theodore Colcord Baker).

During the 1917-1918 winter season, Mrs. Prescott was joined at 15 Gloucester by William Bacon Emmons and his wife, Margaret (Young) Emmons.  Earlier in 1917, they had lived at 285 Beacon with Margaret Emmons’s mother, Charlotte Wright (Hubbard) Young, the widow of Benjamin Loring Young.  William Emmons owned Cloudland Farms in Pomfret, Vermont, a 2,000 acre farm where he raised Jersey cattle, Southdown sheep, and Berkshire pigs, and produced maple syrup.  They moved from 15 Gloucester by the 1918-1919 season, and by the 1919-1920 season were living at 3 Fairfield.

Frances Prescott also had moved by the 1918-1919 season, and was living at the Lenox Hotel at 61 Exeter.

During the 1918-1919 winter season, 15 Gloucester was the home of attorney Frederic Sprague Goodwin and his wife, Juliet Borland (Higginson) Goodwin.  They had lived at 135 Beacon during the 1916-1917 winter season.  They also maintained a home in Dover, Massachusetts.  They had moved from 15 Gloucester by the 1919-1920 season, and probably made Dover their year-round home for several years.  By the 1923-1924 winter season, they were living at 390 Beacon.

On September 13, 1919, 15 Gloucester was purchased from Frances Prescott by Serita (Lincoln) Bartlett, the wife of banker and stockbroker Matthew Bartlett. They previously had lived at 230 Marlborough.  They also maintained a home in Beverly Farms.  As a child, Serita Bartlett had lived next door, at 13 Gloucester, with her parents, Arthur and Serafina (Loring) Lincoln.

The Bartletts continued to live at 15 Gloucester until about 1939.  In 1940, they were living in Manchester.

On December 13, 1939, 15 Gloucester was acquired from Ray C. Johnson by Harold Dewey Murray, a chauffeur, and his wife, Emma (Fitton) Murray, who operated it as a lodging house. They lived at 69 Weston in Roxbury. They also owned 358 Marlborough, which they had purchased in March of 1939, and also operated as a lodging house. In the 1941 City Directory, Emma Murray was listed at 15 Gloucester and Harold Murray was listed at 358 Marlborough. By 1942, they no longer owned either house and were once again living at 69 Weston in Roxbury,

The property changed hands and on June 29, 1942, was acquired by William Karmazine, trustee of the Esdith Realty Trust.

In October of 1942, William Karmazine filed for (and subsequently received) permission to convert 15 Gloucester from a single-family dwelling into a “home and guest house.”

On March 20, 1960, he transferred 15 Gloucester and 213 Beacon to his parents, Earl W. Carr and Emma Augustus Stevens (Brennan) Carr. They lived at 238 Marlborough.

On July 1, 1963, Earl and Emma Carr transferred the property to their other son, John W. Carr, also a realtor. He lived at 15 Gloucester and operated it as a lodging house. He previously had lived with his parents at 238 Marlborough.

The property changed hands and on February 11, 1971, was acquired by Julius R. Cavadi. On the same day, he transferred the property to himself and his wife, Jacquelyn M. Cavadi, as trustees of the Camalyn Realty Trust.

On July 28, 1975, Julius R. Cavadi foreclosed on a mortgage given to Joseph A. Johnson and Walter C. Dunlop and took possession of 15 Gloucester. In April of 1976, he acquired 13 Gloucester.

On June 15, 1976, 13 Gloucester and 15 Gloucester were purchased from Julius Cavadi by Michael Geller, Keevin Geller, and John B. Wise, co-partners doing business as 13-15 Gloucester Street Associates.

That same month, they applied for (and subsequently received) permission to remodel 15 Gloucester from a “home and guest house” into four apartments.

On September 21, 1976, they converted both properties into condominium units, with four units in each house, the 13-15 Gloucester Street Condominium.