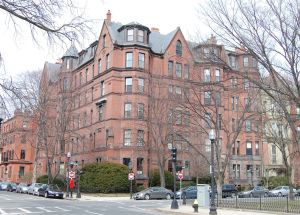 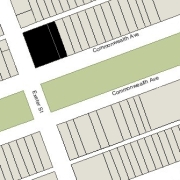 191 Commonwealth was designed as six floor-through apartments, called a “family hotel” or “French flats,” following the style introduced to Boston (and America) in 1857 at the Hotel Pelham (southeast corner of Boylston and Tremont) and pioneered in the Back Bay by the Hotel Hamilton at 260 Clarendon, and the Hotel Kempton at 237 Berkeley, both built in 1869.

191 Commonwealth was built for Alexander Agassiz, his brother-in-law, Henry Lee Higginson, and Henry Lee Higginson’s father, George Higginson . “Alexander Agassiz and others” are shown as the owners on the original building permit application, dated August 7, 1872, and on the final building inspection, dated December 29, 1873.   It was named the Hotel Agassiz in honor of the Agassiz family.

An August 17, 1872, Boston Globe article announced the plans for the building:

“A New Family Hotel.  It is proposed by Alexander Agassiz and others to begin building at once a family hotel on Commonwealth avenue, corner of Exeter street.  The plans have already been decided upon, Weston & Rand being the architects.  The building will be constructed of brick and stone, with freestone dressings, and the lot upon which it will be built measures 84 x 124½ feet. The structure will be 70 feet front, 104½ feet deep, and 82 feet high, and the number of stories will be six.  The walls will be sixteen inches thick to the second floor, and 12 inches thick above.  The roof will be covered with slate and gravel composition. Two elevators, propelled by hydraulic motors, will be located in the building, and the rooms will be heated by Cloggston’s heating apparatus and the usual fireplaces.  The main staircase will be of iron, enclosed by brick walls, with iron-faced doors at each landing.  The ventilation of the building will be perfect. The hotel is intended for six families, and one suite of rooms will be built on each of the six floors.  When completed, the building will have cost $175,000 or $200,000.”

The permit application and final inspection report indicate the architects as Weston & Rand, a partnership of Frank William Weston and George Dutton Rand. Correspondence between Weston & Rand and Henry Lee Higginson (in the Henry Lee Higginson Collection at Harvard’s Baker Library and quoted by Margo Miller in her Château Higginson: Social Life in Boston’s Back Bay 1870-1920) indicates that Francis Henry Jackson, an architect and real estate dealer, worked with Weston & Rand on the project. He died in July of 1873 and, according to the correspondence, his responsibilities “both in superintending the work and in the office devolved upon” Weston & Rand.

The permit application and final inspection report indicate the builder as Weston & Shepard (spelled Sheppard on both), a partnership of Seth Weston (no relation to the architect, Frank Weston) and George Frederick Shepard. Weston & Shepard were masons, and correspondence and invoices cited by Margo Miller indicate that the carpentry work was done by Morton & Chesley, a partnership of Francis F. Morton and William P. Chesley.

The original building was built on a lot with an 84 foot frontage on Commonwealth purchased on March 17, 1873, from the Commonwealth of Massachusetts by George Higginson, Henry Lee Higginson, and Alexander Agassiz. The land had been sold by the Commonwealth at its March 2, 1872,  auction of Back Bay lands, and the Higginsons and Alexander Agassiz had acquired the rights to purchase the property from the successful bidders.  Work on the new building began a number of months before the title was transferred in March of 1873.

Click here for an index to the deeds for 191 Commonwealth, and click here for further information about the land between the north side of Commonwealth and Alley 425, from Dartmouth to Exeter.

Alexander Emmanuel Rodolphe Agassiz was a zoologist and oceanographer, and also was the developer and president of the Calumet and Hecla Copper Mines. His father, Jean Louis Rodolphe Agassiz, was the a noted Harvard naturalist. Alexander Agassiz lived in Cambridge; his wife, Anna (Russell) Agassiz died in December of 1873.

George Higginson was a founding partner in the investment banking firm of Lee, Higginson & Co., which specialized in railroad and mining stocks and was closely associated with the Calumet and Hecla company. He lived at 39 Brimmer; his wife, Mary Cabot (Lee) Higginson, died in August of 1849.

George and Mary Higginson’s son, Henry Lee Higginson (called “The Major” because of his military service during the Civil War) was a partner in Lee, Higginson & Co., and the husband of Alexander Agassiz’s sister, Ida Olympe Frederika Agassiz.  Henry Lee Higginson may be best known for founding the Boston Symphony Orchestra in 1881 and for sustaining it for many years thereafter.  Henry and Ida (Agassiz) Higginson lived at the Hotel Hamilton at 260 Clarendon, but moved to the Hotel Agassiz when it was completed and continued to live there for the rest of their lives. They also maintained a home, Sunset Hill, in West Manchester. He died in November of 1919 and she in May of 1935.

On March 12, 1878, George Higginson purchased from the Commonwealth the 25 foot wide lot at 185 Commonwealth, to the east of the Hotel Agassiz, for construction of an annex to the main building. On March 27, 1878, he entered into a party wall agreement with Frank Merriam, owner of the land at 183 Commonwealth.

Construction of 185 Commonwealth did not begin until about 1882. On March 26, 1882, a Boston Herald article on “building improvements on the Back Bay” noted that “Mr. Charles Fairchild of the firm of Lee, Higginson & Co., is building an addition, 25×80 feet, to the large apartment house on the corner of Commonwealth avenue and Exeter street, at a cost of about $50,000.” The original permit application for the building has not been located, but the detail provided in the article probably was taken from that document. Charles Fairchild and his wife, Elizabeth (Lily) Fairchild lived in an apartment at the Hotel Agassiz and may have intended the new structure as their home, or he may have filed the permit application on behalf of the Higginson family. On September 24, 1882, the Boston Globe reported that “the addition to the Hotel Agassiz is about finished.”

When completed, the annex took the form of a single townhouse entered through the main building. Although possibly originally intended as the home of Charles and Lily Fairchild, it became the home of Henry and Ida Higginson.

On January 15, 1887, George Higginson transferred a one-third interest in the annex property, each, to Henry Lee Higginson and Alexander Agassiz, noting in the deed “the whole of the estate known as 191 Commonwealth Avenue” was owned by the three of them in equal shares, “but for convenience the easterly portion…has heretofore stood in the name of George Higginson alone and it is now desired to make record title correspond with the actual fact.” 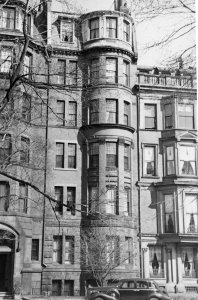 Alexander Agassiz died in March of 1910, and on February 1, 1912, his executors transferred his one-third interest in the Hotel Agassiz to his three sons: George Russell Agassiz, Maximilian Agassiz, and Rodolphe Louis Agassiz.

The property continued to be owned by Higginson and Agassiz family members until 1951.

On April 26, 1951, 191 Commonwealth was purchased from the Higginson and Agassiz families by Miss Clara Rita Drucker. She was a law office secretary and probably held the property for someone else. In about 1964, she married to Harry Keimach.

On August 26, 1964, 191 Commonwealth was purchased from Clara Keimach by Beatrice M. Coulter, and on April 30, 1965, it was acquired from her by Nicholas D. Rizzo, trustee of the Munick Realty Trust.

The Boston Globe reported the sale on Mary 9, 1965. It commented: “Over the past 91 years, the original six apartments, with about 18 to 20 rooms each, have been modified and today there are 16 apartments with about 6 to 10 rooms each. The original 21 water closets have been replaced by modern bathrooms, and the fireplaces are no longer required to provide heat. Designed to provide luxury living, the former Hotel Agassiz, with its 11-foot ceilings, still provides the finest in gracious intown living, and is another example of the fine ‘Old Boston’ just a few blocks away from Boston’s newest and tallest structure, the Prudential Tower.”

On May 18, 1973, Nicholas Rizzo converted the property into 16 condominium units, the 191 Commonwealth Avenue Condominium.