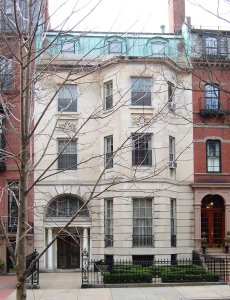 10 Marlborough was designed by Little and Browne, architects, and built in 1905-1906 by Mitchell & Sutherland, builders, as the home of banker Arthur Perry and his wife, Emma Amelia (Foster) Perry.  He is shown as the owner on the original building permit application, dated December 15, 1905. They lived at The Tuileries at 270 Commonwealth during the 1905-1906 winter season and, before that, had lived in Brookline. They also maintained a home in Nahant.

Architectural plans of the building — including elevations, floor plans, and foundation plans — are included in the City of Boston Blueprints Collection in the Boston City Archives (reference BIN A-3).  These and additional drawings also are included in the Arthur Little and Herbert W. C. Browne Architectural Collection at Historic New England. The plans are signed “C. C. H” (Charles H. Hodgkins, who was a draftsman with Little and Browne).

Click here for an index to the deeds for 10 Marlborough, and click here for further information about the land between the south side of Marlborough and Alley 422, from Arlington to Berkeley.

The Perrys three children – Arthur Perry, Jr., Henry Haines Perry, and Priscilla Foster Perry — lived with them. By the 1910-1911 winter season, they also had been joined by Miss Clara Browning, Emma Perry’s niece, the daughter of Napoleon Browning and Annie McIntosh (Foster) Browning. 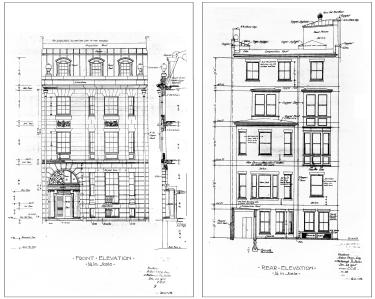 Arthur Perry, Jr., a bond broker, married in October of 1909 to Rebecca Savery Hutton. After their marriage they lived at 141 Revere.

Henry Haines Perry, an attorney and later a bond broker, married in April of 1913 to Edith Nicholson. After their marriage, they lived at 24 West Cedar and then in Brookline.

Priscilla Foster Perry married in June of 1917 to Dr. Francis Cooley Hall, a physician. After their marriage, they lived with her parents at 10 Marlborough until 1919, when they moved to 226 Marlborough.

10 Marlborough was inherited by the Perrys’ three children.  On January 16, 1933, Priscilla (Perry) Hall transferred her interest to her brothers,

In 1936, 10 Marlborough was the home of Emma Perry’s nephew, Louis Browning, a plumbing contractor, and his wife, Mary Ritchie (Greig) Browning.  They had lived in Somerville in 1935, and by 1937 were living in Brookline.

Arthur Perry, Jr. and Rebecca (Hutton) Perry made 10 Marlborough their Boston home. They previously had lived in Dover, where they continued to maintain a residence. 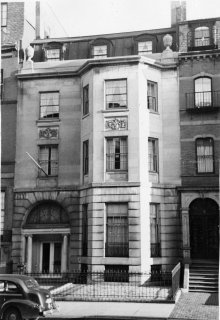 Arthur Perry died in February of 1963.  Rebecca Perry continued to live at 10 Marlborough until her death in October of 1964.

On July 1, 1965, 10 Marlborough was acquired from the estate of Rebecca Perry by Edwin Greene O’Connor and his wife, Veniette (Caswell) Weil O’Connor.

Edwin O’Connor was a novelist, best known for The Last Hurrah, written in 1956, and The Edge of Sadness, written in 1961, for which he received the Pulitzer Prize.

On September 29, 1967, 10 Marlborough was purchased from the O’Connors by Donald F. Winter and his wife, Katherine (Blodgett) Winter. Donald Winter was an attorney and served as a member of the Back Bay Architectural Commission for thirteen years, ten of them as Chairman. On June 6, 1974, Donald Winter transferred ownership of 10 Marlborough to Katherine Winter.

On January 28, 2014, 10 Marlborough was purchased from Katherine Winter by Michael A. Champa and his wife, Maureen O. Champa.

It remained assessed as a single-family dwelling in 2020.

When it was built in 1905-1906, 10 Marlborough replaced a townhouse at the same address built ca. 1864 by Theophilus P. Briggs, a carpenter and builder, as the home of merchant and banker William Thomas and his wife, Cornelia Jane (Bangs) Thomas.  They previously had lived at 2 Joy.  Catharine C. Thomas, William Thomas’s daughter by his first marriage, to Catharine (Crombie) Thomas, lived with them.

The land on which 10 Marlborough was built was part of a larger parcel purchased by William Thomas on May 2, 1860, from the Commonwealth of Massachusetts. The original parcel had a frontage of 84 feet on Marlborough and William Thomas retained the lot furthest east, with a 33.5 foot frontage. for his home at 10 Marlborough.

On December 29, 1862, he sold a 25.5 foot lot to the west, where 12 Marlborough would be built, to George Higginson and Henry Lee, Jr., trustees for the benefit of Harriet Jackson (Lee) Morse, the wife of Samuel Torrey Morse. Because both parties were “desirous of securing the rear of their respective lots from obstructions to light and air,” they entered into an agreement that, for a period of twenty years, neither would build any structure more than eight feet high in the rear of the lots at any point further than 75 feet south from Marlborough (thereby creating a rear yard setback of 37 feet from the alley). The restriction also applied to the remainder of William Thomas’s original parcel, a 25 foot lot to the west. When he sold it on March 31, 1863, to Charles U. Cotting (an 18 foot lot) and Samuel F. Dalton (a 7 foot lot), all four owners of the property entered into a new agreement, retaining the 75 foot limit on the depth of the structures at 10 and 12 Marlborough, but allowing a depth of 82 feet on the lots further west. The new agreement also expired after twenty years.

William Thomas died in June of 1872. Cornelia Thomas and Catharine Thomas continued to live at 10 Marlborough.

On May 8, 1874, Cornelia Thomas released her interest as William Thomas’s widow in 10 Marlborough to his three children by his first marriage, who were the residual legatees under his will: Helen (Thomas) Ellis, the wife of attorney Charles Mayo Ellis, who lived at 129 Commonwealth; Mary M. (Thomas) Guild, the widow of attorney George Dwight Guild, who lived at 108 Marlborough; and Catherine C. Thomas.

In the fall of 1874, the Thomas family offered 10 Marlborough for sale.  An October 17, 1874, Boston Globe advertisement by real estate dealer Robert E. Apthorp noted that the house had a 32×22 foot parlor on the first floor, doors “of solid mahogany and very elegant, plate glass front and rear, steam furnace and every luxury of appointment. This house was built by Briggs, and for substantial work and high finish challenges criticism.  There is also a hand elevator.”

On November 11, 1876, 10 Marlborough was purchased from the Thomas family by Anna Maria (Warren) Glidden, the wife if John Murray Glidden. They previously had lived at 107 Marlborough.

John Glidden was a partner in his father’s shipping firm of Glidden & Williams, a major owner of clipper ships operating between Boston and San Francisco.  After the firm was dissolved in 1877, he became treasurer and then president of the Pacific Guano Company and also was a commission merchant and selling agent for Pacific Guano in partnership with James F. Curtis.

On March 10, 1883, 10 Marlborough was purchased from the Gliddens by attorney George Wigglesworth. He and his wife, Mary Catherine (Dixwell) Wigglesworth, made it their home. They previously had lived at 133 Mt. Vernon. They also maintained a home in Manchester, Massachusetts.

During the 1893-1894 winter season, 10 Marlborough was the home of Frank Merriam and his wife, Teresa (Lovering) Merriam. They owned and usually lived at 183 Commonwealth, but in 1894 George and Ellen (Touzalin) Nickerson were living there.  By 1895, the Merriams had moved back to 183 Commonwealth.

By the 1894-1895 winter season, 10 Marlborough was the home of Elizabeth A. (Ames) Carney, widow of Walter E. Carney, who maintained it as a lodging house.  Her daughter, Loretto Fish Carney lived with her; she was registrar of the Boston Normal School of Gymnastics and later would become an instructor of physical education at Wellesley College (Walter Carney had been captain of the Loretto Fish; she was born at sea in the early 1870s, probably on that vessel).

Among her longer-term lodgers was Dr. Howard Augustus Lothrop, a physician and surgeon, who lived and maintained his offices at 10 Marlborough from mid-1894. He previously had lived in Europe for several years, where he had studied in Vienna and London.