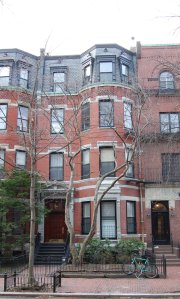 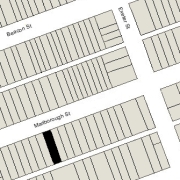 246 Marlborough was designed by architect Samuel D. Kelley and built in 1883-1884 by Joseph M. Keening, mason, for real estate dealer Samuel Horatio Whitwell. He is shown as the owner on the original building permit application, dated April 17, 1883.

Click here for an index to the deeds for 246 Marlborough, and click here for further information about the land between the south side of Marlborough and Alley 426, from Exeter to Fairfield.

246 Marlborough was one of nine contiguous houses (230-232-234-236-238-240-242-244-246 Marlborough) built in the same design and with similar architectural details, the only significant difference being the use of bows (rather than octagonal bays) at 244-246 Marlborough, the last two houses built. The original permit applications for all but 244 Marlborough are included in the Building Department’s files. Three of the applications – for 230, 232, and 246 Marlborough – indicate the architect as being Samuel D. Kelley. The other five applications do not indicate the name of the architect, but the houses are attributed to Samuel D. Kelley by Bainbridge Bunting’s Houses of Boston’s Back Bay, which, given the close similarity in design, appears to be correct.

The land for all nine houses was sold by the Commonwealth of Massachusetts through privately-negotiated agreements (rather than at public auctions) in November of 1879 and in early1880. Based on subsequent deeds and permits, it appears likely that the contracts for the four lots at 230-236 Marlborough, entered into on November 3, 1879, and for the four lots at 238-244 Marlborough, entered into on November 5, 1880, were with the Whitwells. The 25.3 foot lot at 246 Marlborough was composed of a 24.3 foot lot purchased from the Commonwealth on February 16, 1880, by George E. Niles, who sold it to Samuel H. Whitwell on March 23, 1883, and a one foot lot to the west that Samuel H. Whitwell purchased from the Commonwealth on January 15, 1884. The Whitwells probably retained Samuel D. Kelley to prepare a common design for the houses and retained Samuel T. Ames to oversee their construction, transferring to him their right to purchase the lots at 232-234-236 Marlborough as compensation. He then acted as the builder for those three lots and oversaw the construction of the other six. Alternatively, Samuel Ames may have held the original contracts for the three lots and used the same plans prepared by Samuel D. Kelley for his three houses.

In most cases, when the houses were nearing completion, they were sold to individual buyers who purchased the land directly from the Commonwealth and paid the Whitwells or Samuel T. Ames for the cost of the dwelling house. Frederick Whitwell kept 230 Marlborough, the first house built, as his home. Samuel H. Whitwell kept 244-246 Marlborough, buying the land and then reselling the land and houses to individual buyers.

On August 28, 1884, 246 Marlborough was purchased from Samuel H. Whitwell by Emery K. Benson, a dealer in cotton and cotton waste. He and his wife, Ruth Ellen (Baker) Benson, made it their home. They previously had lived in Salem. They also maintained a home in Beverly.

By the 1888-1889 winter season, it was the home of Edward Little Fuller and his wife, Mary Lincoln (Doane) Fuller.  They previously had lived at 274 Marlborough.  He was a wholesale boot and shoe dealer.  They continued to live at 246 Marlborough during the 1893-1894 winter season, but moved thereafter to The Holland at 50 Commonwealth.

On October 13, 1894, 246 Marlborough was purchased from Ruth Benson, by then a resident of Cambridge, by attorney John Oakes Shaw, Jr. He and his wife, Annie P. (Ames) Miles Shaw, made it their home. They had been married in August of 1893 and had lived briefly at 55 Gloucester after their marriage.

On January 8, 1908, John Shaw transferred the property into his wife’s name.

At about that time, an investigation into his affairs indicated that the assets of several the estates for which he was trustee had disappeared. On October 8, 1908, Annie Shaw transferred 246 Marlborough to Henry M. Rogers, the trustee in bankruptcy for her her husband’s estate,

John Shaw’s mental condition was such that he was committed to McLean Hospital, where he died in March of 1909. His March 17, 1909, obituary in the Boston Globe noted that the “receiver for Mr. Shaw’s estate, Henry M. Rogers, found only $435 assets, and evidence that he had mysteriously disposed of about half a million dollars.”

On May 24, 1909, 246 Marlborough was acquired from Henry Rogers by real estate dealer James Sumner Draper, and on June 8, 1909, it was acquired from him by wholesale textile merchant Charles Lewis Harding. He and his wife, Harriette Appleton (Knowles) Harding, lived there during the 1909-1910 winter season. Their usual residence was in Dedham.

On September 26, 1910, 246 Marlborough was purchased from Charles Harding by Dr. Cleaveland Floyd, a physician. He and his wife, Harriet Louise (Goodwin) Floyd, were married earlier that month and it was their first home together. He also maintained his medical offices there. Prior to their marriage, Dr. Floyd had lived in Brookline and had maintained his medical office at 213 Beacon.  They also maintained a home in Milton.

Cleaveland Floyd was a specialist in internal medicine and was a pioneer in the treatment of tuberculosis. In 1907, he had opened the first public clinic for treating tuberculosis in association with the Boston Consumptive Hospital.

Elizabeth Floyd married in June of 1937 to Donald Irving Stone; after their marriage, they lived in Cambridge.

Esther Floyd married in 1940 to Howard Bridgman; after their marriage, they lived in New London, Connecticut. Howard Bridgman later would become a professor of economics at Tufts University.

Susanna Floyd married at 246 Marlborough in January of 1942 to Dr. Robert H. Hepburn, a physician, the brother of noted actress Katharine Hepburn, who made Boston headlines when she attended the wedding. After their marriage, they lived at 28 West Cedar and then in Hartford, Connecticut.

Cleaveland Floyd, Jr., married in February of 1942 to Adelaide Louise Risley in Seattle, where he was serving as a pilot in the US Army Air Corps. He was killed in January of 1944 in Indo-China.

Cleaveland and Harriet Floyd continued to live at 246 Marlborough until about 1953.  By 1954, they had moved to Cambridge and he had relocated his office to 412 Beacon.

On October 19, 1953, 246 Marlborough was purchased from Harriet Floyd by Ellen Gertrude (Costello) Hogan, the wife of Edward Francis Hogan. They lived in Watertown.

The Costellos continued to live at 246 Marlborough in 1959.

On April 14, 1959, 246 Marlborough was purchased from Ellen Hogan by real estate dealers Stuart H. Hastings and Joseph A. Gautreau. That same month, they applied for (and subsequently received) permission to convert the property from a lodging house into ten apartments.

On August 14, 1980, the H. Motley Real Estate Trust transferred the property to Edward H. Appelstein as trustee of The 246 Marlborough Street Realty Trust.