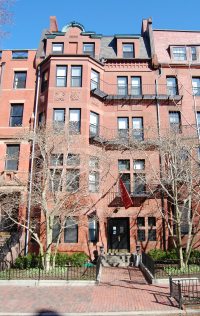 247 Marlborough was designed by architect Theodore M. Clark and built in 1881-1882 by Vinal & Dodge, masons, and Creesy & Noyes, carpenters, as the home of Josiah Bradlee and his wife, Alice (Crowninshield) Bradlee. He is shown as the owner on the original building permit application dated November 4, 1881. He purchased the land for the house from the Commonwealth of Massachusetts on August 24, 1881.

Click here for an index to the deeds for 247 Marlborough, and click here for further information about the land between the north side of Marlborough and Alley 417, from Exeter to Fairfield.

The Bradlees previously had lived at 14 Marlborough in 1882. They also maintained a home at Peach’s Point in Marblehead.

During the 1889-1890 winter season the Bradlees were living elsewhere and 247 Marlborough was the home of Thurlow Weed Barnes and his wife, Isabel Frances (Morris) Barnes. They previously had lived at the Tudor (northwest corner of Beacon and Joy), where they had moved following their wedding in October of 1887.  They also maintained a home in Nahant and were building a Boston home at 10 Charlesgate East.

Thurlow Barnes had been associated with his grandfather’s newspaper in Albany, New York, until about 1887, when he moved to Boston and joined the publishing firm of Houghton-Mifflin & Company.

The Barneses traveled abroad during the 1890-1891 winter season. Upon their return, they lived at the Hotel Vendôme. They sold 10 Charlesgate East and moved to New York City.

On October 28, 1902, 247 Marlborough was purchased from Alice Bradlee by Jane Appleton (Dwight) Dexter, the wife of Dr. Franklin Dexter. They previously had lived at 148 Marlborough. They also maintained a home in Prides Crossing.

Franklin Dexter was a physician and professor at Harvard Medical School.

Dr. Dexter died in January of 1927. Jane Dexter continued to live at 247 Marlborough. Their son, Franklin Dexter, Jr., a lawyer, lived with her.

In April of 1937, Franklin Dexter, Jr., purchased 249 Marlborough. On June 22, 1937, he and his mother entered into a party wall agreement governing the wall between the two houses. They moved from 247 Marlborough to 249 Marlborough soon thereafter. They also continued to maintain their home in Prides Crossing.

On June 29, 1939, 247 Marlborough was purchased from Jane Dexter by the Marlborough School, a secretarial school located at 245 Marlborough.  A July 16. 1939, Boston Globe article on the transaction commented that the “property adjoins the executive headquarters of the school and the building will afford facilities for additional dormitories, offices, conference, and school rooms.” Marlborough School also owned 261 Marlborough and 227 Commonwealth.

In January of 1942, Chandler School applied for permission to convert 247 Marlborough from a single-family dwelling into a lodging house. It subsequently abandoned the permit application. In December of 1942, it applied for (and subsequently received) permission to convert the property from “school studios” into a lodging house.

Ann MacQuarrie continued to live at 247 Marlborough until 1959.

On August 31, 1959, 247 Marlborough was purchased from Ann MacQuarrie by Newman Preparatory School located at 245 Marlborough. In October of 1960, the school applied for (and subsequently received) permission to remodel 247 Marlborough and combine the two properties into one school building. In 1966, Newman School acquired 251 Marlborough and 253 Marlborough (it sold both buildings in 1988). 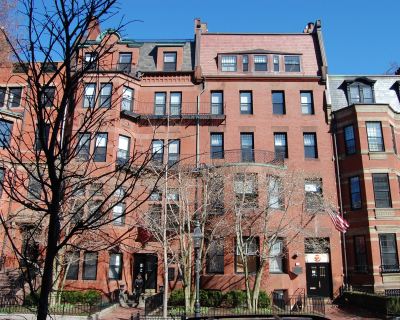