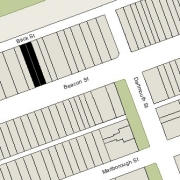 Bainbridge Bunting, in the Appendix to his Houses of Boston’s Back Bay, does not indicate an architect for 252-260 Beacon. However, in the introduction to the Appendix, he notes that “subsequent to the second printing of this book in 1968 the attributions to important architects of several early Back Bay houses have been brought to my attention by friends.” Among these, Bunting indicates that, “from a sifting of mountainous drawings and office correspondence now in the possession of the Boston Public Library, Wheaton Holden has been able to identify that 254-260 Beacon were designed by Peabody and Stearns. An August 23, 1871, Boston Traveller article on work underway by Peabody and Stearns indicated that they designed “a block of 5” next to the two houses they designed for Nathaniel Hooper (262-264 Beacon), and that the five houses were “nearly finished, and for sale by H. B. Williams.”

The land on which 252-260 Beacon were built was owned by Samuel Frothingham, part of a larger parcel originally purchased on December 15, 1863, from the Boston and Roxbury Mill Corporation by attorney John Duncan Bryant. On December 29, 1870, after the houses were completed, Samuel Frothingham sold Henry Williams the land (“that lot of land in Boston on which said Williams has erected at his expense five dwelling houses”).

Click here for an index to the deeds for 258-260 Beacon, and click here for further information on the land on the north side of Beacon, including the Storrow Memorial Embankment on the Esplanade.

Samuel Frothingham was Henry Bigelow Williams’s father-in-law. He and his wife, Maria Louisa (Whitredge) Frothingham, lived at 317 Dartmouth. Henry Williams and his wife, Sarah Louisa (Frothingham) Williams, lived with them; Sarah Williams died in July of 1871 in a carriage accident.

258 Beacon and 260 Beacon were combined in the early 1940s and operated as a multiple dwelling, either a lodging house or apartments.

On August 21, 1871, 258 Beacon was acquired from Henry Bigelow Williams by his father-in-law, Samuel Frothingham.

Samuel Frothingham died in December of 1872. In his will, he left all his property to his widow, Maria Louisa (Whitredge) Frothingham.

By 1874, 258 Beacon had been leased from Maria Frothingham by Richard Warren and his wife, Susan Billings (Gore) Warren. He had been an attorney and assignee in bankruptcy in New York City, where they had lived on West 21st Street in 1872. They continued to live at 258 Beacon until his death in April of 1875, after which his widow moved to 74 Marlborough.

The Frothinghams were living elsewhere in the early 1880s.

By the 1883-1884 season, 258 Beacon was the home of real estate broker James Freeman Curtis and his wife Helen (Gardner) Curtis.  They previously had lived at 99 Mt. Vernon.  They moved soon thereafter to a new home they had built at 253 Marlborough.

Maria Frothingham resumed living at 258 Beacon during the 1884-1885 winter season. Frederick, Julia, and Eliza Frothingham continued to live with her.

Maria Frothingham died in August of 1889. In her will, she left 258 Beacon to Frederick, Julia, and Eliza, who continued to live there during the 1891-1892 winter season.

On June 28, 1892, 258 Beacon was purchased from Frederick, Julia, and Eliza Frothingham by Mary Washburn (Baker) Strong, the wife of Dr. Charles Pratt Strong, a physician and surgeon. They previously had lived at 1 Exeter.

Frederick and Julia Frothingham moved to the Hotel Kempton at 237 Berkeley. In July of 1892, Eliza (Lillie) Frothingham married to Alfred W. Martin, a Unitarian clergyman. After their marriage, they lived in Tacoma, where he was pastor of the First Free Church.

Charles Strong died in March of 1893.  Mary Strong continued to live at 258 Beacon, joined by her brother-in-law and sister, William Henry Burlen and Caroline Clapp (Baker) Burlen, and her mother, Sarah Bryant (Dennie) Baker, the widow of William Wilson Baker.  They previously had lived in an apartment at 308-310 Commonwealth.  William Burlen was a hide and leather merchant.

They continued to live there during the 1896-1897 winter season.  In 1897, Mary Strong traveled abroad, and William and Caroline Burlen and Sarah Baker moved to an apartment at 502 Beacon.

On June 3, 1897, 258 Beacon was acquired from Mary Strong by Annie Hardon (Burr) Farlow, the wife of Dr. John Woodford Farlow. They previously had lived at 234 Clarendon.

John Farlow was an ear, nose, and throat specialist, and served as an instructor in laryngology at Harvard Medical School.  He continued to own and maintain his medical offices at 234 Clarendon after he and his wife moved to 258 Beacon.

The Farlows’ two children, Margaret Farlow and John Smith Farlow, lived with them.

Margaret Farlow married in June of 1902 to William Richards Castle, Jr. He was a real estate and insurance broker from Honolulu, where they lived after their marriage. They returned to Boston in 1903 when he became an assistant instructor in English at Harvard. They lived in an apartment at 330 Dartmouth and then at 243 Beacon. In 1907, he was appointed Assistant Dean of Harvard. In 1919, he joined the State Department and served in various capacities, including as Under Secretary of State in the Hoover Administration.

John Smith Farlow graduated form Harvard Law School in 1905 and became a lawyer in Boston. He continued to live with his parents.

The Farlows continued to live at 258 Beacon during the 1905-1906 winter season, but moved thereafter to a home they had built at 127 Bay State Road.

On June 22, 1906, 258 Beacon was purchased from Annie Farlow by Dr. Joseph Lincoln Goodale. He and his wife, Adelaide May (Evans) Goodale, made it their home. They previously had lived at 397 Beacon.

Joseph Goodale was a physician specializing in diseases of the throat and an instructor in laryngology at Harvard Medical School.

Adelaide Goodale died in February of 1927.

On March 1, 1939, 258 Beacon was acquired by real estate dealer Ray C. Johnson. It subsequently changed hands and by 1940 was being operated as a lodging house.

On July 8, 1940, 258 Beacon was acquired by Elizabeth L. Maggioni, who continued to operate it as a lodging house. She previously had lived at 627 Commonwealth. She was a teacher at Prince School on Newbury Street. In April of 1942, she acquired 260 Beacon.

On March 1, 1872, 260 Beacon was purchased from Henry Bigelow Williams by real estate dealer Charles B. Wilson.

On January 1, 1873, 260 Beacon was purchased from Charles Wilson by Mary (Crowninshield) Mifflin, the wife of Dr. Charles Mifflin, a physician. They previously had lived at 80 Beacon. They also maintained a home in Nahant.

Their unmarried son, George Harrison Mifflin, lived with them.  George Mifflin was a partner in the publishing firm of Houghton, Osgood & Co.  In the 1870s, the firm (previously Hurd and Houghton) had acquired the Atlantic Monthly magazine and the Ticknor & Fields publishing company.  In 1895, the founder, Henry Oscar Houghton, died, and control of the firm passed to George Mifflin.  In 1908, it was incorporated as Houghton Mifflin Company.

In about 1874, Charles and Mary Mifflin were joined at 260 Beacon by  their son and daughter-in-law, Benjamin Crowninshield Mifflin and Sarah Elizabeth (Learned) Mifflin.  He was a banker and broker.  They previously had lived at 277 Clarendon.

Charles Mifflin died in December of 1875.

George Mifflin married in October of 1877 to Jane Appleton Phillips.  After their marriage, they lived at 85 Marlborough.

Benjamin and Sarah Mifflin continued to live at 260 Beacon in 1877, but had moved to Pittsfield by 1878.

George Mifflin subsequently acquired his siblings’ interests in 260 Beacon and on July 31, 1894, it was acquired from him by Horatio Appleton Lamb. He and his wife, Annie Lawrence (Rotch) Lamb, made it their home. They previously had lived at 86 Marlborough.

Horatio Lamb was a wholesale dry goods merchant and later would serve as treasurer of Simmons College.

On June 14, 1904, 260 Beacon was acquired from Horatio Lamb by Miss Evelyn Orville Ames. In June of 1905, she entered into party wall agreements with the owners of 258 Beacon and 262 Beacon to extend the rear of the house by 31 feet 8 inches. While the house was being remodeled, she probably lived at 355 Commonwealth and in North Easton with her mother, Anna Coffin (Ray) Ames, the widow of Oliver Ames.

By the 1906-1907 winter season, Evelyn Ames had made 260 Beacon her home. In June of 1909, she married Frederick Garrison Hall, a noted artist. They continued to live at 260 Beacon and also maintained a home in East Gloucester.

In about 1913, they were joined at 260 Beacon by Evelyn Hall’s brother and sister-in-law, Oakes Ames and Blanche (Ames) Ames.  Their primary residence was in North Easton.  He was a botanist and professor at Harvard.  They continued to live at 260 Beacon in 1914.

After acquiring 260 Beacon, Elizabeth Maggioni operated both 258 and 260 Beacon as lodging houses. She continued to live at 258 Beacon until about 1964.

On October 22, 1964, 258 Beacon and 260 Beacon were purchased from Elizabeth Maggioni by Norman A. Chaletzky and Stanley Gruber, trustees of the Norstan Realty Trust.

The Norstan Realty Trust filed to remodel the combined property and convert it into twelve apartments. A copy of the filing is not included in the Boston Building Department on-line records, but it probably was at this point that front façades of both buildings were significantly “modernized,” including removal of the original bays on both buildings and lowering the entrance to street level. In December of 1964, Norstan filed for (and subsequently received) permission to amend the plans and add a penthouse floor, increasing the number of units from twelve to thirteen.

On January 2, 1965, 258-260 Beacon was acquired by the Watts Realty Corporation, and on the same day, it transferred the property to Stanley Gruber and John Black, co-partners doing business as 260 Beacon. 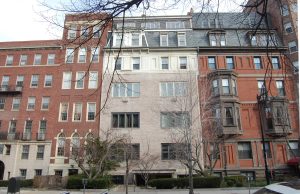