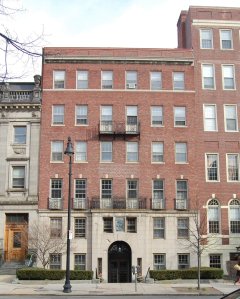 264 Beacon is located on the north side of Beacon, between  Dartmouth and Exeter, with 262 Beacon to the east and 266 Beacon to the west.

264 Beacon Street was designed by Bigelow and Wadsworth, architects, and built in 1927-1928 as a six-story (described as five stories “above basement”) medical office building. It was built for real estate dealers Elliott Henderson and Gerald D. Boardman as trustees of the 264 Beacon Street Trust, which is shown as the owner on the original building permit application, dated October 24, 1927, and on the application for permission to raze the original house at 264 Beacon, dated November 2, 1927.

Click here for an index to the deeds for 264 Beacon, and click here for further information on the land on the north side of Beacon, including the Storrow Memorial Embankment on the Esplanade.

The 264 Beacon Street Trust continued to own the property until February 24, 1938, when the Conveyancers Title Insurance and Mortgage Company, itself in receivership, foreclosed on its mortgage to the trust and took possession of the property.

The property changed hands and on September 29, 1947, was acquired by real estate dealers Warren-Stevens, Inc. (H. Leon Sharmat, treasurer)
.
In 1948, the fifth and sixth floors were damaged by fire.

On May 7, 1954, Warren-Stevens, Inc., transferred the property to Mollie Hurwitz, trustee of the 264 Beacon Street Realty Trust.

On February 2, 1955, 264 Beacon was acquired from H. Leon Sharmat, as successor trustee of the 264 Beacon Street Realty Trust, by the Lordonie Realty Corporation.

In May of 1960, Lordonie Realty filed for (and subsequently received) permission to change the occupancy of 264 Beacon from medical offices to medical offices and twelve apartments (to be located on the fourth, fifth, and sixth floors). In August of 1962, it filed for permission to amend the permit application to add an additional story, increasing the number of apartments from twelve to fourteen. The application was denied, but granted on appeal. However, the additional story was not built. Plans for the remodeling and the penthouse addition, designed by architect Leonard Saroff, are included in the City of Boston Blueprints Collection in the Boston City Archives (reference BIN R-229).

In October of 1961, 262 Beacon was acquired by M. Leonard Lewis, president of Lordonie Realty.

In August of 1962, Lordonie Realty filed for (and subsequently received) permission to change the occupancy of 264 Beacon to permit a pharmacy in addition to the medical offices and apartments.

In December of 2000, Lordonie Realty filed for (and subsequently received) permission to change the occupancy to 16 medical/professional offices and two apartments (the pharmacy having been replaced by a physical therapy office).

264 Beacon remained assessed as a commercial building in 2021.

264 Beacon was designed by architects Peabody and Stearns and built in 1871-1872, one of two contiguous houses (262-264 Beacon) built for Nathaniel Hooper, a dry goods commission merchant and former shipping merchant in the East India trade.

The houses were built on the eastern 60 feet of a 100 foot parcel purchased on April 5, 1867, by a trust established by Nathaniel Hooper on January 31, 1867, for his benefit and for the benefit of his children with his first wife, Harriet Rose (Wilson) Hooper, who had died in May of 1864. He established the trust in anticipation of his remarriage in February of 1867 to Emma Lincoln Bird. The land was part of a larger parcel that had changed hands several times; it originally had been purchased on December 15, 1863, from the Boston and Roxbury Mill Corporation by attorney John Duncan Bryant.

262 Beacon was built on the eastern 19 feet of the 100 foot parcel and 264 Beacon was built next to it on a 41 foot lot. The western 40 feet remained vacant until October of 1885 when the trust sold it to Francis and Eliza Skinner, who had 266 Beacon built as their home.

An August 23, 1871, Boston Traveller article on work underway by Peabody and Stearns indicated that the two houses were “partly done” and built “of Ohio stone and brick.”

264 Beacon became Nathaniel Hooper’s home. He previously had lived at 27 Commonwealth with his brother and sister-in-law, Samuel and Anne (Sturgis) Hooper. His second wife, Emma (Bird) Hooper, had died in December of 1869 while they were living there.

John Francis Hooper married in July of 1879 to Marie Allan Thomas, and they continued to live at 264 Beacon with Nathaniel Hooper.  Charles Rose Hooper died in September of 1883.

Nathaniel Hooper continued to live at 264 Beacon until his death in May of 1886.  After his death, his unmarried daughters and youngest son — Jane, Elizabeth, and Samuel — moved to 141 Beacon to live with their aunt, Eunice Hooper.

On June 23, 1886, 264 Beacon was purchased from Nathaniel Hooper’s trust by George Cabot Lee. He and his wife, Caroline Watts (Haskell) Lee, made it their home.  They previously had lived at 96 Beacon and before that at 196 Beacon. They also maintained a home in Chestnut Hill.

George Cabot Lee was an investment banker in his family’s firm. Lee, Higginson & Co., and also a manager of the Union Safe Deposit Vaults, operated by by the firm.

The Lees’ five unmarried children lived with them: Rose Lee, Harriet Paine Lee, Caroline Haskell Lee, Isabella Mason Lee, and George Cabot Lee, Jr.  Their daughter, Alice Hathaway Lee, had married in October of 1880 to Theodore Roosevelt, future President of the United States, and had died on February 14, 1884, two days after the birth of their daughter, Alice Roosevelt.

Harriet Lee married in December of 1888 to Charles Mifflin Hammond, a vineyard owner in Lake County, California, where they lived after their marriage.

Caroline Lee married in October of 1889 to Sewall Henry Fessenden, Jr., of 17 Hereford, a note broker.  After their marriage, they lived in Chestnut Hill.

Rose Lee married in April of 1892 to Reginald Gray, an attorney. After their marriage, they lived in Chestnut Hill.

Isabella Lee married in December of 1895 to George Saltonstall Mumford.of 197 Beacon, general manager of a warehouse company. After their marriage, they lived in Chestnut Hill and he became a manager of the Union Safe Deposit Vaults and secretary of the City Trust Company.

George Cabot Lee, Jr., married in November of 1898 to Madeline Jackson of 8 Fairfield.  He was an investment banker in his father’s firm. After their marriage, they lived in apartment at 330 Dartmouth and then in Chestnut Hill.

George and Caroline Lee continued to live at 264 Beacon until his death in March of 1910.  After his death, Caroline Lee moved to Chestnut Hill.

On December 12, 1910, 264 Beacon was purchased from Caroline Lee by attorney Robert Treat Paine, II. He and his wife, Ruth (Cabot) Paine, made it their home. They previously had lived in Brookline. They also maintained a home at Coolidge Point in Manchester, Massachusetts.

They continued to live at 264 Beacon during the 1923-1924 winter season, after which they made Chestnut Hill their home.

On March 7, 1927, Robert Treat Paine, II, foreclosed on the mortgage given by James Burr when he bought 264 Beacon and took back possession of the property.

On September 19, 1927, 264 Beacon was acquired from Robert Treat Paine, II, by real estate dealers Elliott Henderson and Gerald D. Boardman as trustees of the 264 Beacon Street Trust. They razed the house later that year. 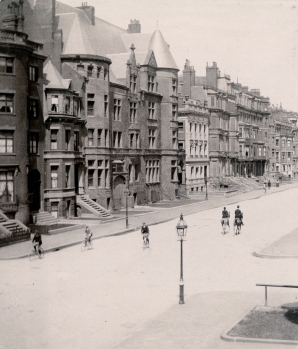 North side of Beacon, looking east from Exeter, 276 Beacon in the foreground (ca. 1898), courtesy of the Bostonian Society

Rear façades of the houses on the north side of Beacon Street, with 280 Beacon on the right, Jun1904; courtesy of the Boston City Archives