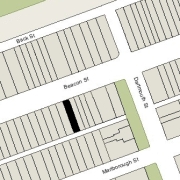 269 Beacon is located on the south side of Beacon, between Dartmouth and Exeter, with 267 Beacon to the east and 271 Beacon to the west.

The houses were built for building contractor George Wheatland, Jr., on land owned by dry goods merchant Eben Dyer Jordan, co-founder of the firm of Jordan, Marsh & Company. He had purchased the land from the Commonwealth of Massachusetts on January 19, 1871. Eben Jordan and his wife, Julia M. (Clark) Jordan, lived at 46 Beacon.

Click here for an index to the deeds for 269 Beacon, and click here for further information about the land between the south side of Beacon and Alley 418, from Dartmouth to Exeter.

On August 30, 1870, the Boston Traveller reported that Weston & Shepard had filed a Notice of Intention with the Board of Aldermen to build 361-369 Beacon, “four brick houses for George Wheatland.” Construction probably started soon thereafter.

On December 5, 1874, 269 Beacon was offered for sale at public auction.  The December 2, 1874, Boston Traveller advertisement by auctioneer Samuel Hatch & Co. indicated that the house had eleven rooms and was “finished partly in hard wood, and built by the day by Bourn & Levitt [sic].”  Bourn & Leavitt was a partnership of carpenters Robert Tower Bourn (Bourne) and William Leavitt, who presumably built the house in conjunction with masons Weston & Shepard, who had filed the original Notice of Intention to build 361-369 Beacon.

The house did not sell at the auction.

On February 15, 1876, it was purchased from Eben D. Jordan by Hannah B. (Thayer) Brown, the wife of Henry Howard Brown, a boot and shoe dealer. They previously had lived at 4 Commonwealth with his parents, William and Harriet (Rice) Brown.

The Browns continued to live at 269 Beacon during the 1889-1890 winter season, but moved thereafter to Brookline.

On November 6, 1889, 269 Beacon was acquired from Hannah Brown by George Henry Cotton, a manufacturer of brass tubing and also the founder of the Belmont Springs Water Company. He and his wife, Cora N. (Doane) Stimpson Cotton, lived at 16 Chestnut and, by the, 1890-1891 would be living at 193 Beacon. They also maintained a home in Belmont.

On July 10, 1890, 269 Beacon was purchased from George Cotton by Roland Crocker Lincoln, He and his wife, Alice North (Towne) Lincoln, made it their home. They previously had lived in Manchester, where they continued to maintain a home.

Roland Lincoln was an attorney in Boston.  Alice Lincoln was active in public welfare issues, and served as manager of the New England Hospital for Women and Children and of the Burnap Free Home for the Aged.

On November 23, 1898, he transferred the property into his wife’s name.

They continued to live at 269 Beacon during the 1907-1908 winter season,  but moved thereafter to Jamaica Plain.

On April 15, 1909, 269 Beacon was purchased from Alice Lincoln by Ruth (Perkins) Bailey, the wife of Dr. Walter Channing Bailey. They previously had lived at 267 Clarendon.

Walter Channing was a physician and also maintained his office at 269 Beacon.

By the 1914-1915 winter season, 269 Beacon was the home of Rev. George Alexander Strong and his wife, Margaret Phillips (Reynolds) Strong.  He had been Rector of Christ Church in New York City until 1913.  They continued to live at 269 Beacon during the 1915-1916 season, but moved soon thereafter.

By the 1916-1917 winter season, it was the home of department store heir Harold Leufroi Chalifoux and his wife, Elizabeth Alice (Burrage) Chalifoux.  They had married in November of 1916 and 269 Beacon probably was their first home together. They also maintained a home in Beverly.  They continued to live at 269 Beacon until the 1918-1919 season, which they spent in Washington DC, after which they moved to 342 Beacon.

During the 1919-1920 winter season, 269 Beacon was the home of British Consul General Henry Gloster Armstrong and his wife, Margaret M. (Hanway) Armstrong. Their usual residence was in New York City.

On August 10, 1922, 269 Beacon was purchased from Ruth Bailey by Eleanor F. (Fabyan) Frothingham, the wife of cotton broker Theodore Frothingham, Jr. They previously had lived at 19 Commonwealth.  They also maintained a home in Beverly Farms.

During the 1929-1930 winter season, the Frothinghams were living elsewhere and 269 Beacon was the home of Edward Preble Motley, Jr., and his wife, Dorottya (Fremont-Smith) Motley. During the 1927-1928 season, they had lived at 81 Myrtle. They also maintained a home in Hamilton.

By the 1930-1931 winter season, the Motleys had moved to an apartment at 6 Arlington and 269 Beacon was once again the Frothinghams’ Boston home.

Their daughter, Eleanor (Sissy) Frothingham, was a night-club singer in the 1940s.

The Frothinghams divorced in August of 1942 and Eleanor Frothingham remarried that same month to Dr. George R. Luton of Santa Barbara, California.

He continued to live at 269 Beacon and in 1950 remarried to Mrs. Ruth Esther (Warren) MacWilliams Eaton, the former wife of Harold Lee MacWilliams and of Dana Hopkins Eaton.

Theodore and Ruth Frothingham continued to live at 269 Beacon until about 1966, when they moved to an apartment at 9 Gloucester.

On October 31, 1966, 269 Beacon was purchased from Theodore Frothingham by Rose Rochelle, trustee of the Rochelle Realty Trust.

Rose Rochelle (Goldberg) Levin Glazer Bornstein was the former wife of Reuben Levin and Max L. Glazer. She was a retired pianist and entertainer who performed as (and legally changed her name to) Rose Rochelle. She had married in the early 1960s to Morris Bornstein, after which she was known as Rose Bornstein. He died or they separated by 1965. She owned and lived in an apartment house at 273 Beacon, and also owned several other apartment buildings and lodging houses in the Back Bay and South End.

On February 7, 1968, 269 Beacon was acquired from Rose Rochelle by Russell J. Amaral, trustee of the Ramsey Realty Trust. In January of 1968, prior to taking title, he filed for (and subsequently received) permission to convert the property from a single-family dwelling into eight apartments.

On December 15, 1968, he transferred the property to Quabin Realty, Inc., of which he was the treasurer.

On September 1, 1976, they converted the property into nine condominium units, the 269 Beacon Street Condominium.