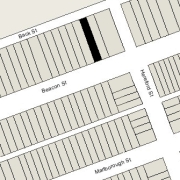 452 Beacon is located on the north side of Beacon, between Hereford and Massachusetts Avenue, with 450 Beacon to the east and 454 Beacon to the west.

452 Beacon was designed by John H. Sturgis, architect, and built in 1887-1889 by George Eldridge, mason, as the home of Dr. Henry Parker Quincy and his wife, Mary Gardner (Adams) Quincy. He is shown as the owner on the original building permit application, dated December 15, 1887, and on the final building inspection report, dated May 30, 1889 (bound with the report, located in the Boston City Archives (volume 29, page 99) is a water-damaged drawing of the second floor plan).

Henry Quincy purchased the land for 452 Beacon on October 20, 1887, from William Simes, part of a parcel William Simes had purchased from the Boston and Roxbury Mill Corporation on March 15, 1886.

The deeds from the Boston and Roxbury Mill Corporation for the land between Hereford and Massachusetts Avenue included language specifying that only dwellings and associated outbuildings (including stables) could be built on the land and that the buildings were to be set back 20 feet from Beacon. The deeds for the land between 460 Beacon and Massachusetts Avenue were entered into in the early 1890s and also included restrictions limiting to one story any building in the rear north of a line 90 feet from Beacon. The deeds for the land between Hereford and 458 Beacon, which were from 1886, did not include language limiting buildings in the rear. As a result, the owners of the land at 448-458 Beacon entered into individual agreements to limit the depth of the houses that were built on their land and restrict the height of outbuildings in the rear to one story. On August 2, 1909, all of the owners of the property on the north side of Beacon between Hereford and Massachusetts Avenue (other than the Mt. Vernon Church) entered into an agreement to “continue for twenty years longer [to December 31, 1929] the existing freedom from irregular building and obstruction of view which they now enjoy from the rear portion of their houses.”  On December 30, 1929, the owners of 448-480 Beacon extended this agreement to expire on December 31, 1939.

452 Beacon was completed in 1889 and by the 1889-1890 winter season, Henry and Mary (Adams) Quincy had made it their Boston home. They previously had lived at 86 Marlborough. They also maintained a home in Dedham. Their daughters, Dorothy and Elinor, lived with them.

Henry Quincy was a physician and an instructor of histology at Harvard Medical School.

In June of 1899, Mary Quincy purchased the stable at 339 Newbury. It remained in the Quincy family until 1925.

Dorothy Quincy married in February of 1906 to Frederic Russell Nourse, Jr., a bond broker. After their marriage, they lived at 541 Commonwealth and later in Dedham.

Henry Quincy died in March of 1899. Mary Quincy and Elinor Quincy continued to live at 452 Beacon.

On May 1, 1919, Mary Quincy transferred 452 Beacon to her nephew, Charles Francis Adams, II, and Robert Homans, the husband of her niece, Abigail (Adams) Homans, as trustees for her daughters, Dorothy and Elinor.

Elinor Quincy married in October of 1920 to Claude DeWitt Simpson of Jackson, Wyoming. After their marriage, they made their home on a ranch in Wyoming.

Mary Quincy continued to live at 452 Beacon during the 1920-1921 winter season, after which made her home, Bankside, in Dedham her year-round residence. 452 Beacon continued to be owned by the trust she had established for her daughters, which leased it to others.

By the 1921-1922 winter season, 452 Beacon was the home of shoe manufacturer Albert J. Sweet and his wife, Maude (Webster) Sweet.  They previously had lived at 269 Beacon.  They continued to live at 452 Beacon during the next season, but moved thereafter to Swampscott.

By the 1923-1924 winter season, 452 Beacon was the home of Frank Herbert Thayer and his wife, Alice Augusta (Waterman) Thayer.  They previously had lived at The Charlesgate at 535 Beacon.  He was a shoe manufacturer with his father’s firm, N. B. Thayer & Co.  They continued to live at 452 Beacon during the 1926-1927 season, but moved thereafter to an apartment at 282 Beacon. 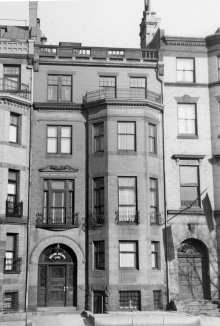 By late 1927, 452 Beacon was the home of Alexander Lynde Cochrane and his wife, Vivian Hervey (Wessell) Cochrane.  They previously had lived in Hamilton.  A. Lynde Cochrane had retired in about 1907 from his family’s chemical business.  Vivian Wessell Cochrane was a former stage actress.  Prior to their marriage in August of 1917, he had lived at 257 Commonwealth with his parents, Alexander and Mary (Sullivan) Cochrane.  A. Lynde and Vivian Wessell’s daughter, Lucy Douglas Cochrane, became an actress and author under the name C. Z. Guest.

Alexander Cochrane died in January of 1928.  Vivian Cochrane moved soon thereafter and remarried in November of 1930 to Dudley Leavitt Pickman, Jr.; after their marriage they lived briefly at 127 Beacon and then at 303 Commonwealth.

Elinor (Quincy) Simpson died in June of 1927 in Saguache Co., Colorado, and Mary (Adams) Quincy died in August of 1928 in Dedham. Frederic and Dorothy (Quincy) Nourse continued to live in Dedham.

On January 3, 1929, 452 Beacon was purchased from the trust established by Mary Quincy by William Emery Nickerson. He and his wife, Nellie R. (Partridge) Nickerson, lived at 454 Beacon. He died in June of 1930.

The Nickerson family probably used 452 Beacon as an annex to their home next door. The house was not listed in the 1929-1935 Blue Books and was shown as vacant in the 1930-1934 City Directories.

On December 31, 1934, 452 Beacon was purchased from William Nickerson’s estate by the Reconstruction Clinic and Hospital. Prior to taking title to the property, it had applied for (and subsequently received) permission to convert the property from a single-family dwelling into doctor’s offices.

From 1935, 452 Beacon was the location of the Boston Evening Clinic and Hospital. It continued to be located there until about 1953, when it moved to 397 Commonwealth.

On June 25, 1953, 452 Beacon was purchased from the Boston Evening Clinic by the Massachusetts School of Chiropody, and became the location of the New England Foot Clinic.

On April 20, 1955, 452 Beacon was acquired from the Massachusetts School of Chiropody by George Irwin Rohrbough, president of Chandler School for Women, for use in conjunction with Chandler School’s facilities at 448 Beacon. He and his wife, Martha Fraser (Waugh) Rohrbough, lived in Cambridge.

In January of 1956, he applied for (and subsequently received) permission to convert the property from doctor’s offices into a school.

On June 15, 1971, the Chandler School purchased 448 Beacon and 452 Beacon from George and Martha Rohrbough. He retired as president of the school in 1972.

On June 20, 1975, the Shawmut Community Bank foreclosed its mortgages on 448 Beacon and 452 Beacon and took possession of the properties.

In March of 1978, prior to taking title to the property, the 452 Beacon Street Trust applied for (and subsequently received) permission to convert the property into seven apartments.

On July 28, 1978, it converted the property into seven condominium units, the 452 Beacon Condominium.