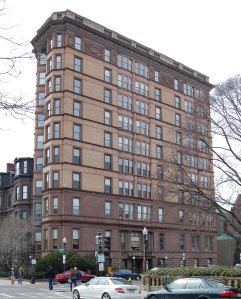 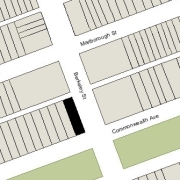 William H. H. Newman was a real estate dealer and developer.  He owned the Hotel Cluny at 543 Boylston, also designed by J. Pickering Putnam, where he and his wife, Sarah E. (Cole) Newman, lived.  He purchased the original townhouse at 29 Commonwealth on May 19, 1893, demolished it, and filed the original permit application for Haddon Hall on July 16, 1894. 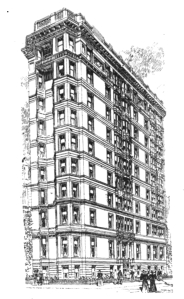 282 Berkeley, architect’s rendering (ca. 1895), from Modern Architecture: A Book for Architects and the Public, by H. Heathcote Statham

“W. H. H. Newman is to erect a handsome new apartment hotel at 29 Commonwealth av. corner Berkeley st.  The building will be nine stories high and will contain all the modern conveniences.  The lot, which is the old Bowditch place, was purchased at auction by Mr. Newman for $83,000.

“The plans, which have been drawn by J. Pickering Putnam, call for a structure having a frontage on Commonwealth av. of 22 feet, from which it reaches back about 20 feet; it is 104 feet deep on Berkeley st.  there will be 26 suites of three or four rooms each.  The building will be made of stone, brick, and steel, and will cost about $200,000.  The main entrance will be on Commonwealth av.”

Plans and architectural specifications for the building — including elevations, floor plans, piling and foundation plans, and beam and steel framing plans — are included in the City of Boston Blueprints Collection in the Boston City Archives (reference BIN A-88).

At 125 feet, Haddon Hall was significantly higher than its neighboring houses.  The Back Bay’s deed restrictions, written before elevators, imposed a minimum height of three stories but no maximum height.  A community movement, organized under the auspices of the Twentieth Century Club, sought legislation limiting the permissible height.  As a result, in 1896 a limit of 70 feet was imposed on Commonwealth Avenue (this limit was later reduced further to 65 feet).  Michael Holleran’s Boston’s Changeful Times: Origins of Preservation & Planning in America (The Johns Hopkins University Press; 1998) discusses this community effort in detail.

On October 24, 1900, Haddon Hall was purchased from William H. H. Newman by Henry Staples Potter, Jr., and one month later, on November 20, 1900, it was acquired from him by William F. Wharton and Edward Bangs, trustees of the Apartment House Trust.

On December 5, 1900, the trust was reorganized as the Metropolitan Associates.

On January 7, 1907, the Metropolitan Associates entered into a party wall agreement with Marcus Kimball, owner of 31 Commonwealth. Among its provisions, the agreement specified that the owner of 282 Berkeley (29 Commonwealth) would retain the right to have windows in the party wall “until such time as” 31 Commonwealth or a new building on “said estate shall be carried up to such height as to cover the same.” 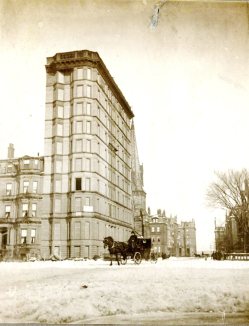 In about 1928, Haddon Hall was converted from apartments into medical (primarily dental) offices. The last residents were listed there in the 1928 Blue Book. The Building Department records do not include the permit application for this change in use and, presumably, accompanying remodeling.

As originally built, 282 Berkeley (29 Commonwealth) was a ten story building, surmounted with a high balustrade. By the late 1920s, an additional story had been constructed in place of the balustrade. Once again, the Building Department records omit any documents on this change. It is possible that the addition occurred much earlier, possibly not long after the building was built, inasmuch as the Bromley and Sanborn maps for the period between 1898 and 1938 show no change in the number of stories.

On December 10, 1934, Conveyancers Title Insurance and Mortgage Company foreclosed on its mortgage to the Berkeley Street Trust and transferred the building to its affiliate, Realty, Inc. Both companies subsequently went into receivership, and on October 16, 1942, George Alpert, the court-appointed receiver for Realty. Inc., transferred 282 Berkeley (29 Commonwealth) to the Conveyancers Realty Company. 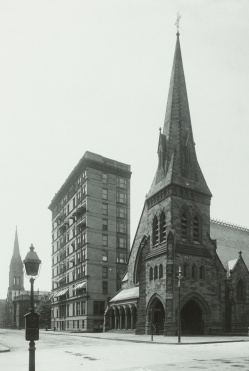 On February 24, 1965, 282 Berkeley (29 Commonwealth) was purchased from Frank Leeder and Harry Gorin by Howard N. Levin, trustee of The Kensington Trust. He continued to operate it as an office building.

Since 1928, Haddon Hall evolved from medical offices into a wider range of professional offices.

It remained an office building in 2017.

On January 4, 2017, 282 Berkeley (29 Commonwealth) was acquired from the 29 Commonwealth Limited Partnership by 29 Hexagon LLC (Sandra Edgerley, manager of record).

In August of 2017, 29 Hexagon LLC announced plans to convert 282 Berkeley from offices into an 800 member private club with dining, lodging rooms, and other amenities. The proposal met with significant opposition from neighboring residents, concerned about the impact on traffic, safety, and noise. In January of 2018, 29 Hexagon withdrew the proposal and announced plans to return the building to residential use. That same month, Hexagon Properties entered into a preliminary agreement to acquire the Algonquin Club at 217 Commonwealth, renovate the building, and continue its operation as a private club.

29 Hexigon LLC subsequently applied for (and received) permission to convert 282 Berkeley from an office building into nine residential units, with an automated parking system in the basement. 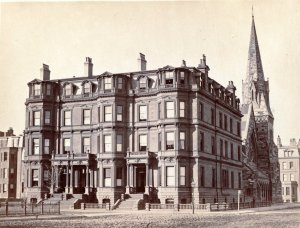 29 Commonwealth was built as the home of Joshua Stetson and his wife Ellen (Lamb) Treadwell Stetson. They previously had lived in Brookline. He purchased the land for 29 Commonwealth on June 3, 1863, from the Commonwealth of Massachusetts. 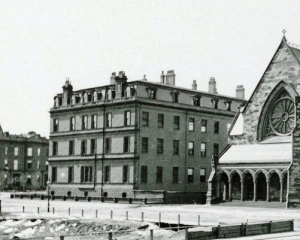 Click here for an index to the deeds for the original townhouse at 29 Commonwealth.

On July 16, 1869, 29 Commonwealth was purchased from Joshua Stetson by Elizabeth Brown (Francis) Bowditch, the widow of attorney Nathaniel Ingersoll Bowditch.

Elizabeth Bowditch made 29 Commonwealth her home. She previously had lived at 9 Pemberton Square. She also maintained a home in Brookline.

Elizabeth Bowditch died in January of 1892, and on May 10, 1893, it was offered for sale at public auction by the executors of her estate. William H. H. Newman was the successful bidder and took title to the property on May 19, 1893.

On April 26, 1894, the Boston Herald reported that William H. H. Newman planned to alter the existing building to convert it into an apartment house. “The top story will be removed and four additional stories built on, making the building seven stories high, and an addition, 24 by 32 feet in area, will be erected, also seven stories high. This addition will be constructed of brick and stone, to correspond with the old part.”