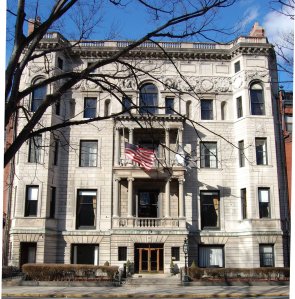 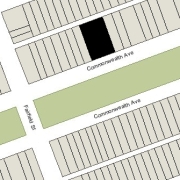 217 Commonwealth was designed by McKim, Mead, and White, architects, and built in 1887-1888 by Norcross Bros., builders, for the Algonquin Club.  The new clubhouse was officially dedicated on November 8, 1888.  The Club had been formed in October of 1885 and had been located temporarily at 164 Marlborough.

The clubhouse was built on a lot 82 feet wide composed of two lots, a 26 foot wide lot it purchased from Emily E. Sears on May 22, 1886, and a 56 foot wide lot purchased from Henry Lee on June 14. 1886. Emily Sears had acquired her lot on January 31, 1883, from James Lawrence, who had purchased it from the Commonwealth of Massachusetts on September 4, 1882. Henry Lee had acquired his lot directly from the Commonwealth on January 12, 1886.

Click here for an index to the deeds for 217 Commonwealth, and click here for further information about the land between the north side of Commonwealth and Alley 426, from Exeter to Fairfield. 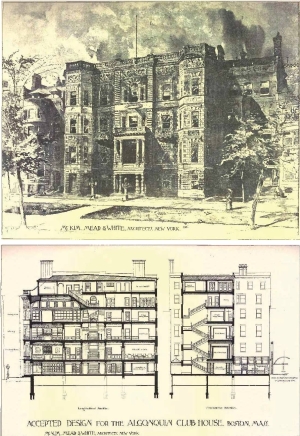 The Club solicited proposals for the new building from a number of architects, including several located in Boston.  However, when the members met on November 1, 1886, to choose the final design, they selected the plans submitted by McKim, Mead, and White of New York City.  The Boston Herald’s November 2, 1886, report on the decision commented that “the proposed Clubhouse is to be of brick and stone, a light limestone, technically known as Oolitic, from quarries in Rockfield, Ky., being recommended.  This is the stone used with such superb effect in the house of Cornelius Vanderbilt on Fifth Avenue, New York.  It is not unlike the unpolished Vermont marble in general appearance, when viewed from a distance, but it is a question whether it is sufficiently hard to withstand the rigors of the New England winter.  The questions of material, and also that of interior finish, are as yet undecided.”  The façade subsequently was constructed using Oolitic limestone, but from quarries in Indiana.

On November 7, 1886, the Boston Herald published McKim, Mead, and White’s drawings of the front elevation and plans for each floor.  On January 15, 1887, the American Architect and Building News published the same drawings plus longitudinal and transverse sections of the building.

The original design, as published in the Boston Herald and the American Architect and Building News, included bays flanking the front entrance, with a two-story central portico extending to the first floor. As built, however, the ground level story projected across the entire front of the building, connecting the area between the bays at the east and west ends of the building with the entrance, with a two-story portico structure above rising to the second floor. This design created a balcony enclosed with a balustrade accessible from the first floor reading room, across the center of the building between the two flanking bays. On November 9, 1888, the Boston Globe published drawings of the front elevation and the floor plans for the first, second, and third stories. 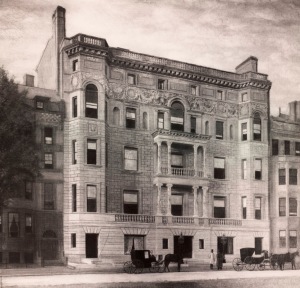 The final design violated the the restrictions contained in the deeds originally granted by the Commonwealth of Massachusetts, which required a twenty foot setback from Commonwealth Avenue, allowed only specified projections into that reserved area, and limited the width of bays which extended into the reserved area.  In September of 1887, the Harbor and Land Commission informed the Club of this violation, but the Club proceeded to complete the building without change.  In June of 1888, the Attorney General filed legal action to secure the Club’s compliance.

217 Commonwealth opened to members on November 5, 1888, and was formally dedicated on November 8, 1888. On November 6, 1888, the Boston Globe commented that “the Club, though a fashionable institution, is not an exclusive one, now numbers 750 members its limit; but it is thought that now that the new building, with its increased accommodations is completed, the constitutional bars will be let down and 400 or 500 more anxious applicants admitted.”  On November 9, 1888, the Globe reported that “not less than 2,000” men attended the opening reception the previous evening.

The Commonwealth proceeded with its litigation seeking the Club’s compliance with the deed restrictions. In a December 10, 1889, article commenting on the pending litigation, the Boston Globe observed that “the members of the club are much disturbed over this menace to their beautiful building…the remodeling…will not only cost considerable money, but will ruin the design.”

In April of 1891, the Supreme Judicial Court ordered that the building be remodeled to comply with the deed restrictions (Attorney General v. Algonquin Club; 153 Mass 447).  The front of the building was subsequently rebuilt accordingly. The remodeled design closely paralleled the originally accepted design, with two bays and a central entrance portico.

On September 15, 1898, the building was sold at auction to satisfy a $175,000 mortgage.  General Charles Henry Taylor, owner of the Boston Globe, was the successful bidder, acting on behalf of a syndicate of Club members. The Boston Daily Advertiser reported that the sale was to facilitate a financial reorganization of the club under which the second mortgage bond holders would receive 15 cents on the dollar. The Club was reorganized as “the New Algonquin Club,” which acquired the property on October 13, 1898, On November 17, 1898, the New Algonquin Club held its first annual meeting and elected Charles H. Taylor as president.

217 Commonwealth remained the Algonquin Club in 2017.

In January of 2018, the Algonquin Club’s executive committee voted to enter into an agreement to sell 217 Commonwealth to Hexagon Properties, which would renovate the building and continue to operate it as a private club.

In August of 2017, Hexagon Properties had proposed converting Haddon Hall at 282 Berkeley (29 Commonwealth) – originally an apartment building and more recently converted into offices – into a private club. The proposal had met with significant opposition from neighboring residents, and in January of 2018, Hexagon Properties withdrew the proposal and announced plans to return the building to residential use.

On February 27, 2018, the Algonquin Club members voted to ratify the agreement to sell 217 Commonwealth to Hexagon Properties. During 2018, Hexagon Properties applied for (and subsequently received) permission to continue operating 217 Commonwealth as a private club, including restoring the exterior façades, remodeling the interior to expand member facilities, and adding a roof deck.

On December 10, 2018, 217 Commonwealth was purchased from the Algonquin Club by 305 Hexagon LLC (Sandra Edgerley, manager of record). The deed included restrictions designed to address neighbors’ concerns about added traffic in the alley, smoking odors and noise from employees or members using the alley, and noise from the roof deck, including specifying that there would be “no music live, recorded or otherwise, or the use of any audio-visual equipment, including televisions, on the Roof Terrace.” 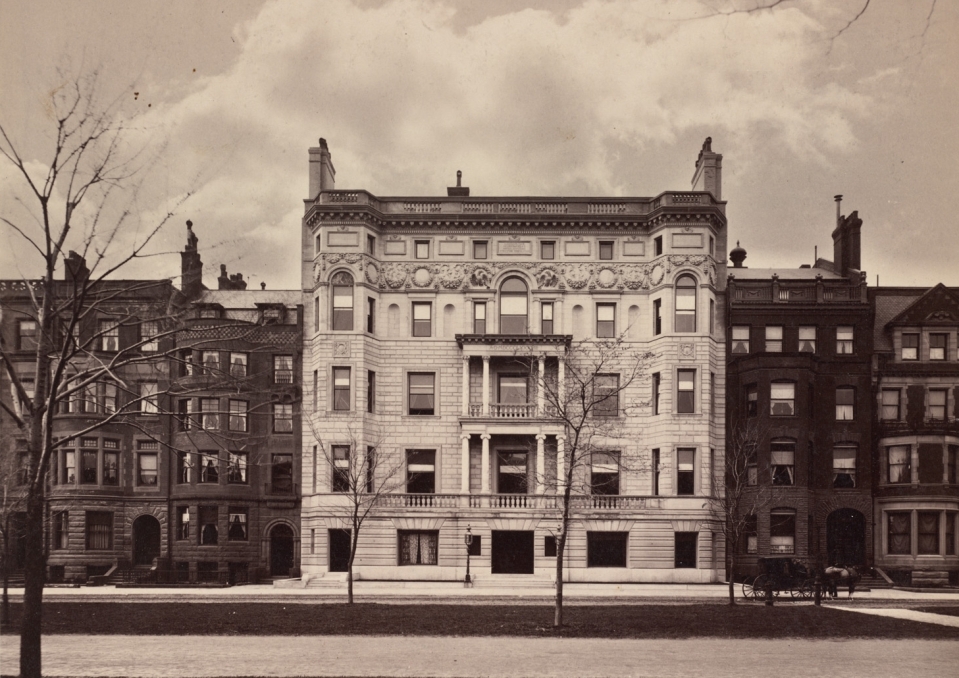