The western 44 foot lot was half of an 88 foot wide parcel that Frederick Pope and paper manufacturer John Dixwell Thompson had agreed to purchase jointly, 64 feet from Sidney Homer’s estate and 24 feet from Franklin Evans. On June 9, 1871, they agreed to divide the parcel, with Frederick Pope subsequently purchasing the eastern half from the Homer estate and J. Dixwell Thompson purchasing the western half from the Homer estate and Franklin Evans (301-303 Marlborough subsequently would be built on this land). J. Dixwell Thompson and his wife, Sally Phillips (Blagden) Thompson, lived at 287 Marlborough.

Click here for an index to the deeds for 295 Marlborough, and click here for further information about the land between the north side of Marlborough and Alley 416, from Fairfield to Gloucester.

On October 1, 1872, 295 Marlborough was purchased from Frederick Pope by Maria A. (Westcott) Sleeper, the wife of Jacob Henry Sleeper. They previously had lived in West Roxbury.

J. Henry Sleeper had served as a Major in the Civil War.  After the war, he entered his father’s real estate and clothing businesses.  By the 1870s, he was a hardware merchant.

During the 1876-1877 winter season, the Sleepers were living elsewhere, and 295 Marlborough was the home of Charles John Prince and his wife, Justine de Peyster (Cotton) Prince.  He was an oil dealer.  They previously had lived at the Hotel Vendome.  They had moved to 35 Mt. Vernon by December of 1877 when their son, Charles Barnard Prince, was born.

In about 1887, the Sleepers built a shingle-style home on Marblehead Neck, designed by architect Arthur Little.

Jacob Sleeper died in August of 1891.  Maria Sleeper continued to live at 295 Marlborough during the 1898-1899 winter season, but in July of 1899 purchased and subsequently moved to 336 Beacon.  On June 26, 1900, she transferred 295 Marlborough to her son, Jacob. He served in the US Diplomatic Corps and maintained his Boston residence at 336 Beacon with his mother. He leased 295 Marlborough to others.

By the 1899-1900 winter season, 295 Marlborough was the home of attorney Charles Armstrong Snow and his wife Fanny Devens (Sherburne) Snow.  They had married in January of 1899 and 295 Marlborough probably was their first home together.  Mrs. Frances Sherburne (Wallace) Richardson, Fanny Snow’s daughter by her previous marriage to William Wallace, lived with them.

They continued to live at 295 Marlborough during the 1910-1911 winter season, but moved thereafter to The Ericson at 373 Commonwealth.

On August 8, 1911, 295 Marlborough was purchased from Jacob Sleeper by Dr. John Lewis Bremer, Jr. He and his wife, Mary Cleveland (Bigelow) Bremer, made it their home. They previously had lived at 10 Fairfield.

John Lewis Bremer, Jr., was a physician and professor of histology at Harvard Medical School.

The Bremers continued to live at 295 Marlborough during the 1916-1917 winter season. In December of 1916, John Bremer’s mother, Mary Rice (Farnsworth) Bremer, the widow of John Lewis Bremer, died, and John and Mary Bremer moved to her former home at 416 Beacon.

On July 12, 1917, 295 Marlborough was purchased from J. Lewis Bremer by Elizabeth (Gardner) Amory, the widow of Charles Walter Amory.

By the 1919-1920 winter season, 295 Marlborough was the home of Olivia (Thorndike) Simpkins, the widow of Nathaniel Stone Simpkins, Jr., who had died in October of 1918, while serving in the US Army in France. She also maintained a home in Beverly Farms, which had been their primary residence before his death.

Olivia Simpkins initially leased 295 Marlborough from Elizabeth Amory, and then purchased the house from her on February 19, 1924.

Olivia Simpkins continued to live at 295 Marlborough until her death in December of 1959.

On September 12, 1960, 295 Marlborough was acquired from Olivia Simpkins’s estate by Jordan M. Whitelaw, producer of the radio and television broadcasts of the Boston Symphony Orchestra.

He converted the property into three apartments and made one of them his home. He was unmarried.

He continued to live at 295 Marlborough until his death in February of 1982.

On April 9, 1984, she converted the property into three condominium units, the 295 Marlborough Street Condominium. She sold the units and they subsequently changed hands.

On May 26, 2006, Unit 1 was purchased by Guy J. Buckle. He and his wife, Martha Murray Buckle, subsequently purchased Unit 2 in December of 2013, and Unit 1 in February of 2019.  On February 22, 2019, they removed the condominium status for the building, returning it to a three-family dwelling.

295 Marlborough was assessed as a three-family dwelling in 2021. 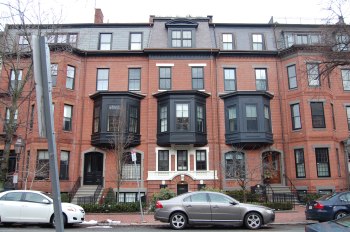