As originally built, 231 Commonwealth and 233 Commonwealth were of similar design, both with four stories and a basement, with brownstone façades at the basement and first story levels and red brick above.  In 1937, 233 Commonwealth was remodeled to create a fifth story and replace the red brick façade with yellow brick.

The land for 233 Commonwealth was part of a larger parcel on which 233-235-239 Commonwealth subsequently were built. It was originally purchased from the Boston Water Power Company on February 16, 1863, by Daniel Davies, Jarvis Dwight Braman, and Grenville Temple Winthrop Braman. Grenville Braman was treasurer of the Boston Water Power Company, Jarvis Braman was his brother (and later president of the company), and Daniel Davies, a housewright and master carpenter, was Grenville Braman’s father-in-law.

By the 1887-1888 winter season, William Rogers had made 233 Commonwealth his home, and on February 1, 1888, he purchased the property from his brother. He previously had lived 205 Beacon. He was a widower, his wife, Mary Ingersoll (Bowditch) Rogers, having died in September of 1874 in Funchal on the Island of Madeira, following the birth of their son, William Bowditch Rogers.

William Rogers had been a shipping merchant in the East India trade prior to the Civil War. In 1861, soon after the commencement of the war, he enlisted in the US Navy and served as an officer until July of 1866. After the war, he did not resume his shipping business. By the 1880s, he was a banker, probably in association with his brother, Jacob Rogers, who was Boston agent for J. S. Morgan & Co. of London.

In early 1888, William C. Rogers and his son traveled to London.  William Rogers died there in July of 1888. 233 Commonwealth was inherited by his son. He was still a minor and Jacob Rogers was named his guardian.

On May 20, 1889, 233 Commonwealth was purchased from Jacob Rogers, as William Bowditch Rogers’s guardian, by Charles Healy Ditson. He lived in New York City, where he was a music publisher. He married there in October of 1890 to Alice M. Tappin.

233 Commonwealth became the home of his mother, Catherine (Delano) Ditson, the widow of music store owner and music publisher Oliver Ditson. Prior to her husband’s death in December of 1888, they had lived at 8 East Brookline. Their daughter, Mary Frances (Ditson) Porter, the widow of lawyer Burr Porter, lived with her.

Catherine Ditson continued to live at 233 Commonwealth until her death in August of 1899.  After her death, it continued to be Mary Porter’s home.

By the 1903-1904 winter season, Mary Porter had been joined there by Miss Laliah Burpee Pingree, who continued to live there until her death in October of 1906.

William Morgan Butler was a former lawyer and state legislator. He had retired from legal practice in 1912 and became a cotton manufacturer. In 1924, he served as Chairman of the Republican National Committee, and in November of that year, was appointed to the US Senate to fill the vacancy left by the death of Henry Cabot Lodge. He lost his bid for election to the office in 1926, and lost a second attempt for election to the US Senate in 1930.

On March 31, 1931, 233 Commonwealth was acquired from Mary Butler by Edmund B. Snow, vice-president of the Ellis Title and Conveyancing Co. He lived in Allston.

On December 28, 1933, the Massachusetts Hospital Life Insurance Company foreclosed on its mortgage to Henry C. Brookings, which had been assumed by Mary Butler and then by Edmund Snow, and took possession of 233 Commonwealth.

The house continued to be shown as vacant in the 1934-1938 City Directories. 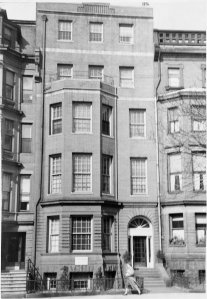 On July 9, 1937, 233 Commonwealth was acquired by Sadie (Sarah) Elizabeth (Klayman) Green, the wife of Morris Green, of Dorchester. He was a contractor and she was treasurer of the Reliable Dress Shop in South Boston.

That same month, she applied for (and subsequently received) permission to convert the property from a single-family dwelling into twelve apartments, including creating a fifth floor and rebuilding the brick portion of the front façade, using red brick.  The remodeling was designed by architect Henry W. Gore, Jr., and constructed by Sadie Green’s husband, Morris Green, and Barnard Meshon, also a contractor. Plans for the remodeling — including elevations and floor plans — are included in the City of Boston Blueprints Collection in the Boston City Archives (reference BIN R-2).

As constructed, the façade was made of yellow brick, rather than the approved red brick, and a complaint was filed by the Park Department. An agreement was reached that the brick would be painted red, with the joints between the bricks left natural or painted a dark grey to contrast with the brick. In June of 1938, the Park Department filed another letter of complaint, noting that the entire façade (bricks and joints) had been painted red, and not in the color of red that had been stipulated in the agreement. The work was subsequently redone.  By the mid-1990s the façade was painted battleship gray. In January of 1997, the Back Bay Architectural Commission denied an application to repaint the façade and encouraged the applicant to remove the paint and restore the yellow brick, which subsequently was done.

On December 30, 1938, Israel M. Levin foreclosed on a mortgage given by Sadie Green and sold 233 Commonwealth to James F. O’Brien, Jr.

On January 20, 1939, 233 Commonwealth was acquired from James O’Brien, Jr., by Sadie Green’s father, Myer Klayman (Clayman), and on June 29, 1939, it was acquired from him by the Park View Realty Corporation. Sadie Green’s step-son, William Green, was president and treasurer of Park View Realty (and also president of the Reliable Dress Shop). He was the son of Morris Green and his first wife, Minnie (Hirshhorn) Green.

On November 24, 1975, 233 Commonwealth was purchased from Lenk Properties by Betty Bishop and Albert Kasarjian.

On May 14, 1976, they converted the property into twelve condominium units, the 233 Commonwealth Avenue Condominium.