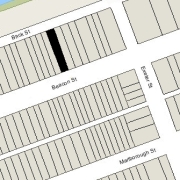 298 Beacon is located on the north side of Beacon, between Exeter and Fairfield, with 296 Beacon to the east and 300 Beacon to the west.

298 Beacon was built in1871-1872 by Bourn & Leavitt, a partnership of carpenters Robert Tower Bourn (Bourne) and William Leavitt, on land they purchased on December 29, 1871, from the Boston and Roxbury Mill Corporation. Bourn & Levitt filed a Notice of Intention to Build with the Board of Street Commissioners in April of 1871 (reported in the Boston Herald on April 11, 1871).

Click here for an index to the deeds for 298 Beacon, and click here for further information on the land on the north side of Beacon, including the Storrow Memorial Embankment on the Esplanade.

On September 1, 1877, 298 Beacon was purchased from Robert Bourn and William Leavitt by Rebecca Pearce Allyn, the widow of Rufus Bradford Allyn. She lived in Cambridge.

On May 25, 1878, 298 Beacon was purchased from Rebecca Allyn by Roxana (Stackpole) Dabney, the widow of Frederic Dabney. She lived at 411 Beacon.

298 Beacon became the home of her son and daughter-in-law, attorney Lewis Stackpole Dabney and Clara (Bigelow) Dabney. They previously had lived at 131 Mt. Vernon.

The Dabneys also maintained a home at Burgess Point in Wareham.

Clara Dabney died in October of 1899. Lewis Dabney continued to live at 298 Beacon with their children.

Frederick Dabney, a stockbroker, married in April of 1900 to Elizabeth Elliot Fay.  After their marriage, they moved to 199 Bay State Road.

Caroline Dabney married in November of 1906 to Augustin Hamilton Parker, a banker and broker.  After their marriage, they lived with her father at 298 Beacon, but moved soon thereafter to Dover.

George Dabney, a lawyer, continued to live at 298 Beacon with his father.

On October 13, 1908, 298 Beacon was acquired from Lewis Dabney’s estate by Frederick and Elizabeth (Fay) Dabney, who moved there from 199 Bay State Road. George Dabney continued to live there with them.

On November 22, 1929, 298 Beacon was acquired from Ray C. Johnson by Miss Adelaide L. Schulz of Dedham, and on November 25, 1929, she transferred it to her brother, attorney Robert Hermann Otto Schulz, as trustee under the will of his first wife, Louise Nanette (Schrafft) Schulz, who had died in May of 1924.

298 Beacon became the home of Robert Schulz and his second wife, Helen Louise Hendrick (Clay) Hartford Schulz. They also maintained a homes in Dedham and in Squam Lake, New Hampshire.

Robert and Helen Schulz continued to live 298 Beacon until the early 1940s.

On September 18, 1941, 298 Beacon was acquired from the Schulz trust by real estate dealer Henry J. O’Meara.

On November 12, 1941, it was acquired from him by Mrs. Donelda (Donalda) A. (Myette) O’Connor Bacon (called Donalda O’Connor), the former wife of Jeremiah Joseph O’Connor and of George Bacon.  Her daughter, Violet (O’Connor) Andrew, the former wife of John Andrew, Jr., lived with her.  They previously had lived in Providence where she had operated a lodging house.

In January of 1942, she filed for (and subsequently received) permission to convert the property from a single-family dwelling into a lodging house.  Soon thereafter, she moved back to Providence and resumed operating a lodging house there.  In September of 1948, she was murdered by one of her lodgers who had become infatuated with her.

On November 2, 1942, 298 Beacon was purchased from Donelda O’Connor by Charles Elliot Worden, Sr., a real estate broker and justice of the peace, and his wife, Effie (Dilworth) Vincent Worden. They previously had lived at 1751 Washington.  In February of 1947, he applied for (and subsequently received) permission to add a second story to an existing one-story ell at the rear of the property.  The property remained a lodging house.

On July 23, 1954, 298 Beacon was acquired from the Wordens by Aldo Americo Croattii and his wife, Marie I. (Di Filipi) Croatti. Aldo Croatti owned and operated a uniform supply company. They lived in West Roxbury. 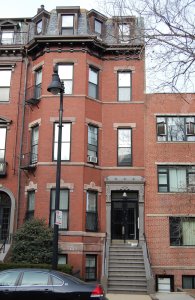 On August 6, 1974, she was cited by the Building Department for failing to change the legal occupancy from a lodging house to eight apartments, a condition which the Assessing Department indicated had existed since at least 1955.

On July 15, 1974, 298 Beacon was acquired from Santa Fruggiero by Michael Joseph Callahan and his wife, Frances Madeline (Little) Callahan. They lived at 23 Southmere Road in Mattapan.  In October of 1974, he filed for (and subsequently received) permission to legalize the occupancy as eight apartments.  The Callahans subsequently moved to one of the apartments.

298 Beacon remained an apartment building, owned by the Michael Callahan estate, in 2014.

On March 26, 2014, the building was severely damaged by a fire caused from welding at 296 Beacon.  Two Boston firefighters were killed and several others injured.

In December of 2014, 298 Hexagon LLC filed for (and subsequently received) permission to repair the fire damage, including changing the occupancy from eight apartments to four apartments, adding a penthouse, roof deck, and garage. The remodeling was designed by Grassi Design Group, Inc.