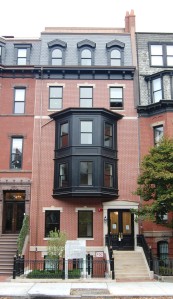 296 Beacon is located on the north side of Beacon, between Exeter and Fairfield, with 294 Beacon to the east and 298 Beacon to the west.

Click here for an index to the deeds for 296 Beacon, and click here for further information on the land on the north side of Beacon, including the Storrow Memorial Embankment on the Esplanade.

The apartment house at 296 Beacon demolished in 2015 was designed by architects Herman L. Feer and William E. Nast, and built in 1951 as a seven unit apartment building for the Thomas & Eliot Investment Corporation (Thomas Spiro, president). 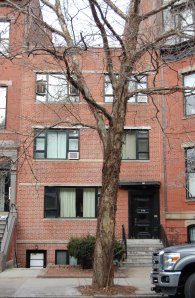 Architectural plans for the building — including front and rear elevations, floor plans, floor framing plans, and a plot plan — are included in the City of Boston Blueprints Collection in the Boston City Archives (reference BIN R-124).

Thomas Spiro acquired the original townhouse at 296 Beacon on April 30, 1951. He transferred the property to his firm, Thomas & Eliot Investment Corporation, on May 17, 1951. The townhouse was razed soon thereafter,

On March 22, 1976, 296 Beacon was acquired from the Thomas & Eliot Investment Corporation by real estate dealer George P. Demeter. On February 1, 1996, he transferred the property to his affiliated company, the Oliver Realty Limited Partnership. It remained an apartment building.

In October of 2014, the Oliver Realty LP filed for (and subsequently received) permission to demolish the existing building at 296 Beacon and replace it with a new six story building with nine apartments. Demolition of the building was completed in the fall of 2015.

When it was built in 1951, 296 Beacon replaced an earlier townhouse at the same address.

The original townhouse at 296 Beacon was built in 1870-1871 for Dr. Oliver Wendell Holmes and his wife, Amelia Lee (Jackson) Holmes. They previously had lived at 164 Charles.

Amelia Lee Holmes purchased the land for 296 Beacon on October 11, 1870, from the Boston and Roxbury Mill Corporation. On June 23, 1871, after the house was built, she transferred the property to a trust established for her benefit under her father’s will, with her husband and her brother-in-law, John Torrey Morse (married to her sister, Lucy) as trustees.

Oliver Wendell Holmes was a physician and professor of anatomy and physiology at Harvard Medical School.  He was a prolific and internationally recognized poet, essayist, dramatist, and novelist, best known for his Autocrat at the Breakfast Table.

Amelia Holmes married in May of 1871 to Turner Sargent (born John Turner Welles Sargent), a clergyman, and they moved to 59 Beacon.

Edward Jackson Holmes married in October of 1871 to Henrietta Goddard Wigglesworth and they moved to 85 Marlborough.  He was a lawyer and between 1869 and 1871 had served as private secretary to US Senator Charles Sumner. He died in July of 1884.

Oliver Wendell Holmes, Jr., married in June of 1872 to Fannie Bowditch Dixwell and they moved to 10 Beacon. He was a lawyer and later would served as Chief Justice of the Massachusetts Supreme Judicial Court and then as a Justice of the US Supreme Court. 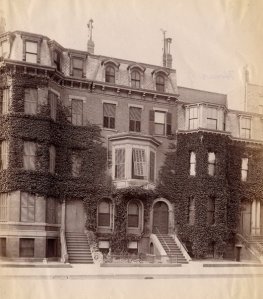 Amelia Sargent moved back to 296 Beacon during the 1887-1888 winter season; her husband, Turner Sargent, had died in February of 1877 and she had continued to live at 59 Beacon until she moved back with her parents.

By the 1889-1890 winter season, Dr. Holmes had been joined at 296 Beacon by his son and daughter-in-law, Oliver Wendell Holmes, Jr., and Fannie Holmes. They previously had lived at 9 Chestnut. He had been appointed to the Massachusetts Supreme Judicial Court in December of 1882.

Oliver Wendell Holmes, Jr., as successor trustee under his mother’s will, transferred his deceased sister’s one-half interest in 296 Beacon to a trust which his sister had established in her own will, with himself and his nephew, Edward Jackson Holmes, Jr., as trustees. He continued to own the other one-half interest in the property in his own name.

Oliver and Fannie Holmes continued to live at 296 Beacon. In 1899, he was named Chief Justice of the Massachusetts Supreme Judicial Court, and in 1902 he was appointed to the US Supreme Court by President Theodore Roosevelt. After his appointment, they moved to Washington DC.

By the 1903-1904 winter season, 296 Beacon had become the home of Edward Jackson Holmes, Jr., an attorney, and his wife, Mary Stacy (Beaman) Holmes. They previously had lived at 245 Beacon.  They also maintained a home in Manchester. On August 7, 1909, he acquired 296 Beacon from his uncle and from the trust established under his aunt’s will. 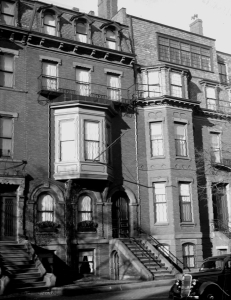 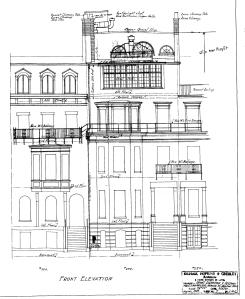 In July of 1930, Edward Holmes purchased 294 Beacon. In April of 1930, prior to taking title, he filed for (and subsequently received) permission to combine the two houses into one property, as a two-family dwelling with one family in each of the former separate houses. The remodeling was designed by architects Kilham, Hopkins, and Greeley.

Plans for the remodeling — including elevations, floor plans, and framing plans — are included in the City of Boston Blueprints Collection in the Boston City Archives (reference BIN B-9).

Edward and Mary Holmes lived at 296 Beacon and appear to have leased 294 Beacon to others.

Edward and Mary Holmes continued to live at 296 Beacon until about 1941.  In August of 1941, he filed for (and subsequently received) permission to separate 294 and 296 Beacon into two houses, with each remaining a single-family dwelling.  The decision to separate the houses appears to have coincided with the Holmeses’ decision to move from 296 Beacon, which was shown as vacant in the 1942-1946 City Directories.  By 1945, the Holmeses were living in Topsfield.

On August 18, 1945, 296 Beacon was purchased from Edward Holmes by Harold W. Pierce, an investment broker. It appears to have remained vacant.

296 Beacon was demolished in 1945.  A September 30, 1945, advertisement in the Boston Globe by the Central Building Wrecking Company advertised “296 Beacon St. Boston For Sale on Premises: Oak, Maple and Parquet flooring, beautiful paneling and bookcases, select stair railings and balustrades, doors, windows, furnace and piping, and other building materials of every description.”