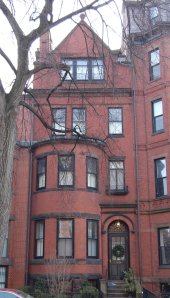 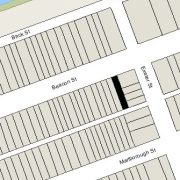 301 Beacon is located on the south side of Beacon, between Exeter and Fairfield, with 299 Beacon to the east and 303 Beacon to the west.

301 Beacon was designed by Sturgis and Brigham, architects, and built in 1883 by Weston and Shepard, masons, for George Edward Niles and his wife, Mary (Adams) Niles. They previously had lived at 123 Charles. He is shown as the owner on the original building permit application, dated May 21, 1883.

When he purchased the land at 301 Beacon, George W. Simmons probably assumed that the party wall of the house to the west, at 303 Beacon, would be built straddling the western boundary between 301 and 303 Beacon, and that the eastern half of the wall would be available for any house constructed at 301 Beacon. The land to the west was purchased by Frederick B. Pope from the Commonwealth on May 5, 1871. When he built 303 Beacon ca. 1871, he placed the eastern wall one foot further to the west than the boundary line between 301 Beacon and 303 Beacon. He then sold the one foot strip to George W. Pratt on May 9, 1871, but retained the right to be compensated for the use of the eastern half of the party wall on the land when it was used for a house at 301 Beacon. On June 12, 1871, George Wheatland, Jr., purchased the one foot strip of land.

George W. Simmons left the land at 301 Beacon vacant. He died while a resident of 299 Beacon in December of 1882 and his heirs subsequently sold the land to George Niles, who built his home there.

Click here for an index to the deeds for 301 Beacon, and click here for further information about the land between the south side of Beacon and Alley 417, from Exeter to Fairfield.

George Niles was a painter and lithographer.  He maintained his studios on School Street and in Jackson, New Hampshire, where he exhibited his work and the works of other artists.

By the 1902-1903 winter season, 301 Beacon was the home of James Torrey Howe and his wife, Mary Cleves (Talbot) Howe.  James Howe was in the grain business in Chicago and previously had developed mines in Wisconsin.  The Howes probably were living in Boston while their son, Talbot Howe, attended the Volkmann School and then entered Harvard with the Class of 1908 (he withdrew in his sophomore year).  James and Mary Howe continued to live at 301 Beacon during the 1903-1904 season.

During the 1904-1905 winter season, it was the home of attorney Charles Benjamin Barnes, Jr., and his wife, Josephine Lea (Low) Barnes.  In December of 1903, when their daughter Clara was born, they were living at 255 Newbury.  They also maintained a home in Hingham. They previously had lived in Washington DC. They had moved to 3 Exeter by the 1906-1907 season. 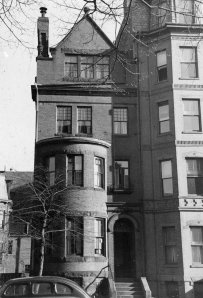 On July 29, 1907, 301 Beacon was purchased from Mary Niles by Dr. Hugh Williams, a surgeon, as his home and medical office. He previously had lived and maintained his office at 267 Beacon.

From 1908 until 1916, Dr. Williams was joined at 301 Beacon by Frederic Sprague Goodwin, a lawyer, who had lived at 267 Beacon with him.  Frederic Goodwin moved to 135 Beacon after his marriage in September of 1916 to Juliet Borland Higginson.

Hugh Williams continued to live at 301 Beacon until his death in February of 1945. He was unmarried and left 301 Beacon to the Massachusetts General Hospital.

By 1946, 301 Beacon was the home of Dr. Thomas Stewart Hamilton and his wife, Amy (Washburn) Hamilton.  He was assistant director of Massachusetts General Hospital.  Soon thereafter, he became director of Newton-Wellesley Hospital and they moved to Newton Lower Falls.

Between 1947 and about 1949, 301 Beacon also was the residence of Constantine Triantaphyllakos, the Greek Consul in Boston.

By 1950, 301 Beacon was the home of Dr. Ellsworth Traver Neumann, the Administrator of Massachusetts General Hospital, and his wife, Elaine M. (Biesterfeld) Neumann.  They previously had lived in New York.  Elaine Neumann died in February of 1970 and he married again in August of 1970 to Virginia (Schlicht) Lawrence, the widow of Wallace C. Lawrence. She had been director of the Department of Clinical Administration at Massachusetts General Hospital. They continued to live at 301 Beacon until mid-1973, when he was named vice president for administration of the Rockefeller Foundation and they moved to New York City.

On August 30, 1973, 301 Beacon was acquired from Massachusetts General Hospital by David Hoadley Thorne and his wife, Rose (Geer) Thorne.  David Thorne was a political and communications consultant, and later a real estate investor, publisher, and financial services executive.  In 2009, he was named Ambassador to Italy and San Marino, and in 2013 he became senior advisor to US Secretary of State John Kerry (John Kerry and David Thorne were roommates at Yale and they co-authored The New Soldier in 1971; John Kerry’s first wife was David Thorne’s twin sister, Julia).

On December 23, 1986, 301 Beacon was purchased from the Thornes by Thomas J. Vallely and his wife, Victoria B. Vallely. A long-time political advisor to John Kerry, Thomas Vallely was completing his third term as a State Representative and soon would become director of the Vietnam Program at the Harvard Kennedy School.  In May of 2003, the Vallelys applied for (and subsequently received) permission to convert the house from a single-family dwelling into a two-family dwelling.

301 Beacon subsequently changed hands.  It remained a two-family dwelling in 2016.