305 Beacon is located on the south side of Beacon, between Exeter and Fairfield, with 303 Beacon to the east and 307 Beacon to the west.

Frederick Pope purchased the land for 303-305-307-309 Beacon on May 31, 1871, from the Commonwealth of Massachusetts. The original parcel was 75 feet wide, and the total frontage of the four houses was 74 feet. Frederick Pope sold the remaining one foot strip, on the east end of the parcel, in May of 1871 and it subsequently was combined with the lot further east on which 301 Beacon was built.

Click here for an index to the deeds for 305 Beacon, and click here for further information about the land between the south side of Beacon and Alley 417, from Exeter to Fairfield.

On September 27, 1871, 305 Beacon was purchased from Frederick Pope by Daniel Haridon Lane, a merchant tailor. He and his wife, Susan M. (Winn) Lane, made it their home. They had married in January of 1871 and 305 Beacon probably was their first home together. In 1870, prior to their marriage, he had lived at 13 Allston as a lodger with Chapman Seabury, owner of Seabury Brothers fancy goods store.

The Lanes continued to live at 305 Beacon during the 1880-1881 winter season, but moved thereafter to a new home they had built at 291 Beacon.

On June 25, 1881, 305 Beacon was purchased from Daniel Lane by William Augustus Rust. He and his wife, Nancy Elwell (Davison) Rust, made it their home. They previously had lived at 313 Beacon.

William Rust was a wholesale shoe and boot dealer and president of the Freeman’s National Bank.

Nancy Rust died in November of 1902.  William Rust continued to live at 305 Beacon during the 1904-1905 winter season, but moved thereafter to the Hotel Vendome.

On April 27, 1905, 305 Beacon was purchased from William Rust by Mabel Delano (Clapp) Lord, the wife of Dr. Frederick Taylor Lord. They previously had lived in an apartment at the Hotel Royal at 295-297 Beacon.

Frederick Lord was a physician specializing in diseases of the lung, and Mabel Lord was a leader in advocating public health planning in Boston. 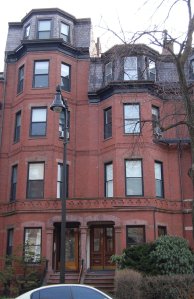 On April 1, 1929, Mabel Lord transferred the property into her husband’s name.

On April 16, 1942, 305 Beacon was acquired from Frederick Lord’s estate by William Faxon Otis and his wife, Eleanor (Hannon) Otis. They previously had lived at 44 Gloucester.

William Otis was an insurance and real estate agent.  In the 1960s, he served as a member of the Massachusetts House of Representatives.  Eleanor Otis served as Executive Director of the Boston office of Alcoholics Anonymous from 1949 to 1959.

In January of 1962, William Otis applied for (and subsequently received) permission to convert the property from a single-family dwelling into four apartments.  He subsequently occupied the unit on the lower two floors.

On October 20, 1968, William and Chrystene Otis were murdered at 305 Beacon by an intruder whom they encountered in the kitchen in the process of robbing their home.

On April 15, 1971, 305 Beacon was purchased from William Otis’s estate by Christopher C. Mitchell and his wife, Maureen C. (Buchanan) Mitchell. He was a funeral director with Tobin Funeral Services at 666 Massachusetts Avenue. They lived in one of the apartments. They previously had lived in an apartment at 145 Pinckney.

On April 15, 1971, the Mitchells transferred 305 Beacon to G & M Associates, Inc., of which Maureen Mitchell was the president and treasurer.

Christopher Mitchell died in December of 1974. Maureen Mitchell continued to live at 305 Beacon and to operate the Tobin Funeral Service.

305 Beacon continued to be assessed as a four- to six-family dwelling in 2021.