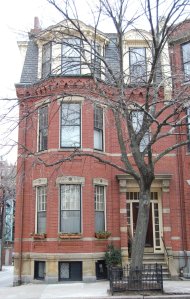 31 Hereford is located on the west side of Hereford, between Marlborough and Commonwealth, with 29 Hereford to the north and 311 Commonwealth to the south, across Alley 429.

31 Hereford was designed by Alfred S. Bither, architect, and built in 1879 by Goldthwait & Chapin, masons, for building contractor Samuel Tarbell Ames, one of four contiguous houses (364 Marlborough and 27-29-31 Hereford). He is shown as the owner on the original building permit application, dated March 27, 1879. Samuel Ames built the houses for wire and cable manufacturer Charles Anthony Morss, for speculative sale. He and his wife, Mary Elizabeth (Wells) Morss, lived at 323 Marlborough.

In his Houses of Boston’s Back Bay, Bainbridge Bunting attributes 364 Marlborough, 27-29-31 Hereford, 435 Beacon, 7-9-11 Hereford, and 216-218 Commonwealth – all built in 1879 – to R. S. Bither.  This is a misreading of the handwriting on the permit applications.  It is clearly written as “A. S. Bither” on several of the permit applications, and is less legible on several others. There was no R. S. Bither listed in the Boston City Directories at any time in the 1870s or 1880s, whereas Alfred S. Bither was a practicing architect there from 1870 to 1880.

The permit applications for 364 Marlborough and 27-29-31 Hereford indicate that they were all the same height, and on April 12, 1879, a Boston Journal article commented that “on Hereford street, near Marlboro’, Goldthwaite & Chapin are building for Samuel T. Ames, the owner, three houses, 22 by 44 feet, two stories, with Mansard roof, of brick with freestone trimmings, and the same builders are erecting for Mr. Ames, at the corner of Marlboro’ and Hereford streets, one dwelling house, 36 by 44 feet, two stories, Mansard roof, the material of which is brick with stone  trimmings.”  A additional story was added to 364 Marlborough ca. 1889.

Charles Morss purchased the land for 364 Marlborough and 27-29-31 Hereford on March 6, 1879, from Grenville T. W. Braman, Henry D. Hyde, and Henry M. Whitney, trustees of a real estate investment trust that had purchased several parcels of land on March 1, 1872, from the Boston Water Power Company.

After the houses were completed, Charles Morss sold them to individual purchasers. In the deeds for 27-29-31 Hereford, he included an easement establishing a three foot six inch wide passageway across the rear of 29-31 Hereford to provide access to the alley for all three houses.

Click here for an index to the deeds for 31 Hereford, and click here for further information on the land on the south side of Marlborough between Hereford and Massachusetts Avenue.

On November 8, 1879, 31 Hereford was purchased from Samuel H. Whitwell by Susan M. (Merriam) Barrett, the wife of George C. Barrett. He was a merchant. They lived at the Commonwealth Hotel at 1697 Washington and then at the Hotel Vendome. They do not appear to have occupied 31 Hereford.

On January 10, 1880, 31 Hereford was acquired from Susan Barrett by Russell Sturgis, III. He married in March of 1880 to Anne Outram Bangs and they made 31 Hereford their home. At that time, he was a medical student; he subsequently became a physician.

They lived at 31 Hereford through the 1881-1882 winter season and then moved to a new home they had built at 190 Marlborough.

On June 29, 1882, 31 Hereford was purchased from Russell Sturgis, III, by Elizabeth Searle (Davis) Sprague, the wife of boot and shoe dealer Edwin Loring Sprague. They had married in April of 1881 and had lived briefly at 74 Chestnut. Prior to their marriage, he had lived with his brother, Henry, at 19 Mt. Vernon.

During their ownership of 31 Hereford, the Spragues commissioned Peabody and Stearns to remodel the first floor, including the addition of a bay window inset into the alley façade for a sitting room on the first floor, located between the front parlor and the dining room in the rear. Plans for the remodeling are included in the Peabody and Stearns Collection in the Boston Public Library’s Arts Department (reference PS/MA.143). The plans are undated and it is unclear whether the work was ever done; if it was, the window was subsequently altered to be two separate windows.

The Spragues continued to live at 31 Hereford during the 1895-1896 winter season, but moved thereafter to 4 Brimmer. In January of 1899, they purchased and subsequently moved to 431 Marlborough.

On March 26, 1896, 31 Hereford was purchased from Elizabeth Sprague by Hannah Brown (Wattson) Merrill, the widow of Joseph Warren Merrill, and their daughter, Lillie Edith Merrill. They previously had lived in Manchester, Massachusetts, where they continued to maintain a home.

Lillie Edith Merrilll married in September of 1896 to Rev. Wilford L. Hoopes. He was assistant rector of Emmanuel Church at 15 Newbury. After their marriage, they lived at 31 Hereford with Hannah Merrill.

They continued to live at 31 Hereford during the 1897-1898 winter season, but moved thereafter to Providence, where Wilford Hoopes became rector of Calvary Church. He resigned in 1902 and by 1904 he and his wife and Hannah Merrill were living in Cambridge. Hannah Merrill and Lillie Edith Hoopes continued to own 31 Hereford and lease it to others.

By the 1898-1899 winter season, 31 Hereford was the home of attorney Charles Edward Hellier and his wife, Mary (Harmon) Hellier. They previously had lived at in an apartment at 373 Commonwealth. They continued to live at 31 Hereford during the 1905-1906 season, but moved thereafter 105 Beacon.

By the 1906-1907 winter season, 31 Hereford was the home of wool merchant Conrad Hobbs and his wife, Jessie (Langmaid) Hobbs. They had married in November of 1906 and 31 Hereford probably was their first home together. Prior to their marriage, he had lived at 313 Commonwealth with his parents, Warren D. Hobbs and Annie F. (Kettell) Hobbs. 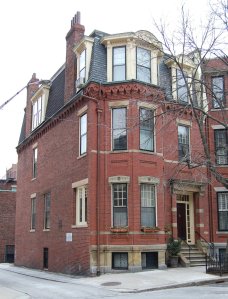 They continued to live at 31 Hereford during the 1907-1908 season, but moved thereafter to 318 Commonwealth.

Hannah Merrill died in January of 1908 and, in August of 1908, 31 Hereford was purchased from her estate and from Lillie Edith Hoopes by Susan (Emmons) Garfield, the wife of Irvin McDowell Garfield. They lived in an apartment at 409 Marlborough.

Ruth Crossett married in October of 1908 to T. Russell Appleton and they made 31 Hereford their home. Prior to their marriage, he had lived at 52 Townsend in Roxbury with his parents, Thomas R. Appleton and Anna (Estes) Appleton.

Russell Appleton was employed with a shoe manufacturing company, probably the firm owned by his father-in-law, Lewis Abbott Crossett.

On September 16, 1911, 31 Hereford was purchased from Lewis Crossett and Ruth (Crossett) Appleton by wholesale lumber merchant George Howe Davenport. He and his wife, Camilla H. (Chace) Davenport, lived at 460 Beacon.

By the 1911-1912 winter season, it was the home of the Davenports’ son-in-law and daughter, architect William Truman Aldrich and Dorothea (Davenport) Aldrich. They also maintained a home in Marblehead. They had married in March of 1910 and were living in New York City in April of 1910, at the time of the 1910 US Census.  William Aldrich’s partner, Robert Peabody Bellows, lived at 29 Hereford.

The Aldriches continued to live at 31 Hereford during the 1918-1919 winter season, but moved thereafter to 263 Clarendon. George Davenport continued to own 31 Hereford and lease it to others.

By the 1919-1920 winter season, 31 Hereford was the home of four teenaged sisters: Katherine Lyman Thomas, Alice Lee Whitridge Thomas, Rosamond Whitridge Thomas, and Elizabeth C. Thomas.  They were the daughters of architect Douglas Hamilton Thomas and his wife Bessie Lyman (Chadwick) Thomas.  Living with them at the time of the 1920 US Census was Miss Alice B. Gilmore, whose occupation was shown as “chaperone.”

On June 8, 1922, 31 Hereford was purchased from George Davenport by Franklin Haven Clark, an investment banker. He and his wife, Frances (Sturgis) Clark, made it their home. They previously had lived in Brookline. They also maintained a home in Nahant.

They continued to live at 31 Hereford during the 1925-1926 winter season, but moved thereafter to 9 Gloucester.

On October 17, 1927, 31 Hereford was acquired from F. Haven Clark by Elma L. (Joffrion) Maxwell, the wife of Frank Rollins Maxwell, Jr. They previously had lived in Dedham. He was a salesman with the Thomas G. Plant Company, shoe manufacturers in Roxbury.

By 1929, they were joined at 31 Hereford by his father, Frank R. Maxwell, Sr., who was vice president and later would become president of the Thomas G. Plant Co.  His wife, Ella (Wickes) Maxwell, had died in 1928.  Before her death, they lived in an apartment at 137 Marlborough.  He had moved to Brookline by 1930.

By October of 1929, Frank Maxwell was vice-president of operations for the Cirrus Corporation, manufacturers of airplane motors, and by the time of the 1930 US Census, he was living in St. Clair, Michigan. Elma Maxwell was not enumerated in the Census with him.

On June 1, 1931, 31 Hereford was purchased from Elma Maxwell by Ellen Derby (Bellows) Robinson Endicott, the wife of retired advertising executive Thorndike Howe Endicott. They had married in 1928 and had then lived at 154 Riverway. Prior to their marriage, he had lived in an apartment at 199 Marlborough.

Ellen Endicott had been married previously to Dr. Samuel Robinson and two of their children — Thomas Derby Robinson and Katharine L. Robinson — lived with the Endicotts in 1930 and probably later.  Prior to her marriage to Dr. Robinson in 1905, she had lived next door, at 29 Hereford, with her mother, Anna Huidekeoper (Peabody) Bellows, the widow of Rev. Henry Whitney Bellows.

The Endicotts continued to live at 31 Hereford during the 1935-1936 winter season, but spent the next season in Florida.

During the 1936-1937 winter season, 31 Hereford was the home of shoe manufacturer Wilfred R. Shrigley and his wife, Constance (Jackson) Shrigley. They previously had lived in Salem. They also maintained home on Marblehead Neck.

The Endicotts resumed living at 31 Hereford by 1938 and continued to live there until about 1939.

On September 7, 1939, the Boston Safe Deposit and Trust Company foreclosed on a mortgage it held on 31 Hereford and took possession of the property.

On September 12, 1939, 31 Hereford was purchased from the bank by Caroline Stevenson (Saltonstall) Mack, the wife of Harold A. Mack. They previously had lived at 31 Fairfield. That same month, he filed for (and subsequently received) permission to remodel the interior of the house.  It remained a single-family dwelling.

Harold Mack was an importer with offices and a store, The Artisans, at 165 Newbury.  Caroline Mack was Secretary of the Consumers League of Massachusetts and an active environmental conservationist.

Harold Mack died in January of 1968.  Caroline Mack continued to live at 31 Hereford until her death in November of 1983.

On July 24, 1984, 31 Hereford was purchased from Caroline Mack’s estate by Mark Williams and his wife, Meryl S. LeBoff. In October of 1984, they applied for (and subsequently received) permission to convert the property into a two-family dwelling.

Mark Williams and Meryl LeBoff divorced and, on September 6, 2016, he transferred his interest in 31 Hereford to her.

31 Hereford continued to be assessed as a two-family dwelling in 2020. 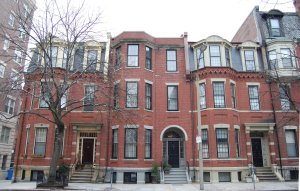