318 Commonwealth was designed by architect Samuel D. Kelley and built in 1881-1882 by Antoine Xavier and William Welch, builders, for building contractor John W. Shapleigh, one of two contiguous houses (318-320 Commonwealth) in the same design built for speculative sale. He is shown as the owner on the original building permit application for the two houses (one application for both houses), dated September 6, 1881.

John Shapleigh purchased the 48 foot wide parcel for 318-320 Commonwealth on March 21, 1881, from Frank N. Thayer and William H. Lincoln. The parcel was composed of two lots, a 13.41 foot lot to the west that Frank Thayer and William Lincoln had purchased on October 23, 1879, from John Worster (the northeastern portion of an irregularly shaped lot with a 44.75 foot frontage on Commonwealth), and a 34.59 foot lot to the east (the western part of a 62.25 foot lot they had purchased on April 1, 1879, from Caleb H. Warner and Charles F. Smith, trustees for the benefit of the creditors of Nathan Matthews). All of the land was part of a larger tract of land Nathan Matthews had purchased on January 2, 1871, from David Sears, Jr., Frederick R. Sears, and Knyvet Sears.

Caleb Warner and Charles Smith also owned the land on Newbury from the northwest corner of Newbury and Hereford running west 90.25 feet. In their deed selling the 62.25 foot parcel to Frank Thayer and William Lincoln, they included language specifying that only dwelling houses facing Hereford could be built on the land they retained on Newbury. John Worster owned the land on Newbury to the west of the land owned by Caleb Warner and Charles Smith, and in his deed selling the 13.41 foot lot to Frank Thayer and William Lincoln, he included language specifying that, for a period of ten years, no stable would be built on his land on Newbury without the consent of the owners of the land he was selling on Commonwealth.

On September 5, 1882, 318 Commonwealth was purchased from John Shapleigh by Mary Coffin (Lunt) Shepard, the wife of attorney Edward Olcott Shepard. They previously had lived at the Hotel Vendôme, and before that at 225 Marlborough.

The Shepards continued to live at 318 Commonwealth during the 1889-1890 winter season, after which they appear to have made Newburyport their primary residence.  Edward Shepard continued to practice law in Boston and to list 318 Commonwealth as his residence in the City Directories, and it appears likely that he maintained a town residence there while leasing most of the house to others. He died in April of 1903.

In 1893, 318 Commonwealth was the home of boot and shoe manufacturer Charles Henry Colburn and his wife, Frances Eudora (Draper) Colburn. Their primary residence was in Hopedale.

On June 3, 1893, the Boston Globe reported that, Frances Colburn had notified the police that a bag containing an estimated $70,000 in diamonds and jewelry was missing and possibly stolen. Mrs. Colburn and their daughters, Helen Louise Colburn and Alice Draper Colburn, had moved from 318 Commonwealth to Hopedale on the previous day and discovered the loss upon their arrival at their country home. Charles Colburn had remained in town. The coachman was sent back to Boston and the Commonwealth Avenue home was thoroughly searched to no avail. However, when Charles Colburn was contacted, he reported that he had found the bag on an upstairs table, taken into his possession, and the jewelry was safe.

In July of 1893, the Colburns purchased 228 Beacon as their Boston home.

By the 1893-1894 winter season, 318 Commonwealth was the home of Lucius H. Tuttle and his wife, Estelle Hazen (Martin) Tuttle.  They previously had lived in New Haven, where he had been first vice president of the New York, New Haven, and Hartford Railroad. He was named president of the Boston and Maine Railroad in August of 1893 and moved to Boston to assume that position in October.

The Tuttles continued to live at 318 Commonwealth during the 1906-1907 season, but moved thereafter to Brookline.

On April 29, 1908, 318 Commonwealth was acquired from Mary Shepard by wool merchant Conrad Hobbs. He and his wife, Jessie (Langmaid) Hobbs, made it their home. They previously had lived at 31 Hereford. They also maintained a home at North Grafton, Massachusetts.

Conrad and Jessie Hobbs continued to live at 318 Commonwealth during the 1927-1928 winter season, but moved thereafter to 162 Riverway. 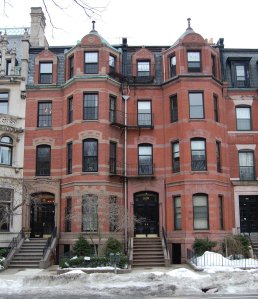 On February 26, 1931, 318 Commonwealth was purchased from Jessie Hobbs by George J. Wilson.

On September 25, 1933, 318 Commonwealth was acquired from George Wilson by Phyllis Frank. She lived there with her father, Ludwig Frank, and her sister, Virginia Frank. They all previously had lived at 104 Hemenway.

Ludwig Frank was an art teacher. He was founder and director of the Designers Art School at 729 Boylston. A designer and decorator of glass, china, and silverware, he had been head designer with Bigelow-Kennard & Co., silver and goldsmiths. Phyllis Frank was a secretary with the school, and Virginia Frank was a librarian.

On May 28, 1934, Frederick E. Johnston foreclosed on a mortgage from Phyllis Frank and took possession of 318 Commonwealth.

On May 18, 1936, 318 Commonwealth was acquired from Frederick Johnston by Charles G. Densmore. In December of 1935, he applied for (and subsequently received) permission to convert the property from a single-family dwelling into four apartments.

On April 29, 1938, the First Federal Savings and Loan Association of Boston foreclosed on its mortgage to Charles Densmore and took possession of the property.

On December 31, 1938, 318 Commonwealth was acquired from First Federal Savings and Loan by Charles Stanley Kimball and his wife, Laura E. (Thompson) Kimball. They lived in Natick. On the same day, they transferred it to the Boston Management Corporation, a real estate management firm.

Charles Kimball died in June of 1945, and on August 23, 1945, the Boston Management Corporation transferred the property back to Laura Kimball.

On August 27, 1945, 318 Commonwealth was acquired from Laura Kimball by Signe Ingeborg (Brunstrom) Gavin, the wife of Basil Gavin, treasurer of the Boston Management Corporation. They lived in Millis.

Basil and Signe Gavin divorced soon thereafter, and on November 28, 1947, the property was acquired from her by the Boston Management Corporation. She was a resident of Reno, Nevada, at the time of the transaction.

In January of 1979, she filed for (and subsequently received) permission to legalize the occupancy as five units.