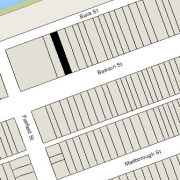 320 Beacon is located on the north side of Beacon, between Exeter and Fairfield, with 318 Beacon to the east and 322 Beacon to the west.

320 Beacon was built in 1878 by Goldthwait and Chapin, builders, as the home of Richard Morrell Staigg, a portrait painter, and his wife, Anna (Atkinson) Staigg. They previously had lived at 13 Hereford.  They also maintained a home in Newport.

Richard Staigg is shown as the owner on the original building permit application for 320 Beacon dated June 1, 1878, and on the final inspection report dated December 30, 1878. No architect is indicated on either form. 320 Beacon was numbered as 318 Beacon until about 1889.

Richard Staigg purchased the land for 320 Beacon from the Boston and Roxbury Mill Corporation on December 3, 1878, after the house had been built.

Click here for an index to the deeds for 320 Beacon, and click here for further information on the land on the north side of Beacon, including the Storrow Memorial Embankment on the Esplanade.

By 1880, the Staiggs had been joined at 320 Beacon by Anna Staigg’s unmarried sister, Elizabeth Parsons Atkinson.

During the 1881-1882 winter season, 320 Beacon was the home of Mary Ruth (Channing) Eustis, the widow of Frederick Augustus Eustis.

On July 15, 1882, 320 Beacon was purchased from Richard Staigg’s estate by Marion Estelle (Welch) Hildreth, the wife of Henry Albert Hildreth, a retired wire goods manufacturer. In 1880, they had lived in Lowell. 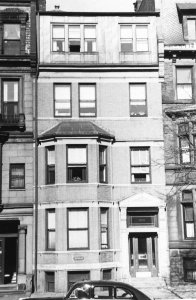 In July of 1882, Henry A. Hildreth filed for (and subsequently received) permission to build a stable at the rear of the house.

Henry Hildreth died in October of 1885, and Marion Hildreth continued to live at 320 Beacon with their two children, Henry Arthur Hildreth and Alma Estelle Hildreth.

In October of 1906, Alma Hildreth married Julian Dana de Cordova, a lawyer and stockbroker.  After their marriage, they lived with her mother and brother at 320 Beacon.

The de Cordovas separated by 1911 and divorced in 1913. She and her brother continued to live at 320 Beacon until the early 1930s. They also maintained a home on Marblehead Neck which became their sole residence by 1934.

On January 16, 1930, Henry Hildreth and Alma Hildreth (having taken back her unmarried name) transferred 320 Beacon to themselves as trustees of The Hildreth Trust.

In April of  1936, Henry Hildreth applied for (and subsequently received) permission to convert the property from a single family dwelling into five apartments.

On October 23, 1953, Henry Hildreth and Alma Hildreth transferred 320 Beacon out of The Hildreth Trust and back into their own names. She died in February of 1955 and he died in May of 1963.

On January 27, 1964, 320 Beacon was acquired from Henry Hildreth’s estate by Edna Morse (Kelley) Durgin, the former wife of Cyrus Wilbur Durgin. She lived in one of the apartments; she previously had lived in an apartment at 186 Beacon.

Edna Morse Durgin was food editor for the Herald-Traveler newspaper until the late 1960s, when she became senior public information officer for the Massachusetts Department of Public Works.

In the mid-1960s, she married again to Bentley Wirt Warren, Jr., an investment banker. After their marriage, they lived at 320 Beacon. He previously had lived in an apartment at 228 Beacon.

On April 29, 1976, 320 Beacon was purchased from Edna Durgin Warren by Betty Bishop. On January 1, 1977, she converted the property into five condominium units, the 320 Beacon Street Condominium.