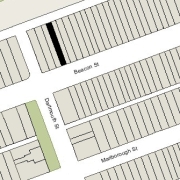 228 Beacon is located on the north side of Beacon, between Clarendon and Dartmouth, with 226 Beacon to the east and 230 Beacon to the west.

228 Beacon was built ca. 1864 for dry goods merchant and cotton broker George Phineas Upham, one of two contiguous houses (226-228 Beacon) designed as a symmetrical pair. He and his wife, Sarah (Sprague) Upham, lived at 122 Beacon.

Click here for an index to the deeds for 228 Beacon, and click here for further information on the land on the north side of Beacon, including the Storrow Memorial Embankment on the Esplanade.

Freeman Cobb is credited as one of the founders of the express/stagecoach business in Australia, where he had gone in the mid-1850s on behalf of the Adams Express Company.  He subsequently founded his own stagecoach line in Australia, but soon returned to the United States.  After an unsuccessful foray into banking, he re-joined Adams Express as manager of the Boston agency.  The Cobbs also maintained a home in Brewster and In 1864-1865, while he was living at 228 Beacon, he was a State Senator for Barnstable County.

In April of 1866, George Upham offered 228 Beacon for sale through real estate dealer John Jeffries, Jr., whose advertisements in the Boston Daily Advertiser noted that it was occupied and could only be seen by appointment.

In May of 1866, Freeman Cobb purchased and subsequently moved to 224 Beacon.

In July of 1866, John Jeffries, Jr., advertised 228 Beacon for sale again, and on August 2, 1866, it was purchased by a trust established under the will of dry goods merchant John Newton Turner, who had died in May of 1864. His widow, Harriet (Dana) Turner, and their son, Nathaniel Dana Turner, were the trustees.

228 Beacon became Harriet (Dana) Turner’s home. Her son and daughter, Nathaniel Dana Turner and Helen Turner, lived with her.  They previously had lived at 16 Pemberton Square. Nathaniel Turner was a boot and shoe dealer.

Harriet Turner died in November of 1878. Nathaniel Turner and Helen Turner continued to live at 228 Beacon. They also maintained a home at Quissett in Falmouth.

On May 15, 1891, Nathaniel Turner, as surviving trustee under his father’s will, transferred 228 Beacon to his sister, Helen.

The house was not listed in the 1894 Blue Book.

On July 6, 1893, 228 Beacon was acquired from Helen Turner by Helen Louise Colburn and her sister, Alice Draper Colburn, the daughters of boot and shoe manufacturer Charles Henry Colburn and Frances Eudora (Draper) Colburn. The family made it their Boston home and also maintained a home in Hopedale. They previously had lived at 318 Commonwealth and in Hopedale.

During the 1895-1896 winter season, the Colburns were traveling in Europe and 228 Beacon was the home of John Caswell and his wife, Gertrude (Robbins) Caswell. They had lived at 501 Beacon during the previous season. They also maintained a home, Round Plain Farm, in Pride’s Crossing. He was a real estate investor, and would become a noted big game hunter and gun expert.  They had moved from 228 Beacon by the 1896-1897 season, and were living in an apartment at 362 Commonwealth during the 1897-1898 season.  By the 1903-1904 season, they had moved back to 501 Beacon.

By 1899, 228 Beacon was the home of Mrs. Caroline Miller (Bigelow) Amory, wife of George Washington Amory, and their daughters, Caroline and Constance Amory.  They previously had lived at the Hotel Victoria at 273 Dartmouth and before that at 8 Gloucester. George Amory lived separately at 10 Charles Street and in Bourne. He was a cotton buyer.

George Amory died in September of 1899; Caroline Amory and their daughters moved to 361 Beacon by 1900.

On September 17, 1900, 228 Beacon was purchased from Alice D. Colburn and Frances Colburn (as the heir of her daughter, Helen) by Georgianna Olivia (Davis) Taylor, the wife of Boston Globe published Charles Henry Taylor. They lived next door, at 230 Beacon.

228 Beacon became the home of the Taylors’ son and daughter-in-law, John Irving Taylor and Helen (Burnap) Taylor. They previously had lived in Brookline.

At the time they lived at 228 Beacon, John Irving Taylor was affiliated with the Boston Globe.  Later, from 1903 to 1911, he owned the American League baseball team in Boston and is credited with choosing the name “Red Sox.”  He built Fenway Park, which opened in April of 1912.

By the 1901-1902 winter season, the Taylors were living elsewhere and 228 Beacon was the home of Richard Hathaway Morgan, a retired manufacturer from New Bedford, and his wife, Joanna White (Davis) Morgan.  They had lived at 237 Beacon in 1900.  They also maintained a home in Plymouth.  They continued to live at 228 Beacon during the 1902-1903 winter season.

On March 31, 1904, 228 Beacon was acquired from Georgianna Taylor by the estate of Waldo Ogden Ross, who had been a thread and twine manufacturer, as the home of his widow, Ellen (Haven) Ross. She previously had lived at 1 Chestnut. She also maintained a home in Beverly Farms. 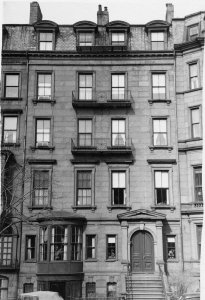 On March 3, 1939, 228 Beacon was acquired from Waldo O. Ross’s estate by Bentley Wirt Warren and his wife, Ellen Hatch (Windom) Warren. They previously had lived at 185 Beacon. They also maintained a home in Williamstown, Massachusetts.

Bentley Warren was an attorney in Boston.  From 1925 to 1927, he served as president of the “Sentinals of the Republic,” an ultra-conservative organization formed to protect states’ rights, oppose government regulation of business, and fight international communism.

In December of 1938, he applied for (and subsequently received) permission to remodel the house, including lowering the front entrance to street level.  The remodeling was designed by architects Putnam and Cox.

Ellen Warren died in November of 1941.  Bentley Warren continued to live at 228 Beacon until his death in February of 1947. After his death, the house remained in the Warren family, the home of Bentley Warren, Jr., and his aunt, Florence Bronson Windom.

They continued to live there until about 1958.  By 1959 it was shown as vacant in the City Directory.  In October of 1959, Bentley Warren, Jr., applied for (and subsequently received) permission to convert the property from a single-family dwelling to five unit dwelling and medical office.  In January of 1960, he amended the application to increase number of units to six.

On May 23, 1962, 228 Beacon was acquired from Bentley Warren, Jr., by Donald Arthur Flaherty. He was a real estate manager and former television news editor. He and his wife, Marion Louise (Taylor) Flaherty, lived in one of the apartments.  They previously had lived in an apartment at 167 Commonwealth.  His father, William Flaherty, lived with them; he previously had lived in Reading.

On May 10, 1963, 228 Beacon was acquired from Donald Flaherty by real estate dealer Edward L. Britt and his wife, Ann M. (Lynch) Britt. The Flahertys continued to live in an apartment at 228 Beacon until 1970, when they purchased and moved to an apartment at 316 Beacon.

In April of 1964, Edward Britt filed for (and subsequently received) permission to combine 228 Beacon and 230 Beacon, cutting through openings in the party wall on the ground level and fourth floors. He also increased the number of units at 228 Beacon from six to seven, and increased the occupancy of 230 Beacon from two units and a dental office to eight units and a dental office.