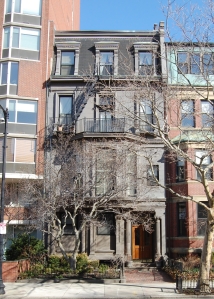 322 Beacon was designed by Snell and Gregerson, architects, and built in 1877-1878 by Webster and Dixon, builders, as the home of Charles John Whitmore and his wife, Sarah Olcott Murdoch (Blake) Whitmore.  They previously had lived at 101 Beacon. They also maintained a home in Mattapoisett.

Charles Whitmore is shown as the owner of 322 Beacon on the original building permit application, dated November 7, 1877.  322 Beacon was numbered as 320 Beacon until about 1889.

Sarah Whitmore purchased the land for 322 Beacon from the Boston and Roxbury Mill Corporation on August 12, 1878, after the house had been built.

Click here for an index to the deeds for 322 Beacon, and click here for further information on the land on the north side of Beacon, including the Storrow Memorial Embankment on the Esplanade.

Charles Whitmore was a wholesale grocery merchant.  He also served as treasurer of the Ames Plow Company and, by 1885, was Vice President of the Market National Bank.

By 1897, they had been joined at 322 Beacon by Sarah Whitmore’s mother, Mary Elizabeth (Tarbell) Blake Whitmore, the widow of George Blake, Jr., and of Charles Octavius Whitmore.  She was also Charles Whitmore’s stepmother, having married his father (Charles O. Whitmore) in 1851.  Mary Whitmore died in March of 1898.

Charles and Sarah Whitmore continued to live at 322 Beacon until his death in October of 1903.

On March 17, 1903, 322 Beacon was purchased from Sarah Whitmore by Sarah Marston (Robinson) Harding, the wife of dry goods and wool merchant Edgar Harding.  The Hardings lived at 324 Beacon and leased 322 Beacon to others.

By the 1905-1906 winter season, it was the home of attorney and stockbroker Chester Linwood Dane and his wife, Grace (Oliver) Dane.  They previously had lived at 122 Marlborough.  They also maintained a home, Old Wharf House, on Peach’s Point in Marblehead.  They continued to live at 322 Beacon during the 1907-1908 season, but moved thereafter to the Hotel Lenox at 61 Exeter.

By the 1908-1909 winter season, 322 Beacon was the home of attorney Robert Hallowell Gardiner and his wife, Alice (Bangs) Gardiner. They previously had lived at 77 Marlborough. They also maintained a home, Oaklands, in Gardiner, Maine.

Alice Gardiner married in April of 1908 to Livingston Davis of 215 Commonwealth, a banker and note broker. After their marriage, they lived in Milton.

Robert H. Gardiner, Jr., a lawyer, marred in September of 1910 to Elizabeth Denny of Brookline. After their marriage, they lived in Dedham.

Anna Gardiner married in December of 1914, in London, to Lt. Roger Francis Draper of the York and Lancashire regiment of the British Army. He was killed in action in August of 1915. She married again in September of 1919 to architect Henry Richardson Shepley.

William T. Gardiner married in September of 1916 to Margaret Thomas of 20 Gloucester. After their marriage, they lived at 25 Chestnut.  He had graduated from Harvard Law School that year and was admitted to the Bar in 1917. He served in World War I, after which they moved to Gardiner, Maine.  He served as Governor of Maine from 1928 through 1932.

The house was shown as vacant in the 1935 City Directory.

On April 6, 1935, 322 Beacon was purchased from Alice Gardiner’s estate by real estate dealer Henry C. Brookings, and on April 26, 1935, it was acquired from him by Doreen Simpson (Woodyatt) Bowman, the wife of Dr. Edward Francis Bowman, a physician. They lived (and he maintained his office) at 183 Bay State Road. They also maintained a home in Scituate.

After remodeling 322 Beacon, Edward Bowman moved his offices there. He and his wife lived temporarily at 1 Spruce Court, and then in March of 1937 purchased and subsequently moved to 149 Beacon.  He continued to maintain his office at 322 Beacon.

Annie Bowman died in 1936 and the Wordsworth Bowmans moved thereafter to live at 149 Beacon with Edward and Doreen Bowman.

In March of 1943, Edward Bowman was cited by the Building Department for failing to obtain a permit to convert the property into five apartments, but as of 1945 he still had not filed to obtain one.

On January 26, 1952, 322 Beacon was acquired from Patrick O’Connor by Louis J. Binda. He was an elevator starter at a downtown Boston building who frequently held property for various other owners. He was unmarried and lived in Cambridge. On April 9, 1953, Robert J. Sherman (presumably acting on behalf of Louis Binda) filed for (and subsequently received) permission to legalize the occupancy as seven units.

Edward Bowman continued to maintain his office at 322 Beacon until about 1954, when he moved it to 287 Commonwealth.

On December 23, 2005, 322 Beacon was purchased from the David-Andrew Trust by the First Beacon Real Estate Trust (Jeffrey M. Stitt, trustee).