327 Beacon is located on the south side of Beacon, between Exeter and Fairfield, with 325 Beacon to the east and 329 Beacon to the west.

327 Beacon was built on the eastern 33 feet of a 50 foot wide lot originally sold by the Commonwealth of Massachusetts as two 25 foot lots at its March 2, 1872, auction. Frederick Pope had been the successful bidder, but did not take title to the land before erecting the house.

In mid-March of 1872, he filed a Notice of Intention to Build at 327 Beacon (reported in the Boston Traveller on March 23, 1872). Construction probably started soon thereafter, and on December 16, 1872, he advertised it for sale in the Boston Evening Transcript. He described the property as “two stories, basement and French roof. Four stories in natural woods. Four stories and attic finished.”

On April 30, 1873, the 50 foot wide lot with the house on the eastern 33 feet was purchased from the Commonwealth by Emma Esther (Howe) Proctor, the wife of leather dealer and real estate investor Thomas Emerson Proctor, to whom Frederick Pope transferred his right to purchase the property. On the same day, she sold the remaining 17 foot lot to the west to Frederick Pope, including in the deed a stipulation that the rear of any house built at 329 Beacon could not extend further south than the rear of the house at 327 Beacon.

Click here for an index to the deeds for 327 Beacon, and click here for further information about the land between the south side of Beacon and Alley 417, from Exeter to Fairfield.

By mid-1873, Thomas and Emma (Howe) Proctor had made 327 Beacon their home. They previously had lived in Peabody.

In September of 1888, Thomas Proctor purchased the stable at 351 Newbury. The Proctor family continued to own it until 1910.

Anna Proctor married in October of 1890 to Charles Goodnow Rice of 341 Commonwealth, a wool merchant.  After their marriage, they lived at 327 Beacon with her parents during the 1890-1891 winter season, and then moved to 469 Beacon, which her father had purchased in August of 1890 to be their home.

Thomas and Emma Proctor and their unmarried children continued to live at 327 Beacon during the 1891-1892 winter season. They also maintained a home in Beverly.  By the 1892-1893 season, they had moved to a new home they had built at 273 Commonwealth.

On May 30, 1894, 327 Beacon was purchased from Emma Proctor by Mary Susanna (Davis) Hutchins, the wife of Constantine Foundulaki Hutchins. They previously had lived at 83 Newbury.

Constantine Hutchins was a wool manufacturer and merchant.

Constantine Hutchins died in March of 1927.  Mary Hutchins continued to live at 327 Beacon until her death in July of 1934.

The house was not listed in the 1935 and 1936 Blue Books and was shown as vacant in the 1935 and 1936 City Directories. It continued to be owned by the trustees under Constantine Hutchins’s will, who were his son, investment banker Constantine Hutchins, and his grandson, banker George Glover Crocker, III (the son of George Glover Crocker, Jr., and Julia Hurd Hutchins).

By the 1936-1937 winter season, it was the home of George Glover Crocker, III, and his wife, Marie Davenport (Brown) Crocker. They previously had lived in Brookline. They also maintained a home in Cohasset. 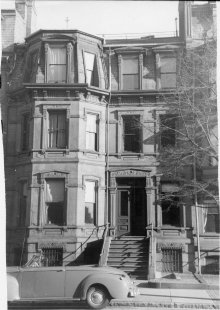 They continued to live at 327 Beacon until about 1943, when they moved to 396 Beacon, which had been the home of Marie Crocker’s parent, Davenport Brown and Marie (McKenna) Brown.

On October 5, 1943, 327 Beacon was acquired by Israel Ramler. He was president of the State Electric and Lock Shop, and lived in Roxbury.

The property subsequently changed hands. By the mid-1940s, it appears to have been converted into three apartments, and by the late 1940s into seven apartments.  It was probably at this time that an additional story was added.  Photographs from the early 1940s show that it was only three stories high, but permit documents from 1950 show it to be four stories in height.

In June of 1950, real estate dealer Hyman Goodman, as Harold Rutledge’s agent, filed for filed for permission to change the legal occupancy from seven apartments to seven apartments and the office of the Licensed Attendants Association (a recently formed group of medical attendants).

In February of 1951, the Building Department indicated that the legal occupancy of 327 Beacon had never been changed from a single-family dwelling, and Hyman Goodman filed for (and subsequently received) permission to legalize the occupancy as seven apartments.

The property changed hands and on March 23, 1956, was purchased by real estate dealer Earl Carnes Munson. In August of 1956, he acquired 325 Beacon. He lived at 325 Beacon, where he operated a lodging house, and also managed the apartments at 327 Beacon.

In April of 1963, Earl Munn filed for (and subsequently received) permission to change the legal occupancy to six units.

On May 22, 1979, Robert Banker transferred 327 Beacon to the Robert Banker Management Company. That same month, he filed for (and subsequently received) permission to reduce the number of units from six to five.

On December 7, 1979, he converted the property into five condominium units, the 327 Beacon Street Condominium.