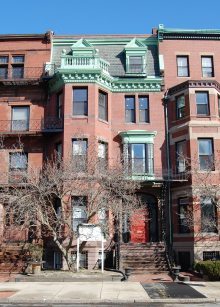 341 Commonwealth was designed by Kirby and Lewis, architects, and built in 1880-1881, one of three contiguous houses built by building contractor Asa Harden Caton for speculative sale on land owned by wallpaper merchant Charles Henry Hayden. 341 Commonwealth was built under an agreement with Nehemiah Webster Rice. He is shown as the owner on the original building permit application, dated April 9, 1880, but did not take title to the house from Charles Hayden until January 4, 1881, after it was completed.

Charles Hayden purchased the land for 337-339-341 Commonwealth on February 27, 1879, from Grenville T. W. Braman, Henry D. Hyde, and Henry M. Whitney, trustees of a real estate investment trust that had purchased several parcels of land on March 1, 1872, from the Boston Water Power Company

Nehemiah Rice was a dealer in leather, hides, and wool. He and his wife, Josephine (Emery) Rice lived at 59 Chester Square and then, during the 1882-1883 winter season, at 353 Beacon. 341 Commonwealth may have been the home of a Mr. Newell who was listed there in the 1882 and 1883 Blue Books, but not in the City Directories. 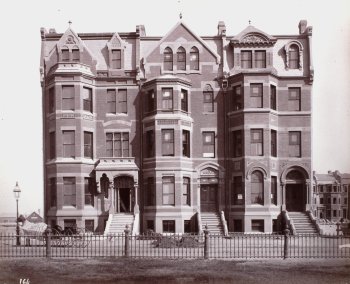 In October of 1884, the Nehemiah Rice purchased the stable at 349 Newbury. The Rice family continued to own it until 1921.

The Rices’ two children, Annie Tyler Rice and Charles Goodnow Rice, a member of his father’s hide and wool firm, lived with them at 341 Commonwealth.  Charles Rice married in October of 1890 to Anne S. Proctor. After their marriage, they lived at 327 Beacon with her parents, Thomas Emerson Proctor and Emma Esther (Howe) Proctor, during the 1890-1891 winter season, and then moved to 469 Beacon.

In the mid-1890s, the Rices built a home at Beverly Cove in Beverly

Nehemiah Rice died in December of 1911.  Josephine Rice continued to live at 341 Commonwealth and in Beverly with their daughter, Annie.

On June 30, 1931, 341 Commonwealth was purchased from Annie (Proctor) Rice, the wife of Charles Rice, as conservator for her sister-in-law, Annie Tyler Rice, by the Garland School of Home Making (later to become Garland Junior College). That same month, it also acquired 343 Commonwealth.

Both properties were shown as vacant (or were not listed) in the 1930-1933 City Directories, but had been converted into dormitories by 1934. 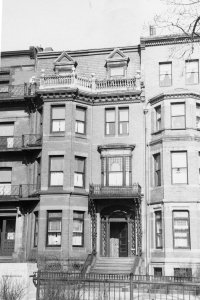 In May of 1981, the Commonwealth College Trust filed for permission to convert 341 Commonwealth from a dormitory into six apartments, which it stated was the existing use.  It subsequently abandoned the application.

In February of 1985, the 341 Commonwealth Avenue Trust filed for (and subsequently received) permission to legalize the occupancy as six units.

In December of 1981, all six units were purchased from Judith Schwartz by six separate trusts established by real estate dealer Eugene William Friedrich: Unit 1 with Kendra Windsor Kaplan (Eugene Friedrich’s wife) as trustee; Unit 3 and Unit 5 with Karen A. Goldrich as trustee; and Unit 2, Unit 4, and Unit 6 with Pamela D. Lapham as trustee.

Unit 3 and Unit 4 were sold along one of the five parking spaces.  The remaining four units and four parking spaces continued to be owned by the trusts established by Eugene Friedrich.

Eugene Friedrich died in January of 2018 and Kendra (Kaplan) Friedrich died in November of 2018. Their daughter, Whitney Windsor (Friedrich) Wolf, became trustee of all of the trusts owning units and parking spaces at 341 Commonwealth.

Between February of 2018 and September of 2019, Nubar der Hagopian acquired all six units and five parking spaces at 341 Commonwealth, and on October 6, 2019, he transferred the property to the 341 Commonwealth Avenue LLC, of which he and David Garabedian were co-managers.

On June 30, 2021, the 341 Commonwealth Avenue LLC established a new condominium with five units, The Garland Condominium.