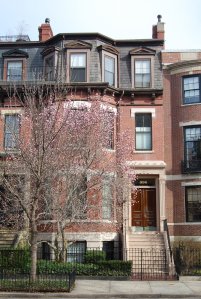 The seven houses were built on the western 180 feet of a 200 foot lot George Peters purchased from the Boston and Roxbury Mill Corporation on March 1, 1872, after the houses were under construction.

Click here for an index to the deeds for 396 Beacon, and click here for further information on the land on the north side of Beacon, including the Storrow Memorial Embankment on the Esplanade.

All seven houses were completed by 1874 and are shown on the 1874 Hopkins map. However, only 388 Beacon was sold immediately. The remaining six houses at 390-400 Beacon were unsold, and possibly unoccupied, until 1877.

In May of 1876, real estate dealer James T. Eldredge advertised in the Boston Daily Advertiser, offering three of the houses – 392, 396, and 400 Beacon – for sale.  The advertisement noted that they would be sold “at prices to meet the times,” and that “each house has parlor, dining-room and library on the first floor, and one has an additional drawing room on the second floor.”

396 Beacon did not sell and, on March 28, 1878, it was offered for “positive sale” at public auction at the behest of the New England Mutual Life Insurance Company, which held a mortgage given by George Peters.  Retired merchant Richard Perkins was the successful bidder and, on April 5. 1878, New England Mutual Life transferred the property to him.  He and his wife, Catherine P. (Dow) Perkins, lived at 146 Charles.

On December 1, 1879, 396 Beacon was purchased from Richard Perkins by Maria Ann (Pratt) Smith, the wife of leather dealer Albert Oliver Smith. They previously had lived at 21 Allston Street. They also maintained a home on Jerusalem Road in Cohasset.

Maria Smith died in April of 1915; her sons and sister continued to live at 396 Beacon during the 1915-1916 winter season, but moved thereafter. Stanley Smith married in March of 1916 to Nora Kathleen Johnstone. In January of 1920, at the time of the US Census, Stanley and Nora Smith were living at 122 Bay State Road, and Helen Pratt and Albert Smith were living in Andover.

On September 11, 1916, 396 Beacon was purchased from Albert and Stanley Smith by real estate trustee Davenport Brown. He and his wife, Marie (McKenna) Brown, made it their home. They previously had lived in Medfield. They raised their only daughter, Marie Davenport Brown (born Marie McKenna Brown) there.

By the 1926-1927 winter season, they were joined by Davenport Brown’s niece, Mary Clarissa Vance, the daughter of Reginald Conroy Vance and Clarissa (Brown) Vance. She previously had lived with her parents in Washington DC. Mary Vance and Marie Brown both were debutantes in 1928.

Marie Brown married in January of 1930 to George Glover Crocker, III. After their marriage, they lived in Cohasset.

Mary Vance continued to live at 396 Beacon until her cousin’s marriage, but moved thereafter. She married in September of 1934 to Basil Livingston Macassey of London.

By 1944, 396 Beacon had become the home of the Browns’ son-in-law and daughter, George and Marie (Brown) Crocker. He was a manufacturer and former banker. They previously had lived at 327 Beacon.  They continued to live at 396 Beacon until about 1952.

On May 6, 1952, 396 Beacon was purchased from Davenport Brown by the Weston Construction Company (Francis J. Callahan, president, and Thomas J. Diab, treasurer).

After it was remodeled, the Hills lived in one of the units. They previously had lived in Brookline.

Emilie Hill died in April of 1965, and in February of 1968 Lawrence Hill married again, to Barbara Ruggles (Ferguson) Lincoln, the widow of John Mason Lincoln.  After their marriage, they lived at 396 Beacon and later in Florida.

On February 18, 1981, he converted the property into seven condominium units, the 396 Beacon Street Condominium.

In July of 2004, the owner of the unit on the garden level, applied for (and subsequently received) permission to legalize the building as having seven (rather than six) units.