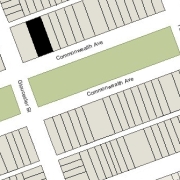 273 Commonwealth was designed by Hartwell and Richardson, architects, and built in 1891-1892 by Norcross Brothers, builders, for leather dealer and real estate investor Thomas Emerson Proctor.

Thomas Proctor purchased the 52 foot wide lot for 273 Commonwealth on August 11, 1890, from Susan Burley (Howes) Cabot of Beverly, the widow of Joseph Sebastian Cabot. The land had changed hands several times and originally was part of one of several parcels purchased on January 29, 1866, from the Boston Water Power Company by a real estate investment trust formed by John Templeman Coolidge, Franklin Evans, and Charles Henry Parker.  The trust had subsequently subdivided the parcels into lots, which it sold to investors and builders, who then frequently resold the lots to others.

Click here for an index to the deeds for 273 Commonwealth, and click here for further information about the land between the north side of Commonwealth and Alley 427, from Fairfield to Gloucester.

The house was completed by the 1892-1893 winter season and Thomas Proctor and his wife, Emma Esther (Howe) Proctor, made it their home.  They previously had lived at 327 Beacon. They also owned a stable at 351 Newbury and a home in Beverly.

The Proctors’ three unmarried children lived with them: James Howe Proctor, Emily W. Proctor, and Thomas Emerson Proctor, Jr. James Proctor had graduated from Harvard in 1889 and was associated with his father’s leather firm; Thomas Proctor, Jr., was a student at Harvard. The Proctors’ married daughter, Anna S. (Proctor) Rice, and her husband, Charles Goodnow Rice, lived at 469 Beacon.

On September 6, 1893, Thomas Proctor transferred 273 Commonwealth to his nephew, Abel Harrison Proctor, who, on the same day, transferred the property to Emma Proctor.

Thomas Proctor died in December of 1894. Emma Proctor and their children continued to live at 273 Commonwealth.

Thomas Proctor, Jr., graduated from Harvard in 1895 and worked with his brother managing the family’s leather business and real estate investments. A horticulturalist by avocation, he purchased a farm in Topsfield where he developed a collection of specimen trees and shrubs, and built a noted rock garden (he bequeathed about 2000 acres of his land to the Massachusetts Audubon Society and it later became part of the Ipswich River Wildlife Sanctuary). He continued to maintain his Boston residence at 273 Commonwealth.

Emily Proctor married in April of 1896 to George Snell Mandell. After their marriage, they lived at 256 Commonwealth. George Mandell’s father, Samuel Pierce Mandell, was publisher of the Boston Evening Transcript. George Mandell was associated with the Transcript and, after his father’s death in 1920, became the publisher.

James Proctor married in April of 1897 to Martha (Mattina) Jackson Riker. After their marriage, they lived at 273 Commonwealth. In 1899-1900 they built a home in Ipswich, near the boundary with Hamilton, which they made their year-round residence. He continued in the leather business until 1897, after which he managed his family’s real estate holdings and served as a trustee.

Emma (Howe) Proctor died in January of 1910. In her will, she left 273 Commonwealth to James Proctor and her home in Beverly to Thomas Proctor, Jr.

By the 1910-1911 winter season, James and Martha Proctor had made 273 Commonwealth their home. They also continued to maintain a home in Ipswich.

Thomas Proctor, Jr., made Topsfield his year-round residence for several years, and then purchased 133 Commonwealth as his Boston home in June of 1912.

Martha (Riker) Proctor died in October of 1923. James Proctor and their five children continued to live at 273 Commonwealth and in Ipswich.

By the mid-1920s, James Proctor was a trustee and president of E. A. Abbott Company, building contractors.

John Riker Proctor married in June of 1925 to Anne Margaret Hall.  After their marriage, they lived in an apartment at 100 Beacon.

Thomas Proctor, II, married in April of 1926 to Margaret Olivia Flint. After their marriage, they lived at 273 Commonwealth with James Proctor but had moved by the 1928-1929 winter season to an apartment at 192 Commonwealth.  He was treasurer of the E. A. Abbott Company (of which his father was the president).

Mary Proctor married in June of 1926 to Nathan Crary Shiverick.  After their marriage, they lived in Avon, New York.

By the 1931-1932 winter season, Thomas and Margaret Proctor were once again living at 273 Commonwealth with his father and sisters, Martha and Esther.  They also maintained a home, Foxcroft, in Hamilton, which they made their primary residence in about 1934.

Martha Proctor married in January of 1939 to Richard (Ong) Preston, who lived at 334 Beacon with his mother and step-father, Bessie Woodbury (Preston) Ong Cutler and Harold G. Cutler. After their marriage, Richard Preston was employed with the United Fruit Company (his grandfather, Andrew W. Preston, had been president of the company) and they lived briefly in New York City and then in Hamilton, where Martha Preston died in June of 1941.

James Proctor and his daughter, Esther, continued to live at 273 Commonwealth until about 1940, after which they made their home in Ipswich.

The house was shown as vacant in the 1941 City Directory.

On October 4, 1940, 273 Commonwealth was acquired from James Proctor by the American National Red Cross as an annex to the headquarters of its Boston Metropolitan Chapter at 17 Gloucester, next door.

17 Gloucester and 273 Commonwealth remained the Red Cross headquarters until about 1971.

On May 20, 1971, Andrew Shenk acquired 273 Commonwealth and 17 Gloucester from the American National Red Cross and the A. C. Ratshesky Foundation (which had donated 17 Gloucester to the Red Cross for its use).

In December of 1971, the Red Cross applied for permission to convert the property into a professional school (the Juliet Gibson School), two apartments, and a dormitory.  The application was denied and the Red Cross’s appeal was dismissed.

On September 12, 1972, Charlotte Goodman took possession of 273 Commonwealth and 17 Gloucester through foreclosure of her mortgage to Andrew Shenk, and on September 27, 1972, she sold both properties to Richard George and Mitchell George.

They subsequently converted 273 Commonwealth into twelve apartments and 17 Gloucester into eleven apartments.  In December of 1975, they entered into a mortgage on 17 Gloucester which was foreclosed in June of 1976.

Looking east on Commonwealth with 273 Commonwealth in the foreground (ca. 1942), photograph by Bainbridge Bunting, courtesy of The Gleason Partnership