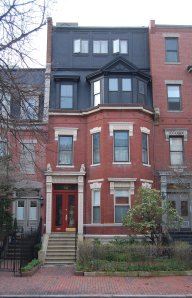 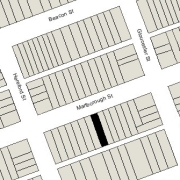 The land on which 348-362 Marlborough were built was acquired by George Wheatland, Jr., on May 10, 1872, from a real estate investment trust formed by Grenville Temple Winthrop Braman, Henry Dwight Hyde, and Frank William Andrews. It was part of one of several parcels they had purchased on March 1, 1872, from the Boston Water Power Company, of which Grenville Braman was the former treasurer.

Click here for an index to the deeds for 348 Marlborough, and click here for further information about the land between the south side of Marlborough and Alley 428, from Gloucester to Hereford.

George Wheatland, Jr., subdivided the property into eight lots, seven with 23 foot frontages and the eighth, at the corner of Hereford, with a 24 foot frontage. He then built houses on the lots at 348-362 Marlborough, each of the same design, with the entrance on the left and a bay on the right.

The houses probably were designed by architect Obed F. Smith. No architect is indicated on the permit applications. However, the final building inspection report for 354-356 Marlborough indicates that the architect was “F. O. Smith.” There was no architect named Smith with those initials listed in the 1878-1880 Boston Directories and it appears likely it was meant to be O. F. Smith. Obed F. Smith designed a number of houses for George Wheatland, Jr., at this time, including six houses (381-391 Marlborough) of very similar design.

348-362 Marlborough all were started in 1878 or 1879 and appear to have been completed within a year. From the deeds and original permit applications, it appears that 348-350-352 Marlborough were built first, then 354-356 Marlborough, and then 358-360-362 Marlborough. The lots were transferred to one of the three owners of the land as the houses were constructed; each house was then sold after it was completed.

The original permit application for 348-350-352 Marlborough (one application for the three houses) was submitted on December 3, 1878, by George Wheatland, Jr., William D. Pickman, and Richard Sullivan Fay (William P. Fay’s brother).  George Wheatland, Jr., was identified as the builder on the permit, but an April 4, 1879, article in the Boston Journal indicated that the houses were being built by Vinal & Dodge, masons.  The article also noted that construction was well advanced and that the three houses were “roofed in.”

On July 12, 1879, 348 Marlborough was purchased from William Pickman by Mrs. Sarah Augusta (Putnam) Heath, the widow of merchant John Andrew Heath. She previously had lived at 20 Marlborough. Her adult sons, John Andrew Heath, Jr., and Nathaniel Heath, both stockbrokers, lived with her.

John Heath married in June of 1886 to his first cousin, Caroline Putnam Newhall, daughter of Thomas B. Newhall and Susan Silver (Putnam) Newhall.  After their marriage, they lived with his mother and brother at 348 Marlborough.

Sarah Heath died in November of 1901. Nathaniel Heath and John and Caroline Heath (and their children) continued to live at 348 Marlborough during the 1908-1909 winter season, but moved thereafter to Swampscott.

On October 25, 1909, 348 Marlborough was purchased from John and Nathaniel Heath by Wallace Clement Sabine. He and his wife, Dr. Jane Downes (Kelly) Sabine, made it their home. They previously had lived in an apartment at 481 Beacon.

Wallace Sabine was a physicist who founded the field of architectural acoustics, serving as a consultant in the design of various Harvard Buildings, Boston Symphony Hall, and other major structures.  He was a professor of physics at Harvard and served as Dean of Harvard’s Scientific School.

Jane (Kelly) Sabine was a physician and surgeon, and was one of five women surgeons elected to the American College of Surgeons when it was organized in 1913.

During the 1916-1917 winter season, the Sabines were living in France where Wallace Sabine was an exchange professor, and Jane Sabine was on the surgical staff of the first Red Cross hospital in Paris.

While the Sabines were in Europe, 348 Marlborough was the home of Kenneth Moller and his wife, Elizabeth Soule (Sweetser) Moller.  In 1916, they had lived in Providence, where he was a mechanical engineer with the Jenckes Spinning Company.  By 1918, they had moved to 393 Beacon.

Wallace Sabine died in January of 1919. Jane Sabine continued to live and maintain her medical office at 348 Marlborough (listing herself both as Mrs. Wallace C. Sabine and Dr. Jane D. Kelly Sabine in the Blue Books).

As built, 348 Marlborough included a partial fourth floor at the rear of the house, extending about half way towards the front. Sometime in the 1920s, the fourth story was extended to be a full floor. The house is shown as a three and one-half story house on the 1922 Bromley map and as a four story house on the 1928 map.

On March 1, 1927, Jane Sabine transferred 348 Marlborough into her name and the name of her daughter, Janet Sabine. On August 26, 1929, Janet Sabine transferred her interest back to her mother.  The next month, she married Frederic Alexander Ley, a civil engineer and building contractor; after their marriage, they lived in New York City.

Jane D. Kelly Sabine continued to live at 348 Marlborough until her death in February of 1950.

On September 29, 1950, 348 Marlborough was purchased from the estate of Jane D. Kelly Sabine by Harry E. Thorson, a teletype operator for United Press International, and his wife, Harriet (Harriette) V. Thorson. They previously had been lodgers at 4 Marlborough.  The Thorsons occupied the house as a multiple dwelling, probably converting it into the four apartments for which it was already approved. They continued to live at 348 Marlborough until the early 1960s.

On August 10, 1961, 348 Marlborough was purchased from the Thorsons by Joseph L. Paley and his wife, Roxy Ann (Stoloff) Paley. They lived in one of the apartments until the mid-1960s, when they moved to Brookline.

On June 20, 1966, 348 Marlborough was acquired from John F. Kelly, Jr., by attorney Robert J. Pleshaw and his wife, Geraldine A. (Brown) Pleshaw. They previously had lived at 50 Peterborough. They continued to live in one of the apartments at 348 Marlborough until about 1971.

On August 10, 1971, 348 Marlborough was acquired from the Pleshaws by Ethel E. (Mastroyin) Baines, the wife of Keith John Cooper-Baines, a building contractor. They lived in one of the apartments. They previously had lived in an apartment at 447 Beacon.

On July 11, 1973, Ethel Baines transferred the property to her husband and Mac Clanning Grant, as trustees of the 348 Marlborough Street Trust.

On January 11, 1974, 338 Marlborough was acquired from Keith J. Cooper-Baines and Mac Clanning Grant by Sheldon Bennett. He lived in one of the apartments.  On February 10, 1981, he transferred the property to himself as trustee of the 348 Marlborough Street Realty Trust.

On June 9, 1983, Paul L. Bentel and Peter A. Bentel purchased 348 Marlborough from Sheldon Bennett. On November 4, 1984, they converted the property into four condominium units, the 348 Marlborough Street Condominium.