4 Marlborough was built ca. 1864 for William Sheafe, a merchant, whose wife, Josephine Augusta (Peckham) Sheafe, had died in February of 1863. At the time of her death, they lived in Brookline.

William Sheafe purchased the land for 4 Marlborough on December 29, 1858, from William Storer Eaton, who had purchased it on December 9, 1858, from the Commonwealth of Massachusetts. William Eaton had been a shipping merchant in the Calcutta trade and later was a founder of the National Tube Works. He and his wife, Frederica Warren (Goddard) Eaton, lived at 17 Hancock and later 17 Louisburg Square, and in about 1882 would move to 62 Commonwealth.

Click here for an index to the deeds for 4 Marlborough, and click here for further information about the land between the south side of Marlborough and Alley 422, from Arlington to Berkeley.

William Sheafe was living at 4 Marlborough with his five young children by May of 1865, at the time of the Massachusetts State Census, but moved soon thereafter.

On April 22, 1867, 4 Marlborough was purchased from William Sheafe by Sewall Henry Fessenden. He and his wife, Louisa Green (Bursley) Fessenden, made it their home. They previously had lived at 55 Chauncy.

Sewall Fessenden was agent for the Boston and Sandwich Glass Company.

The Fessendens continued to live at 4 Marlborough until about 1885, when they moved to 155 Beacon.

On January 29, 1885, 4 Marlborough was acquired from Sewall Fessenden by Dr. Franklin Fletcher Patch, a physician.  He and his wife, Mary Ann (Wentworth) Patch, made it their home and he also maintained his medical office there. They previously had lived (and he had maintained his office) at 23 Somerset.

Living with them were their son-in-law and daughter, Henry Augustus Gowing and Clara Elizabeth (Patch) Gowing. They previously had lived with the Patches at 23 Somerset. Henry Gowing was a dry goods and wholesale woolens merchant. They also maintained a home in Weston.

Franklin Patch died in November of 1891 and Mary Patch died one month later. Clara Gowing inherited 4 Marlborough and she and her husband continued to live there and in Weston.

By the 1893-1894 winter season, they had been joined by their daughter, Mrs. Mary Sophia Richardson, the former wife of Arthur Gregory Richardson, a chinaware merchant and real estate dealer.

By 1897, 4 Marlborough was the home and medical offices of Dr. Timothy Joseph Reardon and Dr. David P. Ronayne.  By 1898, Dr. Ronayne had moved to 17 Marlborough as a lodger, and several more doctors were listed at 4 Marlborough along with Dr. Reardon, including Dr. John Taylor Bottomley, Dr. Henry A. Cooke, Dr. Daniel Fiske Jones, and Dr. Franklin S. Newell. 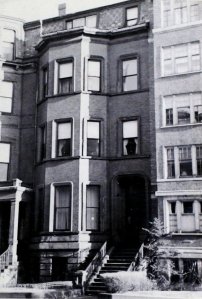 4 Marlborough was not listed in the 1899 Blue Book.

4 Marlborough continued to be a lodging house in 1906.

On July 24, 1906, 4 Marlborough was purchased from Clara Gowing by Robert H. Gardiner and John C. Gray, trustees for the benefit of Mary Alison (Bixby) Hill, the wife of Edward Burlingame Hill. She had established the trust at the time of her marriage in June of 1900, to hold and manage her property. The Hills previously had lived at 480 Beacon.

Edward Hill was a music teacher and composer of orchestral and choral works.  In 1908, he joined the faculty of Harvard, where he subsequently became a professor of music.

During the 1914-1915 winter season, the Hills were living elsewhere and 4 Marlborough was the home of Francis Russell Hart and his wife, Helen Bronson (Hobbey) Hart.  They previously had lived at the Hotel Vendôme.  Helen Hart’s sister,  Louise W. Hobbey, lived with them.  Francis Hart was Vice Chairman of the Old Colony Trust Company and treasurer of MIT.  Their primary residence was in Milton.  They continued to live at 4 Marlborough until mid-1916 when they purchased and moved to 474 Beacon.   Miss Hobbey moved with them.

By the 1915-1916 winter season the Hills were again living at 4 Marlborough and continued to live there until about 1919 when they moved to Cambridge.

On September 5, 1919, Alison Hill revoked her trust, and on September 10, 1919, the trustees transferred 4 Marlborough to her to hold in her own name.

During the 1919-1920 winter season, 4 Marlborough was the home of Lindsley Loring and his wife, Charlotte Blake (Cochrane) Loring.  Their primary residence was in Westwood.  He was treasurer of the Cochrane Chemical Company, founded by his wife’s family.

On June 25. 1920, 4 Marlborough was purchased from Alison Hill by Annie Louisa (Smith) Churchill of New Britain, Connecticut. the widow of Frederick Hosea Churchill.  On July 19, 1920, she transferred the property to her daughter, Rose Churchill.

In July and August of 1920, Annie Churchill applied for (and subsequently received) permission to make repairs and renovations, including repairs to the exterior stonework.  Annie and Rose Churchill spent the 1920-1921 winter season at the Hotel Vendôme.

On January 8, 1921, Rose Churchill transferred the property back to her mother.

On May 2, 1921, 4 Marlborough was purchased from Annie Churchill by the estate of dry goods merchant and banker Christopher Minot Weld to be the home of his widow, Marian (Linzee) Weld.  She previously had lived at 294 Beacon.  She also maintained a home in Milton.  Her four unmarried children — Elizabeth Weld, Margaret Minot Weld, Francis Minot Weld, and John Linzee Weld — lived with her.

Marian Weld and her daughter, Elizabeth, continued to live at 4 Marlborough until about 1940.

On September 19, 1940, 4 Marlborough was acquired from the estate of C. Minot Weld by real estate dealer Ray C. Johnson, who sold it the same day to Rev George Henry Elliot. He and his wife, Bessie Sophia (Wetmore) Elliot, lived in Fairhaven, where he was pastor of the Church of the Good Shepherd Episcopal Church.

4 Marlborough became the home of the Elliots’ daughter, Mabel Anna Lena (Elliot) Huson Ward, the widow of Clarence Earl Huson and former wife of George Washington Ward. She was an airline hostess. She previously had lived at 118 Marlborough, where she operated a lodging house. In October of 1940, she filed for (and subsequently received) permission to convert 4 Marlborough from a single-family dwelling into a lodging house.

In about 1943, she resumed using her former married name, Mabel E. Huson.

On December 30, 1944, George Elliot transferred 4 Marlborough into Mabel Huson’s name. She continued to live there until about 1945.

By 1946, the lodging house at 4 Marlborough was operated by Shirley Clifford Speed.  He owned 2 Marlborough, also a lodging house, and in August of 1946, installed fire balconies between the two houses.

S. Clifford Speed was a real estate dealer who converted many Back Bay houses into lodging houses and apartments.

Louise Day Hicks was a real estate investor and operator of lodging houses.  She and her husband, John Edward Hicks, an engineer, lived in South Boston.  She was a member of the Boston School Committee from 1961 and was an outspoken opponent of using busing to integrate Boston’s schools.  In 1967, she was an unsuccessful candidate for Mayor, but in 1969 was elected to the City Council.  In 1970, she was elected to the US Congress, but was defeated for re-election in 1972.  She was reelected to the City Council in 1973 and 1975, but then lost two successive bids in 1977 and 1981.

Mildred Baird died in April of 1983.  Mildred Baird’s share of 4 Marlborough was inherited by Louise Day Hicks, who continued to operate it as a lodging house.

On January 4, 1988, Louise Day Hicks transferred 4 Marlborough to her son, William Day Hicks, and on February 14, 2003, he transferred the property to himself and his wife, Anne Louise Hicks.

On November 30, 2011, 4 Marlborough was purchased from William and Anne Hicks by James T. Garnache , trustee of the Marlborough Manor Realty Trust.

In March of 2012, Marlborough Manor Realty Trust filed for (and subsequently received) permission to convert to property from a lodging house into a three-family dwelling, and in July of 2013 it received approval to reduce the number of units from three to two.

In February of 2018, the Marlborough Manor Realty Trust received permission to increase the number of units back to three.