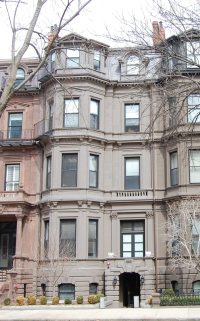 35 Commonwealth was built for ship owner, importer, and sugar refiner Elisha Atkins. He and his wife, Mary Ellen (Freeman) Atkins lived at 37 Commonwealth.

Click here for an index to the deeds for 35 Commonwealth, and click here for further information about the land between the north side of Commonwealth and Alley 423, from Berkeley to Clarendon.

Construction of 35 Commonwealth probably began soon after Elisha Atkins purchased the land (and possibly before he and his wife had taken occupancy of 37 Commonwealth) and was completed in 1873 (the house appears on the 1874 Hopkins map). It appears to have remained vacant for several years after it was built.

In early 1875, Elisha Atkins advertised 35 Commonwealth for sale.  A February 10, 1875, advertisement in the Boston Post by real estate dealer John Jeffries, Jr., offered “the beautiful new house No. 35 Commonwealth avenue, built in the most thorough manner under the supervision of N. J. Bradlee, Esq.”

The house remained unsold for more than three years, and in September of 1878 John Jeffries & Sons advertised in the Boston Post that the new, “splendidly built” house would “be sold at a price to suit the times.”

On October 1, 1878, 35 Commonwealth was purchased from Elisha Atkins by Julia Maria (Barrett) Marsh, the wife of Charles Marsh.  The Marshes made it their Boston home.  They previously had lived at 58 Boylston.  They also maintained a home on Jerusalem Road in Cohasset.

Charles Marsh was a partner in the wholesale and retail dry goods firm of Jordan, Marsh & Co.

Charles Marsh died in July of 1886.  Julia Marsh continued to live at 35 Commonwealth. Their son, Charles R. Marsh, lived with her.

In about 1890, her daughter, Edith Barrett (Marsh) Binney, also lived with her.  The previous year, Edith Binney’s husband, George Hayward Binney, fled Boston having defrauded several banks.  They had lived at 275 Marlborough.  By the 1891-1892 winter season, Edith Binney had moved to an apartment at 138 Marlborough.

On January 6, 1911, 35 Commonwealth was purchased from J. Sumner Draper by architect Arthur Little. He remodeled the house, including lowering the front entrance to street level, after which he and his wife, Jessie Maria (Whitman) Means Little, made it their home. They previously had lived at 148 Commonwealth (which he also had significantly remodeled). They also maintained a home in Wenham/Beverly Farms.

Living with the Littles were Jessie Little’s unmarried children by her first marriage, to Robert Lawrence Means: Claire Whitman Means and Jessie Keith Means. Claire Means married in June of 1912 to André Nicholas Reggio, an architect and real estate dealer.  After their marriage, they moved to 41 Pilgrim Road.

During the 1913-1914 winter season, 35 Commonwealth was the home of Robert Gould Shaw, II, and his wife Mary (Hannington) Converse Shaw. Their usual residence was at Boulder Farm at Oak Hill in Newton Centre.  Christine Converse, Mary Shaw’s daughter with her first husband, Charles Henry Converse, was a debutante that season and the Shaws had taken a house in town to introduce her into society.

During the 1914-1915 winter season, 35 Commonwealth was the home of John Lee Saltonstall, a stock and bond broker, and his wife, Gladys Durant (Rice) Saltonstall. Their primary residence was in Beverly, which he represented in the State Legislature in 1911 and 1912. They moved by the next season, and were living at the Hotel Agassiz at 191 Commonwealth by the 1916-1917 season.

By the 1916-1917 winter season, 35 Commonwealth was the home of George Bridge Leighton and his wife, Charlotte (Kayser) Leighton.  They previously had lived at 127 Beacon. They also maintained a home in Dublin, New Hampshire, where he owned and operated Monadnock Farms.

The Leightons appear to have spent a portion of the 1917-1918 season at 35 Commonwealth (where they were listed in the 1918 Blue Book). By March, however, they had moved to New York City, where they continued to spend the next winter season.

Also living at 35 Commonwealth during part of the 1917-1918 winter season (and listed there in the 1918 Blue Book with the Leightons) were John Gardner Coolidge and his wife, Helen Granger (Stevens) Coolidge. They also maintained a home in North Andover.

John Coolidge had served as a special agent in the American Embassy in Paris from late 1914 until October of 1917, when they returned to Boston. In 1918 he was assigned to the State Department in Washington DC. Prior to moving to Paris, the Coolidges had lived at 304 Berkeley during the 1913-1914 winter season.

By the 1918-1919 winter season, 35 Commonwealth was the home of Dr. George Jackson Hill, a physician, and his wife, Lucy Freeman (Winslow) Hill. They previously had lived in Beverly. They continued to live at 35 Commonwealth during the 1920-1921 season, but moved thereafter to 103 Beacon.

During the 1921-1922 winter season, 35 Commonwealth was the home of mining executive Edward Andrews Clark and his wife, Elizabeth (French) Clark.  Their primary residence was Fairholme at 3 Rockwood in Jamaica Plain. Edward Clark died in March of 1922.

During the 1922-1923 winter season, 35 Commonwealth was the home of Bayard Warren and his wife, Elizabeth (Sears) Warren.  They also maintained a home in Pride’s Crossing.  He was a trustee of estates. During thr 1920-1921 season, they had lived at 90 Marlborough.

On September 15, 1923, 35 Commonwealth was purchased from Arthur little by Rodman Paul Snelling and his wife, Eva Burnham (de Tréville) Snelling. They previously had lived at 151 Commonwealth.  They also maintained a home in Beverly Farms.

Rodman Snelling died in August of 1935; Eva Snelling continued to live at 35 Commonwealth until her death in 1936.

The house was not listed in the 1937 Blue Book and is shown as vacant in the 1938 City Directory.

On November 29, 1937, 35 Commonwealth was purchased from Eva Snelling’s estate by Rebecca Silberman.

35 Commonwealth was not listed in the 1937 and 1938 Boston Lists of Residents and probably was vacant.

By mid-1938, 35 Commonwealth was the home of James Albert and his wife, Mildred (Levine) Albert.  They previously had lived at 1 Raleigh.

James Albert was a former silk merchant in his father’s firm and in the late 1930s was president of the Chaffin Optical Company.  He also was an attorney and worked with the American Civil Liberties Union to defend pacifists and conscientious objectors during World War II.  He later practiced with his brother, Alfred, with whom he defended authors, publishers, and distributors of allegedly obscene works.

Advertisement for the Academie Moderne; Boston’s Back Bay, published by the Back Bay Association, 1941

Mildred Albert was a teacher and fashion expert.  In 1936, she founded the Academie Moderne, a finishing school, and in 1944 she co-founded the Hart Model Agency, credited as being the first modeling agency in New England.  She also wrote for local fashion publications and produced numerous high-profile fashion shows.  In April of 1990, Mayor Raymond Flynn declared her Boston’s “Official Grande Dame.”

Mildred Albert had operated the Academie Moderne in their home at 1 Raleigh and relocated it to 35 Commonwealth when they moved there.

On June 24, 1940, Mildred Albert purchased 35 Commonwealth from Rebecca Silberman, and on October 1, 1942, she transferred the property to Academie Moderne, Inc.

In October of 1942, the Academie filed for permission to convert the house from a single-family dwelling into a single-family, school, dormitory, and lodging house.  The permit was abandoned, but the school continued to occupy the house and it also became the location of the Hart Model Agency when it was formed in the mid-1940s.  In April of 1954, the Academie applied for (and subsequently received) permission to legalize the occupancy as a “dwelling and school for modeling.”

The Academie Moderne and Hart Modeling Agency remained there until the 1980s.

On January 19, 1988, 35 Commonwealth was acquired from George Brennan, Jr., and Madeline (Lynne) (Bergonzi) Musco, Louis Musco’s widow, by Thomas E. Langford and Frederick G. Pfannenstiehl, trustees. Thomas Langford was president of Bay State College and Frederick Pfannenstiehl was chairman of the board.

35 Commonwealth subsequently was leased from the trust by Bay State College for use as classrooms.

On March 30, 2018, Sea-Dar Construction, on behalf of 35 Comm Ave Associates, Inc., received a permit to convert 35 Commonwealth from a school into three residential units, including a penthouse addition and an interior garage.